In Pittsburgh, yesterday, the Penguins organization unveiled a 10-foot statue of their owner/Hall of Fame captain/2-time* Stanley Cup winner/3-time Savior, Mario Lemieux.  The statue is located outside their new arena, the Consol Energy Center.  (* As a player.  Mario won a third Cup, as an Owner.)

You have to give it to Pittsburgh… they know statues and they do them right.  Downtown is practically littered with giant bronze statues of hometown icons.  You’ll find 4 statues of former Pittsburgh Pirates outside PNC Park: Honus Wagner, Roberto Clemente, Willie Stargell and Bill Mazeroski.  Outside the Steelers’ Heinz Field, you’ll see a statue of founder Art Rooney Sr., sitting on a bench, smoking a fat cigar.  Heck, even Mister Rogers has a statue in Pittsburgh.
Baltimore is just catching on to the statue thing.  There’s a statue of Johnny Unitas outside the Raven’s stadium and one of Babe Ruth outside Camden Yards, but that’s it.  I took them to task last summer for commemorating their baseball players thusly: 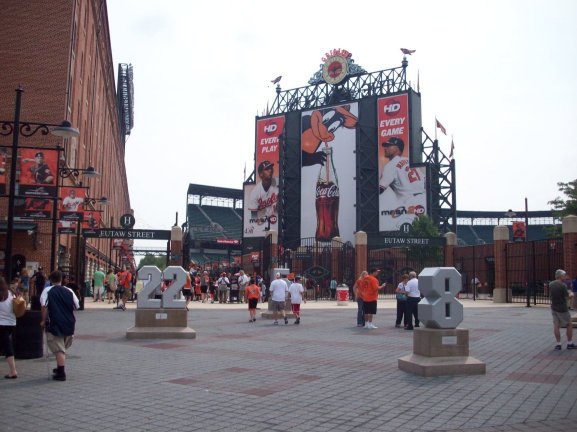 This “tribute” has all the warmth and humanity of Morse Code.
But by the end of the baseball season last year, they finally unveiled a statue for Orioles 3rd baseman Brooks Robinson.  Later, I read that they have plans to likewise celebrate their other Hall of Famers.  Presumably, they will have the “numbers” retired.
I would like to have been there for the unveiling of Mario’s statue, but of course, I have a life and it’s not in Pittsburgh, so I had to wait for the reports to filter onto the Internet.  So let’s have a look: 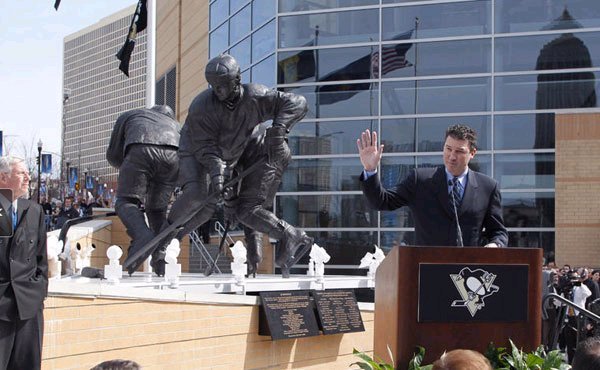 Entitled “Le Magnifique,” the statue captures a moment from a 1988 game against the NY Islanders, where Mario took a pass at the blue line, split 2 defenders (who ran into each other) and skated in to bury a shot behind the goalie.
The Pensblog, reacting to some behind-the-scenes tweets, had video up on this goal before the statue was even uncovered.
I love the fact that this statue has the 2 “other” dudes in it, Jeff Norton and Rich Pilon, who basically function as pylons.  Right after I saw it, I wondered what those guys thought of being sculpted into the scene.  At least one of them, Pilon, took it in stride, saying, “If you’re going to get beat on a play and it’s there for everyone to see forever, it might as well be Mario.  He did that to a lot of defensemen.”
As with the other statues in town, (not including Mister Rogers, whose likeness is more “impressionistic”), the detail was impressive. 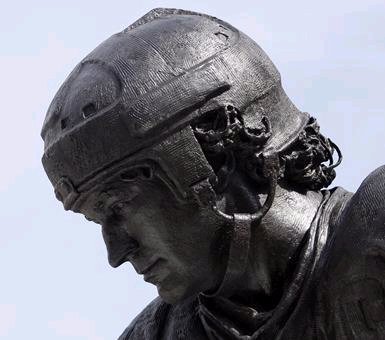 YAY for statues of guys with French names! We're quite fond of those here in Louisiana.

Mister Rogers has a statue in Pittsburgh? I know where I'm making Cassie take me when I visit.

I like the statue. We have a few here including one of Elvis Presley and Huey "Lead Belly" Ledbetter. There are also some very ugly "artistically decorated" catfish statues scattered around town.

I have a thing for statues--especially at stadiums. The Mudhens actually have a couple nice ones, as do the Indians.

Milwaukee has a Fonzie one. I think it was erected before he jumped the shark.

I'm not crazy about the Mr. Rogers statue... it looks like it was made out of shingles.

Baltimore has done similar things with the decorated sculptures around town. First the did fish, which artists decorated using various themes. Then a few years later, they did the same thing with crabs.

I'm just wondering who the Mud Hens would have a statue OF? Jamie Farr? Tony Packo?

There are so few "greats" in hockey, but Mario is certainly among their ranks. When I was growing up, I loved the Pens purely because of Lemieux, and I still stand by that. As for Mr. Rogers...I've heard stories that he was an ex-special forces guy, who had all sorts of confirmed kills or something. Respect for the sweater.

"I Like Mario," said his Mom to end an interview. "Cajun" indeed. Tough people, also known for their dry wit and resilient strength.
As for Mario, "SIMPLY the BEST"..

I did not know that Lemieux means "the best" so glad I did not skip ahead.

I love Mario for saving the Pens, in several different ways. I cannot imagine what it would be like if the team were no longer here. I did have to chuckle when during his statue speech, Mario said something like he appreciated that the fans left him alone as he lived his life here (they would say hi maybe, but move on). That surprised me, considering how rabid fans around here can be. Of course one would imagine that Mario is not hanging out at Denny's or the mall...

And for the uninformed, what do the 22 and 8 represent?

Mario was one of a kind. You just don’t see people his size that have that particular skill set. What I wouldn’t have given to see Mario play without the chronic injuries, with today’s rules that crack down on obstruction. He would be absolutely unstoppable.

Sorry to have to burst your bubble, but those stories about Mister Rogers being a Special Forces guy are an urban legend. He was never anything but a mild-mannered Presbyterian minister and child advocate. I would provide the link for the Snopes post on it, but I’m too lazy.

I know they used to use Tina Turner’s “Simply the Best” whenever there was a Mario Event, but I never knew how literally applicable it was.

I didn’t know about “The Best” either, until the press for this statue began to circulate.

I’m glad that the players find Pittsburgh a peaceful place to go about their business. I suspect that most residents would consider it rude to get all up in stars’ faces when they’re out in public.

The 22 and 8 from the first picture are the Orioles jersey numbers of Jim Palmer and Cal Ripken. The courtyard also features the numbers of the other Orioles in the Hall of Fame, like Earl Weaver, Brooks Robinson, Eddie Murray and Frank Robinson. See that’s my point. The Orioles chose rather antiseptic sculptures of numbers, rather than actual people. But that will change over the next few years, thank goodness.

I think it's kind of odd how they decided to use that play (complete with helpless Islander defensemen) to immortalize Mario. I guess the Cup raising pose is a bit cliche, but what about something from his comeback game? Idk...splitting hairs, I guess.

The thing that makes Lemieux unique is his perseverance (and his unbreakable ties to the Pens franchise in Pittsburgh) but when you see the stats and you think about how many points per game he averaged, then multiply it by the man games he missed over his career (not counting the year and a half lost to the lockouts) one thing becomes abundantly clear: Lemieux is actually *better* than Wayne Gretzky.

That's what I think... head to head, I'd take Mario. Same skills, bigger body. Wayne was great, but his was a completely "finesse" game. Mario was a perfect blend of power and skill with a dazzling grace in both his hands and feet.

In picking that pose for the statue, they wanted a pose where he was splitting the defensemen (which he did frequently) to demonstrate his perseverance both on and off the ice.