A Picturesque Day at The Yard

In my previous post, I described my mini-ordeal of trying to buy an Orioles ticket from their box office.  Well, yesterday was the game for which I bought the ticket.

Because it was considered a “premium” game, (meaning it was a “premium” opportunity for price gouging), I decided to get a “cheap seat,” in the upper deck.  Not that $38 for what it usually a $20 upper deck seat is really “cheap,” mind you, but it was better than the alternative of spending $50 to sit where I usually do, in the left field club seats.

Because I’m also slowly but surely redecorating my apartment with canvas art, made from my own photos, I figured this would be a good opportunity to get a good shot of Camden Yards.

It was a 4:00 game, so that meant I needed to get down to my pre-game watering hole, The Bullpen, by 2:00.  Because I suspected it would be a crowded game, I actually got there even earlier, around 1:40.  I should have made it 1:00, because the place was packed.  Being a VIP has its advantages, but securing a seat isn’t one of them.  But I managed to weasel my way into a seat at the back of the bar. 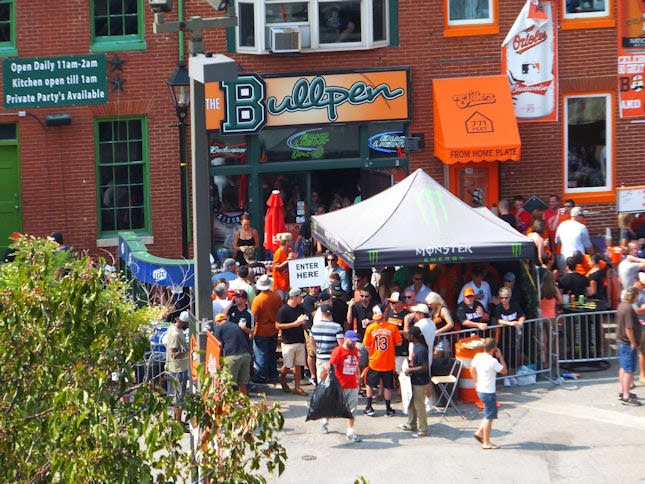 I didn’t find any gap-toothed honeys to talk to, but I did find myself among a group of guys about my age, who were on a multi-stadium tour.  They were also going to see games in Pittsburgh, Cleveland, Detroit and Chicago.  As a veteran of 3 of those 4 parks, I inserted myself into their conversation, hoping to leave them with the impression that not all Baltimore fans are numbskulls.

No, it was fun.  I enjoy meeting people over the shared love of sports, and we spent a good hour shooting the breeze about the relative merits of different ballparks.  After the guys wandered off to have a look around The Yard, I ended up talking to a 25-year old kid from Cleveland, who was sitting beside me.  Poor kid… only 25, and he already thinks he knows from suffering.  If he continues to follow the Browns and Indians, he has much more agony to look forward to.

I didn’t stay at The Bullpen as long as I usually do; there was a promotion going on at the ballpark.  It was Wild Bill Hagy Hat Giveaway Day.

If you don’t live in Baltimore, I’m sure you don’t know who Wild Bill Hagy is, so I’ll explain.  Wild Bill was a Super-Fan, back in the Memorial Stadium days.  He was a burly, wild-bearded cab driver from Dundalk, who would get loaded on the Budweiser he brought to the game with him, (back when you could still do that), and lead Section 34 in the “O-R-I-O-L-E-S” chant.  It was kind of like doing the YMCA, only with more leg action. 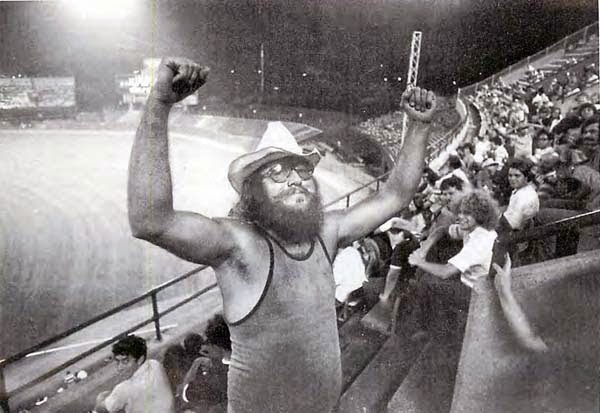 Anyway, he was a legend around here, up to and after the day he died.  So with the Orioles celebrating their 60th anniversary this year, they decided to honor their most infamous fan, by giving away facsimile hats.  The hats were to go to the first 20,000 fans, and because I was expecting a pretty full house, I wanted to make sure I didn’t get frozen out.  All was well though… I got my hat, and it just barely fit.  (I was surprised, not many one-size-fits-all hats will fit over this giant Bluz noggin.)  They seemed to fit everyone else though… 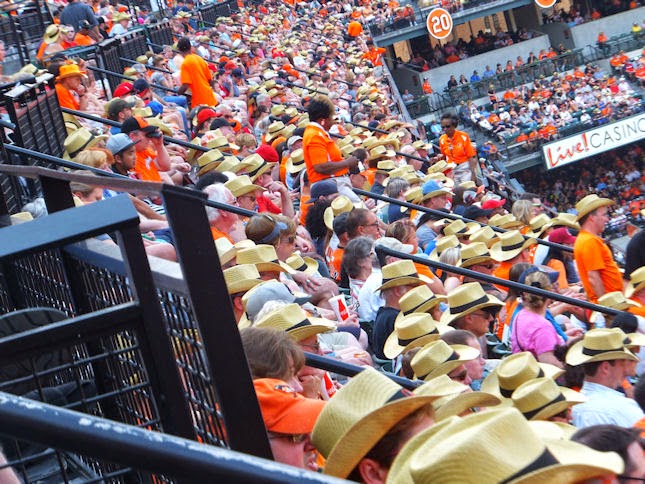 I ended up sitting on an aisle, beside a 40-something year old blonde, with whom I conversed on and off during the game.  She was tiny; couldn’t have been more than 4’11”, and it looked like about a quarter of her body weight was accounted for in boobage.  Not that I have a problem with that… she just had to be real careful when eating peanuts.  Had to make sure she didn’t drop any shells down there.

The game was good enough… the Orioles won big, 10-3, mostly off of three home runs.  But my primary objective was to get a decent ballpark shot.  I took pictures at various times throughout the game, hoping that one would be acceptable.

In retrospect, I should have adjusted my picture size from 4:3 ration to 16:9, (or in other words, wider.)  Anyway, I’ll show you the best three, ask you what you think. 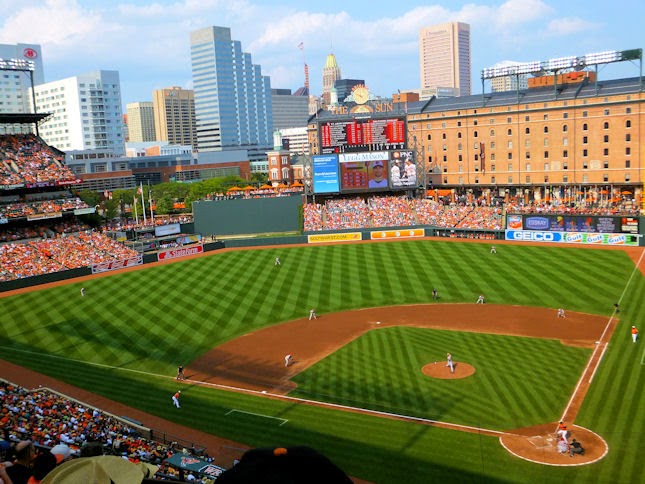 Took this one from my seat.  Not crazy about the 2 heads at the lower left foreground.  I could probably photoshop them out, but when the shot is blown up for framing, I’m afraid the evidence will be visible.  I like the action though, with the pitcher in motion.  I also like the shadow on the field, which looks to me like “old time baseball.” 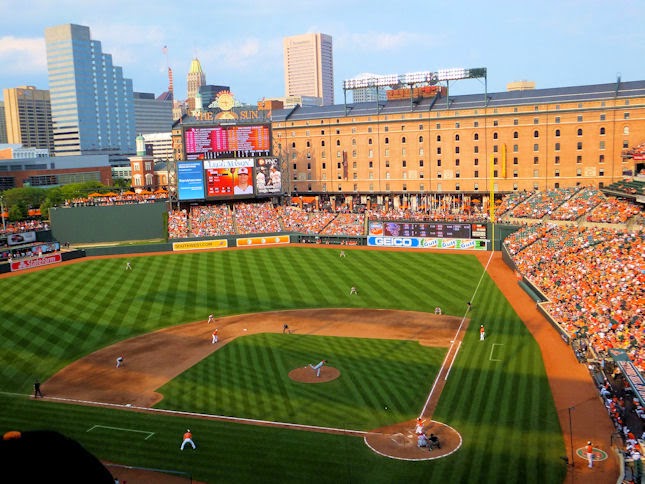 Also from my seat, and again with the big head at the lower left.  And if I crop the bottom, I’d also crop out the batter at home plate.  Don’t like that you can’t see any of the left field seats.  I do like that you can see the ball on the way to the plate.  And the shadows. 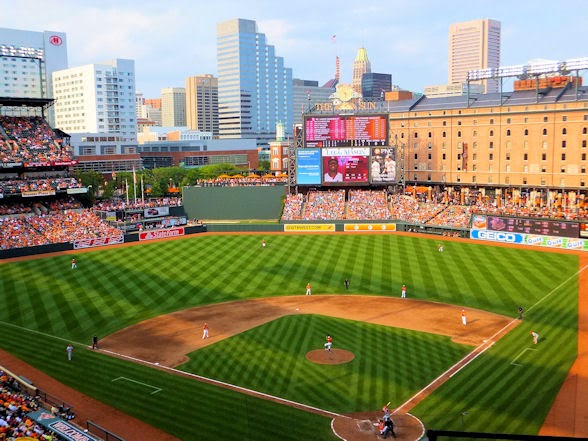 For this one, I got up and moved a couple sections down.  No heads, good shadows, pitcher in windup, can see left field stands, but not right.  Definitely needed a wider shot.  But, I think this is the best of the lot.

So what do you think?  Which of these three would make the best frame-able shot?  Or should I try again with a wider angle?

Director's DVD Commentary: Gah! I totally forgot to mention that right next door to Camden Yards, this weekend, the Ota-kon convention is going on, celebrating Japanese pop culture and animation.  Going to and from The Yard was like passing through Freak Central. With all the people dressed in costume, I saw more girls wearing heavy makeup and bunny ears than you'd find at Hef's Grotto.
Posted by bluzdude at 2:16 PM