The Tao of Te'o

I’m really disturbed about the whole Manti Te’o story.  You've heard about that, right?  The Notre Dame linebacker that was a victim of a hoax, wherein some dudes struck up an online friendship with him, using the persona of a hot Polynesian babe, and got him to fall in love with her?  And then on the day his grandmother died, the pranksters told Te’o that the girl died of leukemia.

It’s not so much the hoax that bothers me, which was bad enough, but all the people that immediately came crawling out of the shadows to make it worse, by asserting that Te’o was in on it the whole time, as part of a publicity stunt to draw sympathy and votes for the Heisman Trophy.  They denied anyone could ever become so attached to someone they never met in person.

Right off the bat, I was inclined to believe Te’o, because I could totally see something like that happening.  I know for a fact that you can develop serious feelings for someone you’ve never met, because it’s happened to me.  Of course, my things happened some time ago in chat rooms, before Skype, FaceTime or video chatting was common.  I guess I was lucky enough not to get mixed up with a sociopath.

And with Te’o, you have to remember that for all the notoriety that comes with being a big-time collegiate athlete, he’s still just another broke-ass college student.  These guys can’t accept a sandwich, let alone plane fare from Indiana to California, lest he run afoul of the NCAA.  His actions could cause repercussions throughout his school’s football program, so his hands were tied as far as meeting the girl.

Once he found out the nature of his “relationship,” he told school officials, but they sat on the information until after the BCS Championship game.  I understand this as well.  The media frenzy around these kids was bad enough without throwing this hunk of red meat to the circling sharks.  Yeah, he probably shouldn't have mentioned his “girlfriend’s” death again in the media scrum, but I think he was towing the company line to keep the ruse intact.  I don’t think that should label the kid as complicit in the scam.

Others wonder why he couldn't find a suitable squeeze on campus.  The point is valid, but consider that this was a dude from Hawaii, for which Indiana will never EVER be mistaken.  Maybe he just wanted a good lei.

Director’s DVD Commentary: OK, I apologize for that, but how can I possibly pass up such a juicy lei joke?

It’s sad to me that the whole affair had to become national news.  The dude’s got to be mortified by all the attention being paid to his “love” life.  Isn't there something more pressing we could be worrying about? 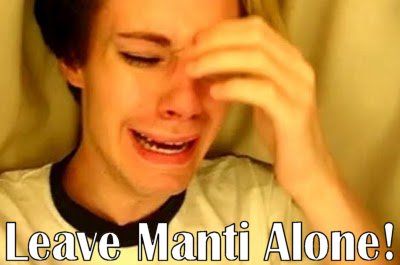 I’ve got enough material from my own late-90s chat-room escapades to fill a half-dozen posts or more, and I may spill them at some point.  But the thing is; you certainly CAN become attached to someone online.

I used to visit a particular chat room, along with quite a number of other “regulars.”  We lived all over the globe, but would come together here each night to yap about whatever was going on.  It was just like a real neighborhood.  Friendships were made and broken. Some people acted like assholes.  Some people got picked on and others would flock to their defense.  There was a great camaraderie among us.

I remember one time some newcomer to the room trolling for cyber-sex and acting like a dick.  One of the girls in the room told him he could find all the sexy-talk he wanted by pressing [Alt/F4.]  She took a well-calculated gamble that the guy wouldn't know that [Alt/F4] closes the application.  We LOLed our asses off when his avatar promptly disappeared.

I usually just laid back and tried to make people laugh.  Sometimes I’d rate my night’s work by tallying up how many “LOLs” I got.  (No, I didn't make a spreadsheet.)

There were some people there that were very kind to the newbie that I was, and helped me out a great deal by making avatars for me and sending me various useful programs.   One person actually transmitted the full version Paintshop Pro 7 to me when I asked how I could make avatars too.

Someone made this for me and it became one of my favorite avatars to use.

Aside from the comments in the room, you could also Instant Message (IM) people for private conversations.  I had a number of people I would regularly IM with, and a couple of them turned into, well, I’m not quite sure what to call them.  “Very close relationships,” I suppose.

I may have had more money than a broke-ass college student, but not by much.  Airplane tickets or hotel reservations were things for which I needed to save up.  And I sure didn’t have the dough to hang on the phone, cooing sweet nothings to some girl in another country.  So we made do on the computer.

You can get very close and learn a lot about each other just by writing to each other.  I loved to use ICQ, (remember that?) which provided a split screen and real-time responses.  It was cool because you could see the person’s typing appear as it was happening, so could you evaluate their thought process and typing skill at the same time.

Sitting in a candlelit room and sipping wine in front of your computer screen, you could delve into your deepest self.  Sure some people may have used the distance to create vastly different versions of themselves, but I went the other way and engaged in brutal honesty.

I always looked for any story changes or inconsistencies, but I think my being honest brought out the truth from my chat-mates.  I know on my part, whenever we’d swap pictures, I’d include multiple shots of me from different times, with different people.  I figured that would let her know that I didn’t just pull some random shot off the Internet.  (And how much of a zero would I have to be to pull this mug off the internet to use in place of my actual picture?)

I eventually met a couple of ladies in real life and engaged in some serious monkey business, (no, not both at the same time... I totally would have told you about THAT already), but it took quite some time to get to that point.

But suffice to say, if something tragic had happened to one of them before we’d met face to face, I’d have been devastated, just like Te’o was.  The people may have lived very far away, but to me, they were right in front of me every night.  So like I said at the outset, I believe the kid.  It could happen.

I bet it won’t happen to him twice…
Posted by bluzdude at 7:02 PM