Last week was pretty nice… temps in the 80s, relatively low humidity… So I had the chance to get out and about a little.

Back to Back
I never plan to do this, but sometimes it just works out this way.  I saw three Orioles games last week… Saturday (8/5) and then both Tuesday and Wednesday.  The Wednesday game against the Mets was my original target because it was a player-designed tee shirt giveaway day.

But then Sitcom Kelly and her sister were going to the Saturday game against Oakland and asked me if I wanted to go too.  (Of course I did!)  And then the Orioles announced that they were doing a second “Social Media Night” of the season on Tuesday, which in addition to a seat for the game, include free food, 2 drinks, a free raffle, a tee shirt, and live Q and A with Orioles closer Zach Britton.  I had wanted to go to the first one they did this season, but I was out of town.

So, I had two opportunities to see games and neither of them was for the game I really wanted to attend.  But given my complete lack of anything else going on in my life, why not just go anyway?  So I committed to the back to back games.

Saturday’s game was (Orioles’ shortstop) JJ Hardy Replica Orange Jersey day, so I knew it was going to be crowded.  As you may recall, a couple years ago I was suckered into lining up early to snag an Adam Jones replica jersey, but it was such a flimsy, silk-screen piece of crap, I gave it away the next day.

Still, with expectations lowered, I wouldn’t have minded getting one of the giveaway jerseys.   The game started at 7:00, but when I passed by on the way to the bar, I could see the main entrance was swamped. 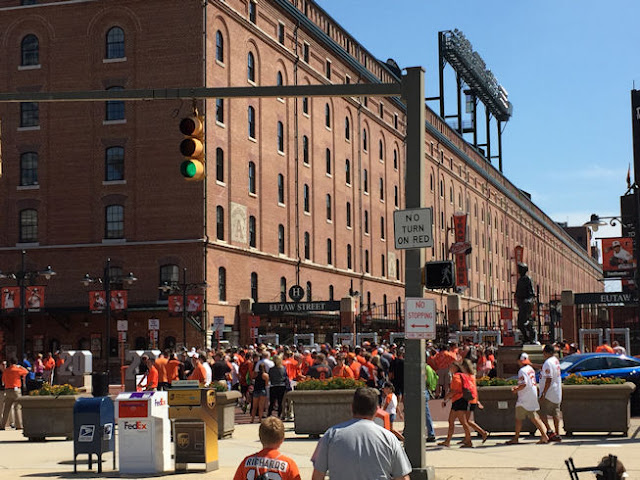 So right off the bat, I wrote off any chance of getting a jersey, because they were only going to the first 20,000 people.  It was not worth spending 2 hours in line, in the hot sun… not when I could be at The Bullpen, putting away some cheap-ass beer.

We finally made a move to leave the bar around 6:00… I thought maybe there was still a chance to get a jersey, but they were long gone.  We had some comfy seats in the lower bowl, in the left field corner. 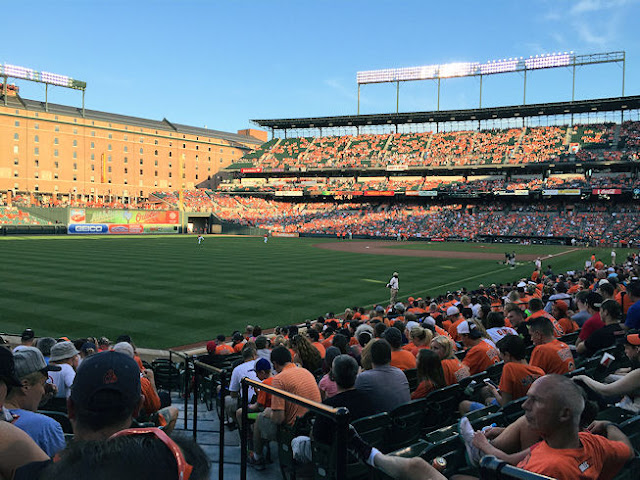 I was really excited about the Social Media Day thing… You could sit in various places; I opted for the rooftop deck over the green “batter’s eye” wall in center field.  I have a friend at work who has sat there before and she said that was where all the babes hung out.  I’d been up there a number of times, but never during the game.

It ended up being a really nice time.  The food was good, (you know, for hot dogs and hamburgers), and it was fun seeing Zach Britton interacting with the fans.  He’s the “closer,” and when he comes into the game in the 9th, they always play “For Those About to Rock,” because he’s a big AC/DC fan.  In answering a couple of questions about them, (not from me), he indicated that while he liked them too, it was his Dad who was really the big AC/DC fan. Said Dad was always playing AC/DC as he worked on his car in the garage.  While I liked hearing that, it really just made me feel O L D! 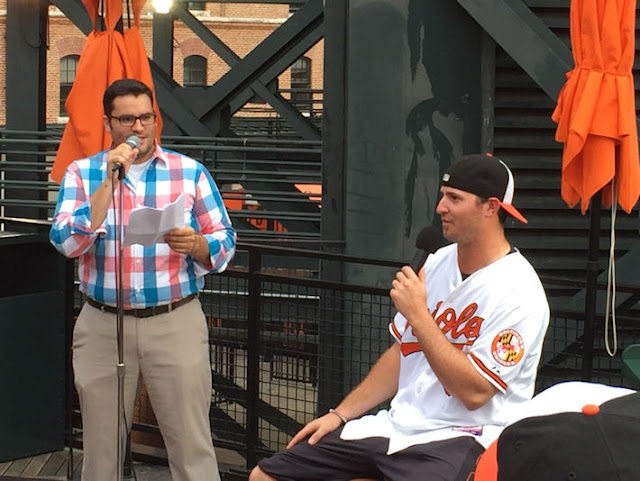 Zach Britton, wheeling and dealing with the unwashed public. The guy at the mic stand is the Orioles public address announcer.

After the Q and A, I nabbed a seat at the bar and awaited the start of the game… which included an additional 50-minute rain delay, even though nary a drop of rain fell!  They must have seen something coming on radar, which then dissipated or changed direction.  At least I was in a good spot to ride out a storm… 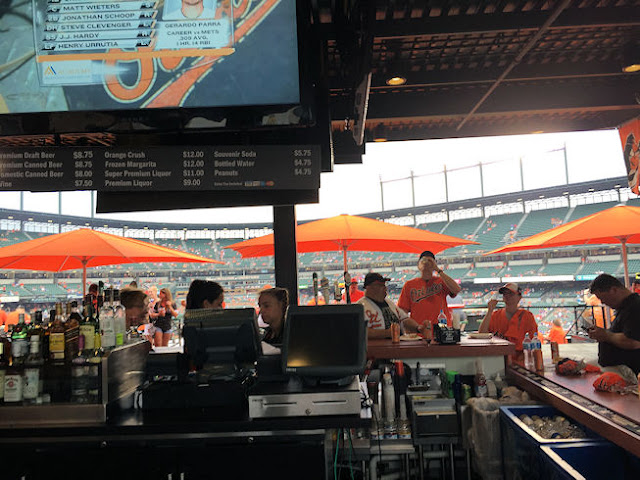 Once the game got underway, I took my seat in the second of two rows, right behind the bank of center field cameras. 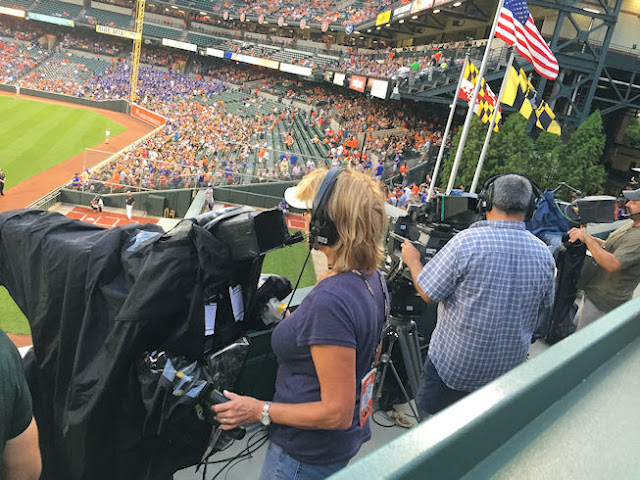 I admit it; I might have been somewhat distracted throughout the game.

This was the view when I wasn’t looking at the hard-working members of the broadcast team: 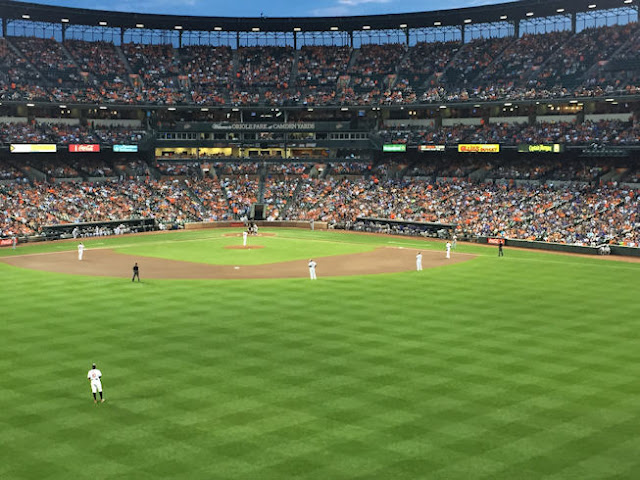 And just for the heck of it, here’s a good look at the area I was in. 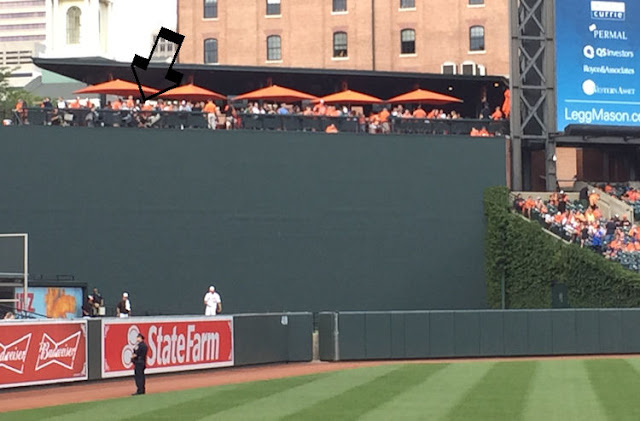 One of the things I liked about sitting up there was the built-in table in front of you.  Unfortunately, I had to use it as an elbow support for most of the game.  The seats were basically wide metal bar stools, with no backrest.  It took its toll on my back, and eventually my elbows.  Luckily, the free tee shirt made a good elbow pad.

As for the “babes” my co-worker told me about, she was right, there was a babe sitting right beside me and she was totally my type.  And if I were 20 years younger, I probably would have asked her out.  I would have had better luck with the married camera lady.

Anyway, the O’s lost 5-3, but I had a good time anyway.  I’m looking forward to going to another Social Media Night next year.

The game the following night was more or less uneventful.  I went by myself, did pre-game at The Bullpen, went to the game and sat down in the left field corner. 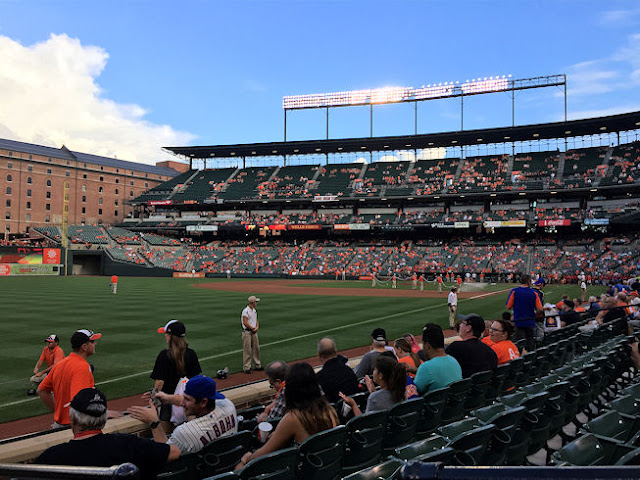 And of course, I got another Orioles tee shirt.  Because you can never have enough orange tee shirts…  In fact, I did a quick count and I have 10 of them in my current rotation.  That doesn’t count a couple of orange Bowling Green shirts.

And this doesn’t include the one I’m wearing right now.

The Orioles won Wednesday’s game 5-4, on a walk-off home run in the bottom of the 9th.  Sadly, I had already left.  I mean, it was a weeknight and I’d already been out late the night before.  I left after the 7th inning because they were starting to change pitchers a lot, no one was hitting, and it was beginning to look like an extra innings game.  I figured I could watch the end at home.  Oh well…

I briefly considered going to the game on Sunday, but wisely thought better of it.  That was enough baseball for one home stand.  The O’s will be on the road until the end of the month.  I’m sure I’ll be ready to go again by the time they get back to town.  I’ve been to 17 Orioles games this summer… well on my way to a new personal record.  (Last year I went to 18, but that included 2 playoff games.)

In Other News…
I just want to show you this quick thing, because it’s too good to save for next week…

A pro-choice group called Majority Ohio has made their own video, where they used the Center for Medical Progress’s same editing tactics to depict well-known anti-abortion conservative speakers into looking like they’re taking pro-choice positions.

“This video was edited with the same attention to detail and devotion to accuracy as recent videos released by the Center for Medical Progress,’’ said ProgressOhio Executive Director Sandy Theis.”

One of the people who appeared in the video, Michael Gonidakis, president of Ohio Right to Life, had this to say: "It's a darn shame that the abortion industry spends time and money creating sophomoric videos mocking people who are trying to protect pregnant women and their children. Clearly the video creators lack any moral character or regard for anything but profits arising from aborting babies and selling their body parts.  This video and the people who created it are pathetic at best."

Yeah, not so funny when it’s YOUR words being twisted around, is it Skipper?  Let’s see if we have this straight… when your opponent uses deceptive editing, it’s a “sophomoric video,” but when your guys do it, (in addition to lying to people to gain their trust and then leading them into a damning conversation), it’s protecting women (from themselves?) and children (who are not sentient and are the size of a grape).

Got it.  You’re hypocrites.  Glad we cleared this up.


By the way, if you want to see the video for yourselves, you can click here.
Posted by bluzdude at 8:11 PM