After the “heavy” previous post, this one will be much more fun.  It all started with a video.
Well, it really all started where I attended high school, in rustic Whitehouse, Ohio.  My school, Anthony Wayne, was known around the state for their marching band.  Soon after I began attending, I learned that Friday nights were earmarked no only for football, but the pre-game and halftime showcase for the Anthony Wayne Marching Generals.
If I were seeing them now, for the first time, I’d describe them as having “swagga,” however that term did not yet exist.  These cats could strut.
A couple of weeks ago, my brother sent me a video he found on Facebook, of the 1982 Marching Generals pre-game routine.  I was knocked out; I hadn’t seen our band in action since shortly after I left high school.  The whole thing went exactly like I remember it.
The first things you notice are the uniforms.  They don’t look like traditional marching band uniforms… they look like colonial generals.  Snappy and colorful in the royal blue, with red and yellow highlights, white spats and tri-corner hats, they’d fit right in at a Tea Party rally.  (Unfortunately.) 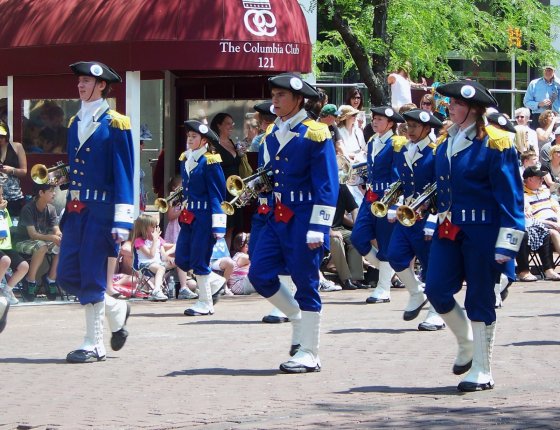 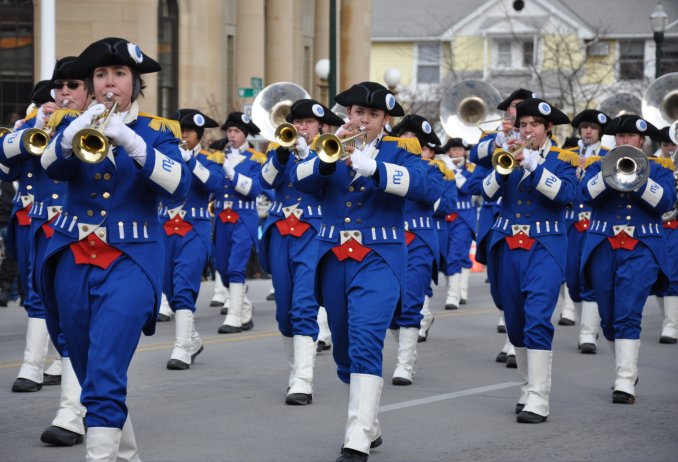 The 2008 Marching Generals in a parade somewhere that is obviously NOT Whitehouse Ohio.  Photo from refocusedlife.com
You should start the video now and let it load for a bit.  I know it’s over 11 minutes long, so I’ll help you skip around.
The video must have been shot on videotape and later converted into electronic media, so you’ll see some occasional lapses into snow or hiccups in the flow.  I’m guessing it was shot by someone that had a kid in the band.
To me, it’s like comfort food because they did this same pre-game routine for every home game.  It was tradition.  The band director, Robert Schumaker, had been there for years, thus lending continuity.  Senior trained the newcomers in the fine points of strutting, turning and timing.
The video opens with the band marching up to the stadium field, alongside the stands.  There’s only a minute of that, so once you get the gist, you can skip ahead.
The Marching Generals entrance onto the field is an exercise in tension and delayed gratification as they one by one, strut onto the sidelines and ring the perimeter of the playing field.  Watch how each one spins through that corner.  I like watching the variance in how each one does it, depending on the size of their instrument.  (Musical instrument… these are high school kids here!)
You’re also struck by how large this band is.  I don’t know the exact number but it’s enough to ring three sides of a football field, I’ll tell you that.  I think they start out a little raggedy but when the camera pulls back, you can see the impeccable timing of their steps and arm movements.
OK, you can skip ahead to the 4:30 mark, where the band aligns along the sidelines, with the percussion in the end zone, where they begin the slow-motion lineup along the goal line.  Again, it’s like bottled energy, just waiting to be set free.
At the 6.00 mark, all hell breaks loose in what I call the Assholes and Elbows drill.  In fast motion the band goes flying down the sidelines with knees high, elbows pumping and instruments waving until they form a block at the right end of the field.  I love that shit.  It’s like highly controlled chaos.
I remember being down by that end of the field for one performance and couldn’t get over how hard they were stepping.  You could hear every thump of their feet.  Those kids were working hard!
At 7:20, they begin the march down the field playing our school fight song.  Our school was an exception because we had our own unique song.  The other schools in our conference all used the more famous fight songs from USC, Notre Dame, Wisconsin, etc.  So don’t feel bad if you don’t recognize ours.  You won’t.  But we loved it.  Again, it was tradition.
From this point, you can watch or don’t, as they go on to do the National Anthem.  Sorry, there were no fly-overs, save for the occasional bat.  By the way, did you get a load of the surroundings?  There was nothing but farmer’s fields back behind the football field.  We were totally out in the sticks.
One last thing… the announcer you hear was my 11th grade English teacher, Mr. Williamson, aka: the Best Teacher I’ve Ever Had.  In English Lit class, he gave me more useful ideas about how to conduct my life than all other teachers combined.  I only regret that I never had the chance to tell him so.
After the band, there was the football game, but while I was there, it was usually an anti-climax.  We had a good team my sophomore year (my first year attending) but we sucked in the years to follow.
But still, our musical version of Friday Night Lights fostered the fondest of memories.  I am so grateful for the magic of videotape
Posted by bluzdude at 12:15 PM

In those outfits they look like they're ready for some kind of war re-enactment.

I love stumbling upon nostalgic videos. It's so great to re-live those memories for a bit.

My favorite part was "Mad Anthony Wayne" galloping across the field at the start of the show, headlong from one end to the other. "Mad Anthony" was usually a girl who had trained her horse from colt hood.

Since the Marching Generals are in better shape than th Fighting Generals, why not have four quarters of band and 15 minutes of football!

Jessica,
I always loved the outfits. And whenever you see those post-colonial uniforms in books, (and I did, when I googled Anthony Wayne, aka "Mad Anthony" Wayne), you can see that they're very close.

I'd looked up the band on YouTube a couple years ago but all I could find were things from the last few years. Finding this video from 1982 was really something.

Mary Ann,
Maybe they didn't do the horse in '82 but they sure used to... was very cool.

I thought the same thing as Jessica - the uniforms do have a decidedly "Colonial" look.

I'm always impressed by any group who can move in a synchronized manner. I have enough trouble line dancing - no matter how many times I get lessons.

Kernut,
Yeah, that was line dancing gone wild! They could really bust a move.

What a nerd you are! I played baritone in the marching band all four years of high school after my parents forced me to do it my freshman year and I ended up loving it, and I'm pretty sure anyone who wasn't actually in the band had no idea the band existed. Halftime was time to make out under the bleachers and go home to mix the meth or whatever real quick.

Mundane,
I'm a nerd?? I wasn't the one in a crappy band, missy. But I know a good one when I see one.

Hey! I left a comment here that didn't get posted! It was about the fact that I LOVE the high school marching bands in the Mardi Gras parades! Those poor kids are totally exhausted by the end of the night, but they really put on a show!!!

Judie,
Freakin' 'Blogger'... This is happening a lot... pissing me off.

I know I saw band members coming off the field; they were always streaming sweat. Those routines are taxing...

I was a dance team chick, so while I marched with the band, I really wasn't PART of the band. I loved learning how to march and all that, though.

Mrs. Bachelor Girl,
To me, these are two different things… playing an instrument (which I have no chance of doing successfully) and doing an intricate line dance.

You know, if I were designing a marching band, I’d put some electric guitarists using wireless amps, out there. My version of Whole Lotta Rosie would be legendary.

Oh man it is 2016 and it so fun to be a part of the band now. -Freshman Baritone

Thanks for the comment, Freshman Baritone. I trust you'll work hard to uphold the tradition. You can see how seriously we take this band! Be glad you're a part of such a rich history.