You know, this guy Pope Francis, I have to give him credit.  He’s really shaking things up, not only for the Catholics but for the whole political/religious national landscape.  And I’m having a great time watching all the politicians who tout their religiosity backpedaling from this bold, yet humble religious leader.

For me, it all goes back to the early 80s, when the “Moral Majority” reared its head, determined to spoil everyone's fun.  That’s when a socially conservative religious bloc decided to throw in en masse with the Republican party, in an effort to put Ozzie and Harriet back on TV.

The Republicans, happy to welcome any band of motivated, registered voters, took them in immediately.  Not that they actually changed anything… I mean, TV got even looser with nudity and language, and music got even more vulgar, although they did get parental warnings instituted.  Of course, the parental warning became the bait… that’s how kids knew where the good stuff was.

Anyway, the point is that they accepted this voting bloc and courted their votes aggressively by talking up religious aspects while campaigning.  But when it came to governing?  Not so much, at least not on a national level.  The GOP is now, and always* has been primarily concerned with promoting big business and business owners.

Their use of values-based voters was essentially a means to gain and maintain elective office.  And all it cost was a few speeches, or some bills put forth that everyone knew had no chance of passing.

Don’t believe me?  It’s all playing out right now, as the leader of one of the largest Christian denominations in the world, the one whose believers are taught is infallible with respect to the teachings of the church, is reclaiming the original intent of said religion, which clashes with the original intent of Republican politics.

Let’s look at some of the things Pope Francis has said recently, and I’ll tell you why the GOP is suddenly demanding for a greater separation of church and state.

1. It is our moral duty to prevent climate change.  Republicans lead the charge on climate change denial for the simple reason that they are bankrolled by the fossil fuel industry to an obscene degree.  Remember, when you hear “The Koch Brothers,” they run one of the largest coal, oil and fuel conglomerations in the world.  And the last thing they want is any cutback in drilling, mining or energy usage.

When Jeb Bush said that the Pope ought to leave the science to the scientists, he probably didn’t realize that the Pope is more a scientist than Bush is an oilman.  Rick Santorum, the poster boy for Catholic politicians, was in the same corner, disavowing what the Pope had to say, which led to an interesting observation from atheist Bill Maher.  On his show last week, Maher asked Santorum, “How is it that I agree with the Pope more than you do?”

It’s because the politician may believe in his religion, but he believes in the party line even more. 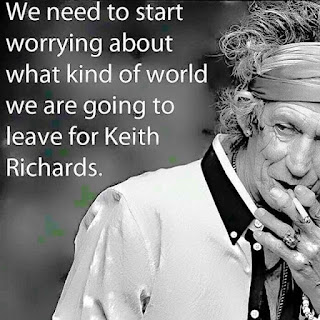 2. Women who have abortions can be absolved of their “sin.” This one was puzzling to me because I thought any sin could be absolved through the sacrament of confession.  But OK, if it couldn’t and now it can, because the Pope says so, what’s the problem?  That’s a completely religious argument decided by the authorized, historical leader of the faith.

The problem is that it goes against the anti-abortion orthodoxy of the religious conservatives, who seek to penalize women for the audacity of having sex without intending the pregnancy.  People like Ted Cruz, Mike Huckabee, Scott Walker and Santorum had a fit because they are not going to give up a wedge issue, just like that.  There is too much money to be raised by demonizing the sluts who would dare to visit Planned Parenthood. 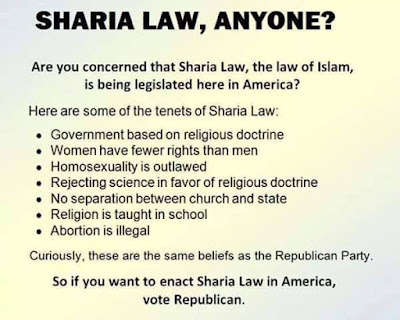 3. Unfettered capitalism is the “dung of the devil.”  That one cracked me up.  What an orator.  He further said the poor have “sacred rights” to labor, lodging, and land.

That can’t be further from the Republican position, which is, “If you weren’t born with a silver spoon in your mouth… well, then it sucks to be you. Be sure to clean up before you go, thank you.” 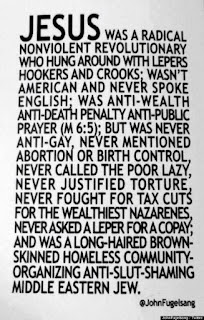 They don’t want to hear anything about feeding the poor or healing the sick, or anything else that Jesus actually said.  If you ask them, Jesus wants them to provide a strong national defense.  And remember those “religious” nuts in the C-Street House… that clandestine group of congressmen, senators and other power players, who believe that they are in a position of power because of God’s will and therefore whatever they choose to do, no matter how selfish, immoral or depraved, that’s also God’s will.  How’s that for circular logic?

(That was not a joke.  Look up the C-Street House sometime.  Or just read what I wrote about them in 2009.  It’ll scare the shit out of you.)

4. Rejection of Creationism.  Like I said, the Pope is a scientist, with a degree in Chemistry.  He knows the earth isn’t 6000 years old and wasn’t created in 6 days.  And he also said that fact doesn’t necessarily mean there wasn’t a divine hand involved.  It just means that you can’t necessarily take a 2000-year-old book of stories literally.

The Huckabees and Jindals of the world don’t like this.  To accept a non-creationist stance would be to turn their backs on the thousands of muttonheads who think the Flintstones was a documentary.  Or rather, the dollars they can raise and votes they can receive from said muttonheads.

Pissing off these rubes is bad for business, and by that, I mean the business of getting elected.

5. Making it easier and cheaper to get a marriage annulled.  Funny, I’m not hearing too much clamor about this one, especially not from the ones who have been married and divorced a number of times.

The Republicans should be in step with this one because the Pope is doing what they do… he’s trying to increase his market share.  He’s reaching out to divorcing people as so not to lose them.  Kinda like how the GOP is reaching out to women, African-Americans and Hispan… no wait, they’re not doing that at all, are they?
***
I’ve never made it a secret… you can call me the Poster Boy for Recovering Catholics.  I agree with practically nothing in Church doctrine.  But I have to like this Pope Francis.  He’s not exactly undoing everything, but he’s trying to drag the Church out of the Dark Ages, at least a little bit.  Who knows, maybe a pass on birth control will be next.

After all, like the Pope recently said, “Who am I to judge?”
Posted by bluzdude at 8:38 PM