We See Who You Are

I recall seeing an adage somewhere that said, “When someone shows you who they are, believe them.”

That’s what I have in mind when I see the Republican Party apparatus promoting and defending Roy Moore.

That Moore is a sham religious con man is a given. Apparently, everyone in Alabama knew it too, at least in the local malls. When so many people come out of the blue to tell a similar story, (with some offering evidence), none of whom have anything to gain from it, you have to figure that something is there. It’s not even novel anymore when some anti-gay crusader gets caught having gay sex, or morality-pushing judges or senators get caught nose-deep in extra-marital affairs. It’s almost trite.

And now, given the choice between jumping through hoops to support a pedophile or embodying the values they loudly and publicly promote, these are some hoop-jumping bastards.

The only thing that matters to the GOP leaders, no matter who they have to get into bed with, is the accumulation and maintenance of political power. That’s what they’re showing us right now and we’d best believe it.

Even without the salacious scandal, Roy Moore has shown us who he is. This is a guy who has directly and indirectly espoused racism, sexism, disregard for the Constitution and established law. 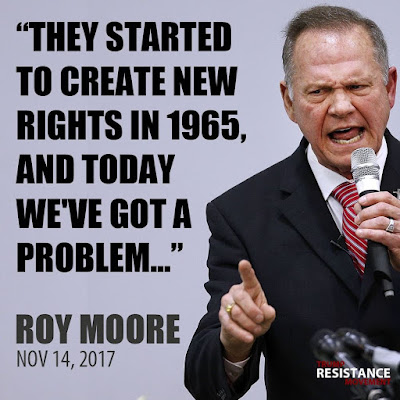 You know what he’s talking about, don’t you? The Civil Rights Act of 1964 and Voting Rights Act of 1965. And is there any non-racist basis that this pair of legislative acts is problematic? (And I mean a reason that outweighs the disenfranchisement of tens of millions of US citizens, rather than nebulous perceived indignities felt by those who were no longer allowed to suppress the rights of others for their own gain.) 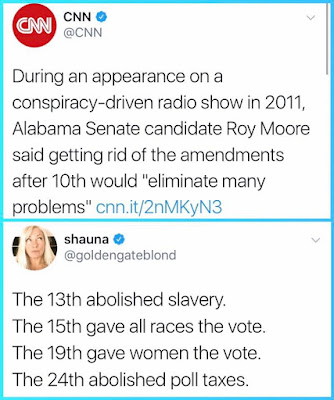 Moore said, "You know people don't understand how some of these amendments have completely tried to wreck the form of government that our forefathers intended."

And there it is; the paean to Constitutional originalism. Keep in mind that this is conservatism 101… the idea that the Constitution is a static document, to be applied exactly as it was written, much like religious fundamentalists look at the bible. This view allows no room for the advancement of knowledge, philosophy, and science that occurred in the subsequent 240-odd years.

Further, keep in mind that in that original document, a black man counted as 3/5 or a person. And if you were to listen to what they say behind closed doors, that’s what the Republicans would like as well. They tell us that every time they push efforts to combat “voter fraud.”

Next, look at the rights of women. The 19th amendment was needed to give women the right to vote, long after it was given to black men. This is also something Moore obviously would like to see repealed.

And looking at the efforts conservatives have made to dominate and control women and their reproduction decisions, this appears to be a GOP platform item as well. They seek to substitute their own judgment for that of pregnant women by erecting barrier after barrier to not only abortion but basic birth control. They fight insurance that could be used to pay for it, they fight to cut food and medical aid to children, and they shrink from anything to equalize pay rates between men and women.  The only logical conclusion is that they too are in favor of the domestication of women.

The only area the Republicans see for the Constitution to grow and adapt is in making this country a Christian theocracy. See, they have to deal with one unavoidable obstacle: 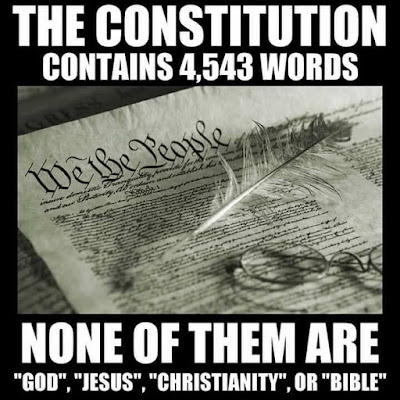 It’s funny how they don’t see adding official religion to the country’s foundation as an attack on the Constitution. As Roy Moore often says, “God’s will supersedes the laws of man,” which is scary as shit, coming from a (former) judge.

The Republicans are showing us who they are, right now. And when I say that, I’m mostly talking about GOP political leadership. We’ll know more about how the “rank and file” think later this week when the Alabama Senate election is conducted.

Republicans know they need that seat and they’ve said as much. Trump is campaigning outwardly to this end and has taken to smearing Moore’s opponent, calling him, of all things, “soft on crime.” 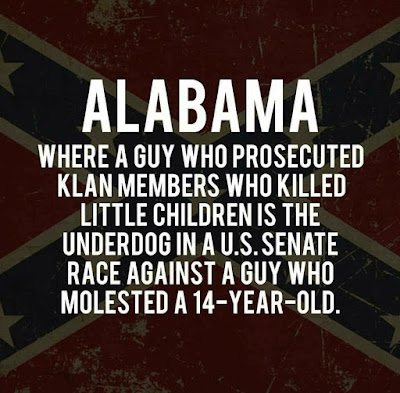 Money is pouring in from the donor base, who also know how important it is to their interests that the Senate they’ve bought remains in their possession. Do you think the Koch Brothers care if the junior senator from Alabama liked to bone high school girls? Hell no. They only care about getting their taxes cut and reducing any monetary or environmental roadblock to greater profits. There is no human cost as far as the Kochs are concerned; we are a commodity to buy, sell and use for their own benefit, just like every other natural resource on the planet.

To address the deficit their new tax bill will create, the Republicans will be coming after Social Security, Medicare and Medicaid next year. That’s not a secret either. And they’re doing that because that’s what the Koch Brothers and other barons of industry want.

The Republicans are showing us who they are… Callous, conscienceless, greedy, misogynist, racist, anti-scientific, evolution-denying, hypocritical motherfuckers. They don’t even hide it anymore.

We need to accept what they’re telling us and act to fight them.

Or else “us” and “them” will be one and the same… Ignorant. Except “Them” will be loaded and living large, and “Us,” will be broke and scrambling.

We can start by consigning the Judge Creeper to the dustbin of history.
Posted by bluzdude at 5:45 PM