Excuse Me, Pardon Me

A lot of people are talking about the Pardonpalooza going on right now with the Current Occupant and his demon spawn (and other assorted hangers-on). I see lots of serious analysis about what’s legal or Constitutional and what’s not. But I think there’s a major point that I don’t see being addressed.

Why would Republicans not make a stand over this and tell their deposed leader that they cannot set a precedent that a president can pardon himself right before a Democrat assumes the presidency?

Think about it. If Trump is allowed to pardon himself, that means every future president is free to commit whatever malfeasance he wishes and then give himself a pardon on the way out the door.

Maybe they’re counting on Biden’s basic decency, (I don’t think Biden would ever stoop that low), but what about whoever comes next? This is especially tricky considering the kind of pardon Trump is talking about… a general, non-specific pardon to cover whatever it is that comes to light. Eventually, someone else will come along who has as little honor or decency as Trump has, and look at the presidency as his crowning achievement in profiteering. Yes, I know, if it’s another Republican, that’s no problem for the McConnells of the world. But what if it’s one of “the enemy?”

I know, we’ll just tell them that we might run Hillary again!

A self-pardoning president is the first step in establishing a dictatorship. Granted, he’d have to steer clear of committing the kinds of crimes a state could prosecute, but that still leaves a lot of room for mischief. (And a lot of room for grifting, especially if one happens to get away with owning hotels and golf courses while serving as president.)

Regardless of what the Supreme Court thinks about the constitutionality of a self-pardon, it’s something that this nation just can’t have. I hope the calmer heads prevail if this should ever reach the SCOTUS, but I’m not sure there are enough of them left.

And now, let’s engage in a little Decembunkery… 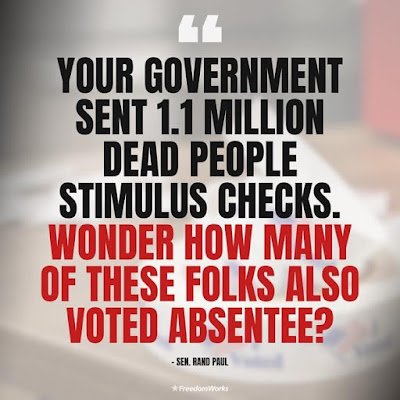 This one is especially irritating because it comes from a US Senator, who should (and probably does) know better. What does he know? That the system for sending the stimulus checks and the system for running elections are entirely different.

The IRS handled the distribution of stimulus checks, (to be specific, the IRS led by the Trump Administration,) so I can see where they’d take shortcuts just to rush the checks out so Fearless Leader could bask in the good PR.

But election registrations are run on entirely different systems managed by individual states, which is an entirely different group of people. So there is no crossover of data. All we have here is another baseless accusation of election fraud with zero supporting evidence. Just like they present in court.

Also, consider that even if some dead people remain registered, how are they going to vote? There is still voter verification going on. Someone would have to either show up or mail back the specific ballot belonging to the deceased. Then you have to multiply that process by the number of people it would take to change an election result? The entire accusation is ludicrous. It’s just not an efficient or realistic way to rig an election. (Unlike gerrymandering, dumping hundreds of thousands off the voter rolls, or requiring specific IDs that you then make harder and more expensive to obtain.)

This is just a smear designed to appeal to those without critical thinking skills, who very much want to believe it.

And now, let’s hear from those very brave and rugged individualists who would rather infect their family, friends, and neighbors with a deadly disease than be told what to do by some pencil-neck doctor. 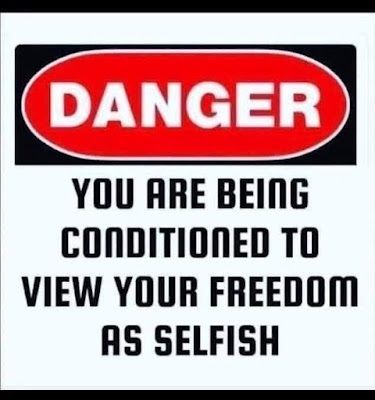 I’ve got an idea for another sign that should go on the front door of everyone who agrees with the one above:

Occupant couldn’t care less if you live or die.

He’s too busy rolling around in his freedom.

(Ammo deliveries around back.)

This is 100% about selfishness. A pandemic requires a degree of sacrifice from all residents. But many don’t have the decency to give a shit about anyone else because they won’t be told to wear a mask or how many packages of TP they can buy, or which direction to walk in a store.

They may feel like William Wallace, but they’re more like a scared little boy acting out so no one catches on. They’re the poster children for “compensation.”

What if they just looked at it as having the freedom to help end a national disaster by being slightly uncomfortable for a little while? It’s not like they’re being asked to go fight a war in the Pacific.

It’s the people who fuss about wearing masks that condemned the rest of us to wear them for the foreseeable future. I just hope they’re rugged enough to pass on the hospital care when the Rona eventually catches up with them. Just go out in the back yard and die like a man. 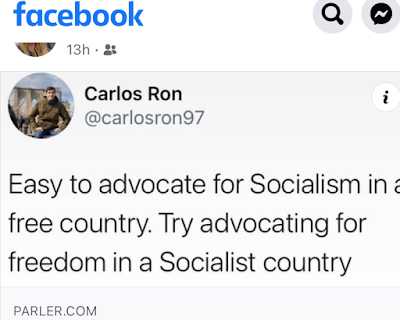 Actually, it would be quite simple. Canada, Denmark, Sweden, the other Scandinavian countries, all with socialist systems, and all quite comfortable with free speech. Of course, no one advocates for freedom there because they’re too busy enjoying life. Aren’t these the countries always ranked so high in citizen happiness?

The anti-social Anti-Socialists always like to bring up scary places like Cuba or Venezuela when trying to pursuade people that certain socialist ideas that would help the vast majority of America are actually a bad idea. And that for some unexplained reason, it’s much better to toil our lives away for basic necessities so that the wealthiest 1% can afford more yachts.

The truth is, we already have “socialist” programs in The United States. 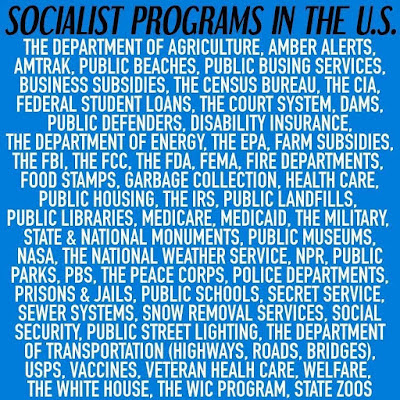 The funny thing is that if any of these were proposed today, Conservatives would still put up a fight. Hell, they’re already trying to get rid of Social Security and the post office. I’m sure the only reason these things came to be is that there was no internet when they were first proposed. The rich didn’t have enough tools to persuade the masses to vote against their own interest.