We live in an alarming time, a time where it doesn’t seem like our country will ever go back to business as usual. The ‘Rona aside, we’ve got about half the country living in a partisan fog, unable to tell real things from fake. The politicians they elect, backed by the only media they listen to, continue blowing the fog into their faces, telling them things they desperately want to believe, that THEY are the “real Americans” and everyone else is an enemy of the state.

And I’m sure that if a Republican were to read that statement, he would assume I was talking about the Democrats.

The lengths that Republicans, elected and otherwise, have gone to overturn righteously-cast votes of other American citizens in the last few weeks, is appalling. Despite each debunking, they cling to the idea that this election was somehow stolen from them. And then when the lack of evidence becomes choking, they just start making stuff up, claiming it just had to be there because there’s no other way Biden could have won.

It’s kind of the same way so many believe that a God created man and earth out of nothing, just like they appear today. No volumes of evolutionary evidence can sway what they “know.”

They seem to ascribe to the Bigger Cheater Theory, which says, “Given how hard they cheated to win, (gerrymandering, limited voting places, and equipment, rigid ID requirements, sabotage of the post office to cripple the delivery of ballots both to and fro), the only way Democrats could have won is by cheating even bigger. And it was cheating so clever, it didn’t leave a single trace of evidence!”

Virtually every lawsuit brought to bear was laughed out of court. Even the Supreme one, where Trump was sure he had bought enough votes there to approve anything he needed.

The logic came down to, “We think they cheated because some people told us they did, but we can’t prove or validate any of it. We also don’t like how they held their election, although it was consistent with their state laws. So we want you to invalidate millions and millions of votes so we can try it again. Better yet, just hand us the presidency.”

And when a case finally went to the Supreme Court, over a hundred Republican Congressmen signed on with their approval of this logic. Despite having just won their own seats in that same election, the Trump part was somehow rigged, so all those votes should be discounted so Trump can win.

These people showed us that to them, our votes mean nothing. And that’s the new Republican paradigm… “Hang the voting, we’ll just pull strings behind the scenes to get what we want, which is to stay in power regardless of the will of The People.”

Just like Madison and Jefferson drew it up, huh?

All these people who comport themselves as such supreme patriots, these red, white, and blue Super Citizens, are willing to flush the Constitution down the toilet as soon as it becomes expedient. Such true-blue Americans! Paragons of justice!

These governors, attorneys general, representatives, and senators need to be remembered by the rest of us as the seditious shit-weasels they are and treated as such for as long as they cling to power or public life. They literally approved the nullification of an election whose results were as overwhelming as they were clear, solely because they didn’t like the result. Nothing else is relevant or applicable.

Even after the SCOTUS ruling, there’s still another avenue of pursuit, which is for Congress to disregard the voters’ decision when appointing and approving electors. And that really comes down to the same logic described above, just overturning the vote because they don’t like it.

The kindest explanation is that they’re terrified of the outgoing president and they don’t have the backbone to defy him and defend the Constitution, or the values this country is supposed to represent. They want to appease this troll so that one day he will smile upon them, thus directing his fan base to accept him as one of his loyal toadies, fund his campaign and attend his rallies.

All it costs is the soul of this country.

One day there will be history books about this time, which will either examine it as a black hole in our nation’s record or praised as the start of a new authoritarian government, where We the People have become nothing more than modern-day serfs, toiling in the fields for the benefit of our Masters.

“But we want a say in government!”

“Shut up and get back on the plow!”

“We’re crying out for justice!”

“I’ll give you something to cry about…”

“Come see the violence inherent in the system!” 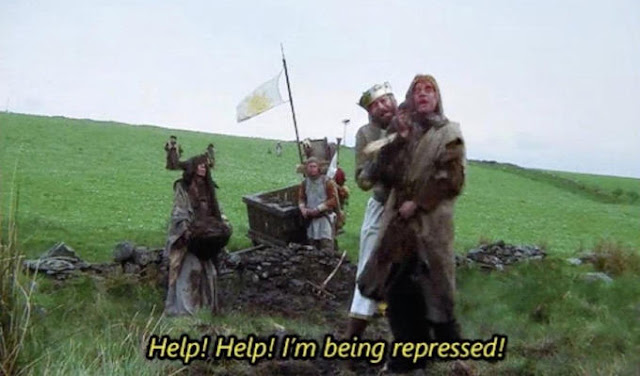 I am sure there is fraud. 70+ million Americans couldn't possibly be stupid enough to vote for the Mango Mussolini!

I agree so many things that have happened will end up in the Almanac and history books. It sure would be interesting to see for sure. Hugs and Happy Friyay! RO