Fox “News” is predictably up in arms over President Biden’s advance declaration that he intends to nominate a Black woman to the Supreme Court. “Reverse Discrimination!” they cry, which is the only discrimination they ever acknowledge. Oh, those poor oppressed White men, who have landed all but seven Supreme Courts seats throughout the country’s history. Such an oppressed segment of the population, no?

Naturally, people like Sean Hannity are complaining that proclaiming a race/gender qualification ahead of time is a big deal, much like everything else Democrats do. The revered St. Ronald of Hollywood stated in advance that he was going to place a woman on the Court, and followed through with Justice Sandra O’Connor. No one said diddly about that, then or now. The Former Guy also spoke of putting another woman on the SCOTUS bench. Again, no one said boo.

I’m starting to think the issue here is the Black part and not so much the Woman part. Just a hunch.

Sen. Susan Collins waded into the mess too, calling out a “clumsy handling” of the nomination process. Gee, thanks for weighing in there, Senator. And tell me, how graceful were the last few nominations? Like nominating a drunken frat boy with a rapist past, or stonewalling one nomination for 10 months while hustling the next one through in two weeks.

Listen, Susie, the next time I want your opinion, I’ll just ask the Federalist Society. The death of Roe vs Wade will be laid at your feet because you could have stopped it. 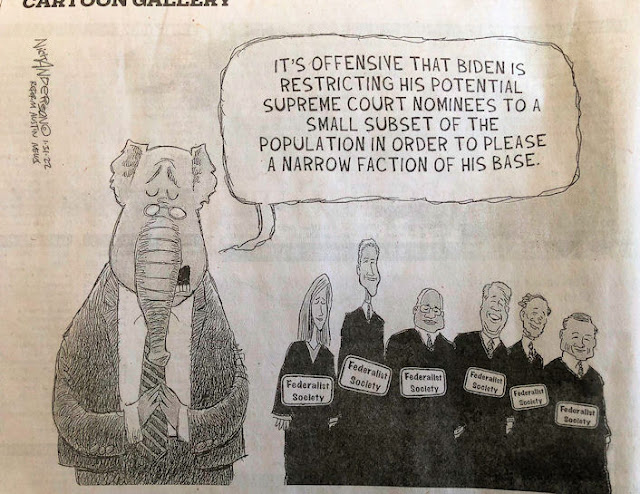 I’m enjoying following the ongoing Spotify controversy, wherein Neil Young and Joni Mitchell both asked to have their work removed from Spotify if they continue to host Joe Rogan’s meathead podcast. They take issue with the deadly misinformation that streams forth from said podcast, which has resulted in the continuation of the COVID pandemic. 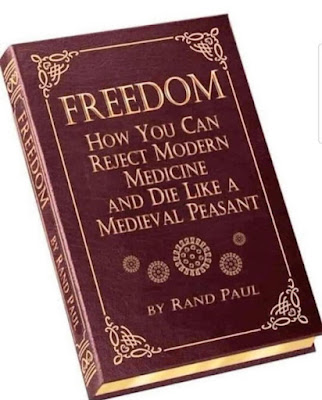 So far, in a move that is not remotely surprising, Spotify has granted their requests. I’m sure they’re doing the math and as soon as the amount of money lost due to principled artists pulling their music tops the income brought in by Rogan’s podcast, THEN they’ll do something about it. But until then, dream on because money talks!

I’m not sure how much of an impact the music from a couple old hippies will have on Spotify. Maybe if additional artists, more current or popular artists join in, they may have to rethink things.

And of course, the protests from the Right about freedom of speech are as misguided as they are short-sighted. The First Amendment protects speech from government interference and does nothing to require that private companies support or not support any given speech. It’s purely a free market issue and the market ultimately answers to the people. I find that Republicans consider the free market the answer to everything, right up until it infringes on something they like. Then it’s a race to claim victimhood and cry “Oppression!”

When looking over the cable TV menu the other day, I came across this surprising viewing option: 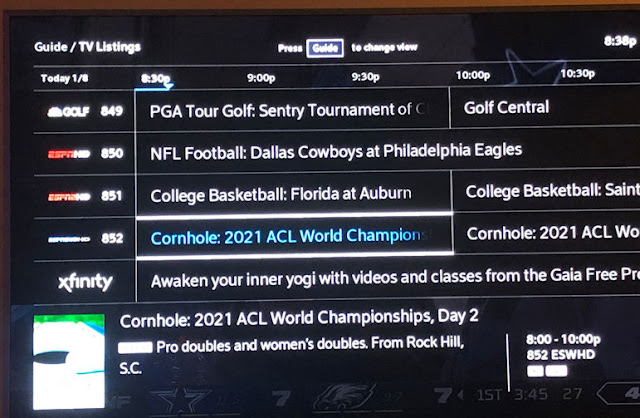 I mean, I have nothing against cornhole. It’s a lot of fun to play. But watching someone else play while I sit on my couch? Please. To me, it’s the same with bowling, billiards, poker, fishing, and golf… fun to do yourself, mind-numbingly dull to watch others play.

I am a bit surprised that they didn’t find a new name for it, given the risqué nature of its original name. If they really want to jazz it up, they should make a few changes… like play with Jarts. At least then you’d have a chance at seeing a serious impaling. Or have a drink requirement, like whichever team loses a round has to drink a shot or chug a beer. Anything to break up the monotony of watching people toss beanbags into holes.

Please, if you ever find me watching people play cornhole on TV, just put me out of my misery right then and there. It would be a mercy killing.

At my dad’s memorial gathering, we invited people to share their stories about him. One such person was Dad’s oldest friend Sam. They knew each other since first grade, having lived across the street from each other. Sam was as Irish as Dad was Italian. Both went to the local Catholic school. This was one of Sam’s stories:

“One time Jimmy and I decided we were going to go to one of the dances in (a predominantly Jewish suburb of Pittsburgh), and see if we could pick up some nice Jewish girls. Unfortunately, they seemed completely uninterested in these two Irish and Italian boys. So we decided we’d change our names so they couldn’t tell. The next time we went back, I became “Sammy Greenbaum” and he was “Jimmy Diamond.”

But even with our new names, we still struck out completely.

As we headed home, I asked Jimmy, “Do you think maybe we should have taken off our St. Christopher medals?”

I just laughed out loud in my quiet office. Your dad was a damn hoot!
I read the complete comment from Neil Young stating that he believes this dude has the right to free speech but he has the right to not be aliened with someone harming the people. It was excellent but has been removed. I also read that once advertisers were involved with jumping ship is when Rogan made that half asses comment. It was not an apology. I think spotify made him make a statement. I also read that Paul McCarthey, and Bruce did the same and left. Young people are saying who cares. But I also read in the NY Times that these "classics" are where the money is believe it or not is.(https://www.sportbible.com/mma/joe-rogan-has-lost-spotify-a-staggering-2-billion-in-market-value-20220130)
Can't imagine but I hope that's true. I do not listen to Spotify and won't. When Rogan said a healthy young person of 21 who exercises and eats right won't get covid and die so there is no point in being vaccinated he should have been removed immediately. I hope this isn't over. But he is in a 100million dollar deal with them so who knows.

People shouldn't be taking medical advice from comedians and game show hosts in the first place. People taking his advice, getting COVID, and dying are bettering the gene pool.

I don't really have a dog in the Spotify fight... I listen to music that I've procured the old-fashioned way... buying hard copies and listening to those or tracks I ripped onto the PC. It would be nice if they took a stand on principle, but we have to remember that the only principle they really care about is raking in the dough. They won't change until it hurts their earnings statement.

Your Dad was wickedly funny and I enjoy the Dad Stories. Boring shit on TV that is popular, I just don't 'get', mind numbingly boring is right, but then, I see General Public and don't really know if some of the intellectually challenged could 'get' anything deeper than those boring Shows? Of coarse, I never saw the attraction to Soap Operas and some of those are still running that were popular with Housewives in my Childhood! We get a lot of Hispanic TV Channels here and some of the Comedy is very infantile, I asked a Mexican National Friend of mine why the Characters were so ridiculous and the Shows seemed like a Child's Show, when clearly it wasn't? She told me that in Mexico a lot of people are not well Educated and to the Uneducated, the Humor is geared more to what you'd expect much Younger Audience to enjoy. That was an interesting explanation. It also made me realize perhaps that was the Appeal of IQ45 to his Base? *Bwahaha, couldn't resist*

Yeah, that could explain a lot about why Mexican soap operas are so over the top.

There was a very brief time that I watched a soap opera. It was summer and I was home from college and under-employed, so I had a lot of time on my hands. One day I went through the living room and my sister and her friends from the neighborhood, (all 3-5 years younger than me) were glued to The Guiding Light.
Being bored off my rocker, I sat down with them and was soon going, "Who is she? Why is she being so mean? What's that guy's deal?"

Next thing you know, every day at 3:00, there I was sitting around with a bunch of middle-school girls watching this ridiculous soap. I totally got caught up in it to the point we were talking about these characters like they were neighbors, and celebrating when a manipulative character got his comeuppance.

But once school was back in session, that was that and I went back to my non-soap-watching former self.

OK, other than the one year I watched professional wrestling, which is like a soap opera for meat-heads.