Every couple of years, the Pittsburgh Pirates play a couple of games here in Baltimore, against the Orioles.  These are my two favorite teams so I always go see a couple of games from the series.  (This year they play two here, a Tuesday and Wednesday, and then two in the Burgh, in September.)

While you see me reference the Orioles more frequently, due to my proximity to Camden Yards, I still consider the Buccos my favorite team.  The black and gold runs deep.  And given that I have three different Pirates game jerseys and precious little chance to wear them, I had to take advantage of the opportunity.

I went to the Tuesday game by myself, although I met Sitcom Kelly and her Sitcom Mother and Sister, for pre-game beers.  But they were sitting under the deck to the right of home.  I had a seat 14 rows behind the Pirates’ dugout. 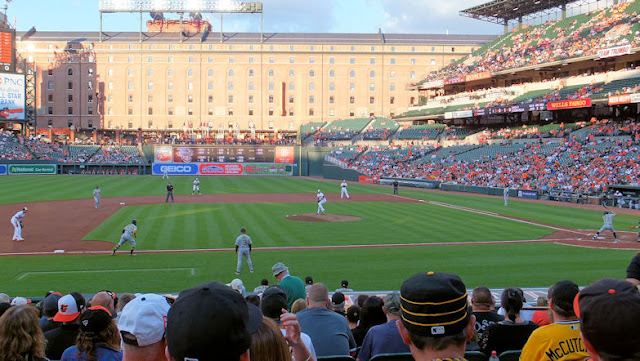 The view from Section 52.

As such, there were a good many Pirates fans around me.  I ended up talking to one guy from Pittsburgh who was there with his family.

Pirates first baseman John Jaso tossed the kid a ball when coming off the field. 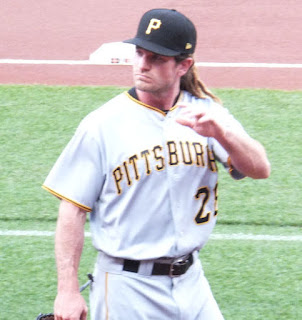 I could have had a shot at it but Dad had me boxed out.  (Don’t judge… the kid will probably lose it down a sewer somewhere.)

So about halfway through the game, the Dad gets a message that we were both just on TV, on the Pittsburgh local broadcast.  I thought that might happen.  The local production likes to find their fans with the team on the road, and I was sitting in a cluster of them.

Then whoever was watching the TV feed took a screen shot and sent it.  I had him text it to me, and voila.  Here I am on TV again… 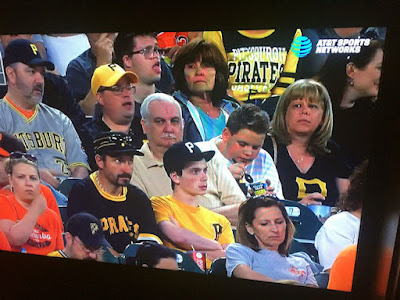 While I am talking to the Man in the Yellow Hat, that does not give you license to call me Curious George.

Pirates took a 2 run lead into the 9th, but the O’s tied it on Jonathan Schoop’s 2nd HR of the night…

I couldn’t complain; it was a heck of a game.

The next night, Sweetpea came with me.  We had seats in the club level, looking down the first baseline. 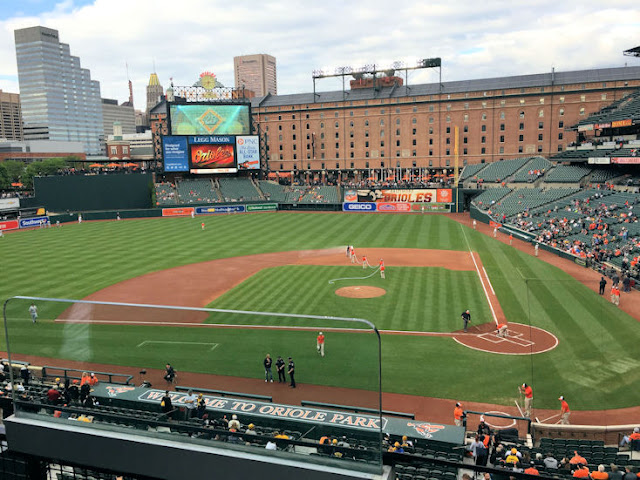 We chilled there for a couple of innings before going back to forage for food.  As we walked around, we ran right into my brother and his friends, talking to my brother-in-law from Cincinnati and his friends.  I knew they were both going to be there, but I was waiting for my brother to give me the high sign to join him in his company suite and figured I’d triangulate w/ the BIL at that point.  So they beat me to it.  We hung out and chilled there for a while and then watched the end of the game from the suite. 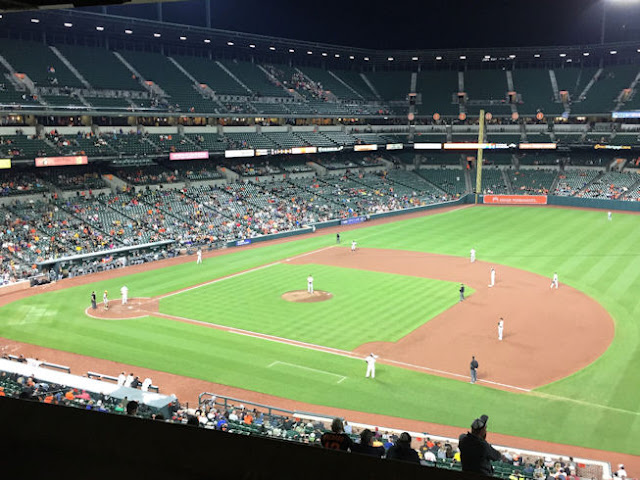 Sweet view from the Suite.  And it looks even better with a couple of crab cakes on your plate.

This time, the Pirates gave up a 4-run lead in the bottom of the 9th.  The O’s tied it on a homer by rookie, (and Sweetpea’s favorite player) Trey Mancini, and won it in the 11th on another Mancini HR.

While the endings didn’t go my way, both games were wildly entertaining.  No complaints from me.  Now I’m back to “Let’s Go O’s!”

Dimming the Bat Signal
It was with a great nostalgic sadness that I learned of the passing of Adam West, TV’s venerable Batman, from the campy 60s series.

I say it’s campy now, but at the time, when I was in early grade school, that shit was deadly serious.  Every afternoon, my brother and I would race home to see who the big villain was this week, or how Batman and Robin were going to get out of diabolical deathtrap in which they were ensnared.  When the show was over, we’d run outside to relive the episode, sometimes with our “official” bat capes and masks, sometimes with a dish towel tucked into our collars. 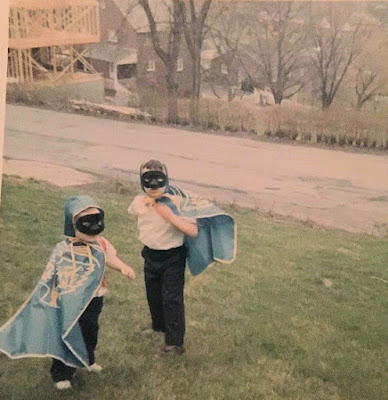 It wasn’t until I watched some of the episodes again, as an adult, that I saw how genuinely funny it was.  There was so much stuff I missed.

For example, in one episode, the police were questioning a bad buy in an empty room, save for one giant un-shaded light over the crook’s head.  On the wall, there was a sign by the switch: “SUBTLE INTERROGATION LIGHT.”

I’m happy that Mr. West made peace with his caped alter-ego, and was a regular at comic conventions and the like.  I’m sure he knew that his continuing safety was paramount to a legion of dish-toweled little kids like me. 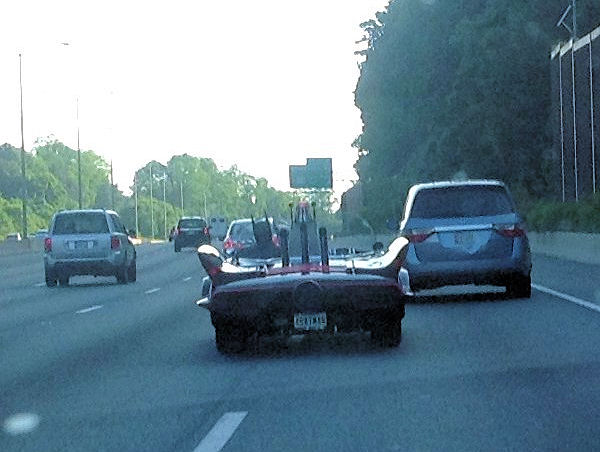 Goodbye, Batman.  A grateful nation thanks you!

The Pen-Ultimate Series
So, what was it that happened last night?  Oh yeah, the Pittsburgh Penguins won the mudda fuckin’ Stanley Cup for the 5th time!  Holy crap!

But I have to start the story from last Thursday night.

I’d been having some trouble with my TV lately.  When I was watching Game 4 of the finals, all of a sudden the picture started freezing with a kind of strobe effect.  It made the screen appear like it was bleached out.  There was no depth or richness to the color.  It was annoying but I eventually “fixed” it by turning it off and on a few times.  That worked for the rest of the game and it stayed fixed throughout the week, and even during the day on Thursday, when I had the Comey hearing on.

(I was going to write some stuff about that, but what more is there to say at this point?  The Republicans just want to pretend President 45 was vindicated, claim vindication and move on.  So what else is new?)

Anyway, when I put the game on Thursday night, the problem returned, and turning the TV off and on didn’t do anything this time.  I was forced to watch the game like I was looking through a gauzy linen.  And that was a shame because this was the first game of the series where the Pens looked like themselves, winning 6-0.

Through the process of elimination, I determined that this was a problem with the TV, and not the network or the cable.

I’d been poring over new TV models for the last couple years.  I got my TV, my first flat screen, a 46” Samsung, in 2009, just in time to watch the Pens win their third Cup.  With the way the tech has advanced since then, I've been longing for an upgrade, but you know how it is… I had a perfectly good TV and other things to replace kept arising.  (Washer, dryer, car, bedroom TV…)  I couldn’t justify the expense.

AND, if and when I join forces with Sweetpea, she already has an extremely nice TV.  I was planning on just ditching mine when the time came.

But now, my luck had just run out.  I’d have to replace the TV and there was no way I was going to get one delivered before Sunday.  (Yes, I know I could have just gone and bought one from whatever was in stock, but I A) wanted someone to set up the remote, B) set up the Wi-Fi (because this would be my first “smart TV”), C) take the old TV away.)

I went out to my local Best Buy on Saturday afternoon and made the purchase; a Samsung 7000 series 55” Smart TV.  And as I figured, it can’t be delivered until next week.

As I’ve written before, I’ve been spending my weekends with Sweetpea, but I’ve always come back home on Sunday night, before the start of the work week.  So if I were to watch the game at her place, I could either come home very late or just stay over another night.

Easy call.  I just had to bring clothes for work on Monday and decide on game attire.

For away games, I’ve been wearing my newest white Malkin #71 jersey, but the Penguins lost the last three times.  I felt it was time to do something daring, so I eschewed wearing any jersey and went with an old Pens t-shirt… the one I wore during Game 7 of the 2009 Cup Finals when the Pens won the Stanley Cup vs Detroit. 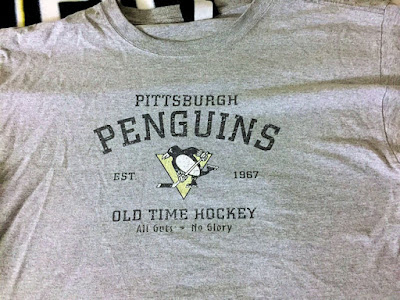 It had a reliable recent history too because I’d also worn it during the Blue Jackets series when watching an away game at Sweetpea’s house, and the Pens won.

So, it worked out, but damn if it wasn’t stressful.  As the score remained 0-0 throughout the 3rd period, I just kept thinking, “Please not overtime, please not overtime…”   Sweetpea had already gone to bed so it was only me there, living and dying on every shot.

Then, as you may know, Patrick Hornqvist knocked in a bank shot off the back of the goalie with a minute and a half left in the game.  I celebrated as loud as I could, without waking up the rest of the house.  Startled the hell out of the dog, though.

And that was all she wrote… the Pens added an empty netter but the result was already locked in.  My Penguins are the first team to repeat as Stanley Cup champions since 1998. 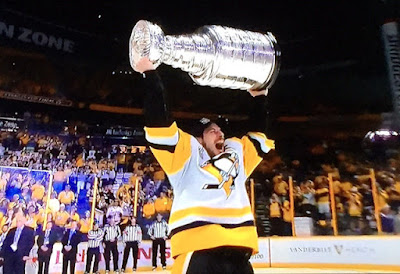 In retrospect, it was good that I was watching the game alone.  Watching the Pens skate the Cup always turns me into a sloppy mess, especially when it’s this guy’s turn. 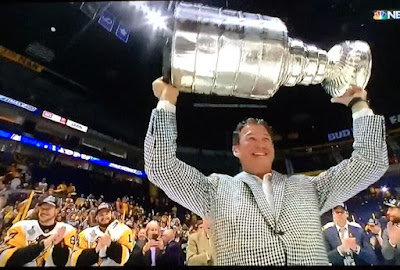 And as my nephew texted me, “Suddenly games in DC just became much easier to go to.” 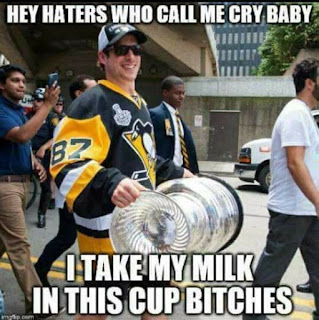 The best is here."simply Le MIEUX"

Wow that was strange. I just wrote an really long comment
but after I clicked submit my comment didn't show up.
Grrrr... well I'm not writing all that over again. Anyhow, just wanted to say fantastic blog!