There are big lifestyle changes afoot in ole Bluztown. Plans are for me to move in with Sweetpea around the middle of next month.

Because we’ve had this planned out months, it’s given me the chance to bring stuff over bit by bit. It’s only a 6-mile move, so my goal is to have just about everything but furniture transported over ahead of time. I make the trip from my place to hers at least twice a week, so I’m trying to make sure I never show up empty-handed.

Last month I made a list of all the stuff I wouldn’t need before moving so I could start getting it boxed up and moved. You know, things like my record collection, VHS tapes I couldn’t part with, winter clothing, picture frames, Christmas decorations, glassware, books, sports tchotchkes (like bobbleheads).

It took me two weeks just to move the record collection. I had them stacked in five old Peaches crates. Once upon a time, I had a bunch of boxes that were perfect for transporting LPs… In fact, that’s what they were shipped to the store in. I kept those boxes for every move I made and only got rid of them (under duress) a few years ago.

The boxes I have now are not a good fit. I have small, medium and large boxes. The large boxes are waaay too big, and more like for bedding and towels and stuff. LPs don’t even fit in the small boxes. And the medium boxes; well, they fit but when filled up with records, weigh a freakin’ ton. I could wrestle 3 of them into my trunk, so that’s all I took at one time. I didn’t want to risk popping a disc by trying to get a box that heavy out of the back seat.

But, we got it done, so my record rack became the first thing of mine to get set up at her house. 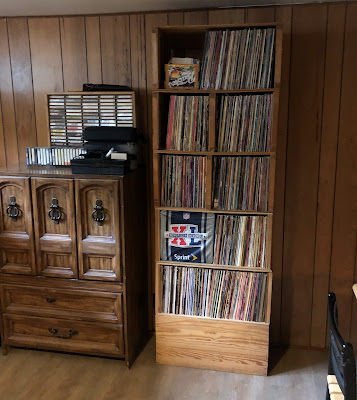 After unloading, I can re-use the boxes!

Now, the odd part about relocating “incrementally” is while I roam about my apartment, I keep seeing the random empty spaces where my stuff used to be. It’s like being in one of those movies where parts of your life are disappearing. Like, this shelf is empty while others are still full. One cabinet is full of dishes; the one right beside it is empty. I pass an empty space on the wall where a picture used to be. It’s weird. 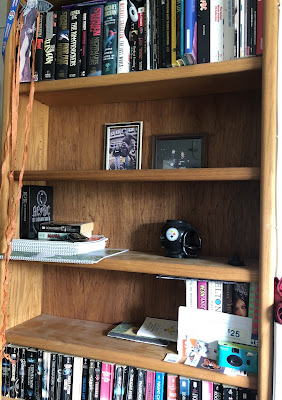 It gives you the willies, man. I had to pack up the books the rest of the junk, just to make it uniform. And believe me, the books were no treat to move either. Between carrying all those boxes of books and records up out of my apartment and then downstairs to Sweetpea’s basement, my knees have been barking at me all weekend. If this pain doesn’t go away soon… I’ll just have to wait a little longer.

I am definitely too old for this shit. I don’t mind packing the boxes; I’d just as soon do that myself. But I am done with moving this heavy-ass furniture. Back in the day, moving meant I’d rent a truck myself and then my friends and I (or whoever else I could rope into it) would move all my crap ourselves. This time, I’m more than happy to pay for three guys and a truck to come hump my furniture from my place to hers. I’ll just supervise.

It’s going to be a big change though, seriously. It’s been at least 20 years since I’ve lived with someone full time. The days of just coming home and enjoying three or four hours of solitude will be gone. Granted, I’ll instead be spending those hours with someone I love. But it will nevertheless be an adjustment.

Same with weekends. Since last January (of 2017) weekends have been like an ongoing series of mini-vacations. I go to her place on Friday night and we hang out until Sunday, going out or watching TV or movies.

But the last couple of weekends have been different. We have a lot to do, just to make room for my official arrival, so we’ve been busy at that. Two weekends ago, we cut the grass and weed-whacked the yard. Last weekend, we cleaned out the gutters and trimmed back the bushes. Both times we were racing to finish before the rainstorms hit.

We were finishing up our chores on Saturday, winding up electrical cord and dripping sweat, when Sweetpea turned to me and says, “Still wanna get married?”

Yes, I was kidding, but as an apartment dweller, I haven’t done any serious yard work (or home repair) since 1996. It’s been a nice break from adulting, I know.

Plus, I already bought the ring, so there are no takebacks. Hmm, I bet it’s no coincidence that she never had me help her in the yard until she got her ring (and the 7-day return period expired). Too late to back out now…

All kidding aside now, it’s an exciting time. I know it won’t be a walk in the park, but it will be good. We’ll be partners.

I always wanted a partner… not someone to decide everything for me, or who I have to carry, but someone to walk with me, side by side, and navigate our way through life… as a team.

Sounds like your carefree bachelor days are coming to an end. Savor them, my friend. I hope you adapt to all this upcoming adulting. I'm pretty sure you will. P.s. Gravity has gotten stronger these past few decades. It's the only explanation for the weight of furniture.

Love will lead the way,you can do it!

Thanks, Jono. Yes, my days of chilling solo on the couch are gone. But on the upside, I'll have a chilling companion!

And yeah, it's funny how gravity does that. Does it also make your clothes shrink after you've had them for years?