As we begin our second real week of lockdown, there’s a lot going on.

Congress is working on a “bailout” bill but, of course, who gets bailed out and by how much is a matter of great debate. Both sides are pushing the happy talk of the $1200 checks that are supposed to come out to all eligible Americans. But naturally, the Republicans are pushing for a giant slush fund of taxpayer dough to be set aside for big business. The scary part is that they set up Steve Mnuchin to be the sole distributor of the funds, gave no conditions for which the money can be used, and also included language assuring non-disclosure for six months regarding who receives the funds.

So, all the Republican Party favorites would be sure to get their big fat slice of the pie, to use however they see fit, and no one would know until it was ancient history (AND the election is over). Judging by the previous bounty of tax dollars they received, we can assume that their non-executive employees will see zero benefits, but there will be stock buybacks and executive bonuses. You know, GOP BAU.

The Democratic senators found their backbones and voted the bill down, risking being blamed for holding up the checks. (Which started immediately, with Mitch McConnell accusing them of fiddling around while the country burns.) The balls on that guy…

This may be a way to reduce the payout to working class Americans. You watch, the GOP will exchange the slush fund for a reduction in direct payments to Americans. Then they can claim they tried to help and blame Democrats for the reduced sum. Their dogma just doesn’t allow for handing out money for nothing. 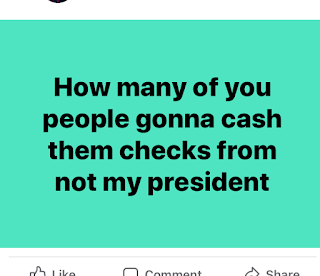 Answer: Just as many as those who took their stock dividends after the Obama Recovery.

Getting back to those checks… I hope there’s a way to use the ACH from past returns to allow for direct deposit. Otherwise, there’s going to be a whole cottage industry of dudes following the mailman around (at a distance) so they can steal the checks as soon as they hit the mailbox. It’s gonna happen. All they have to do is avoid houses with cars in the driveway.

In my case, I get an email every morning with a scan of what mail is coming my way. If I see anything “official-looking,” I’ll be out there in a Haz-Mat suit waiting to greet that mailman personally.

I saw that the Current Occupant* now thinks he’s a “Wartime President.” I swear the first time I saw him say that I thought, “Christ, he’s gonna cancel the elections.” Later I saw a few write-ups on how that’s not legally possible because his term will expire regardless of whether there’s a new guy lined up to take over. But that doesn’t mean he won’t try. After all, he’s got his lackeys on the SCOTUS who will do whatever he says. He’ll figure it’s at least worth a shot. You really can’t see him making the argument that his term should be extended because of a crisis, COVID-19 or whatever else he can drum up?

What they need to do is start working on getting the November elections ready to be 100% mail-in. Not that the Republicans will go along… the more election chaos, long lines, reporting problems, the better for them. Low turnout is the easiest way for them to win. You KNOW the rich districts will have enough voting machines.

I saw on our friend Infidel753’s blog that among the current drugs that are being tested for efficacy against the COVID, is the blood pressure medication, Losartan. It would be quite a stroke of good luck it that’s the one the turns out to be effective. I take that right now and it’s one of the cheapest drugs out there. My 90-day supply (at one pill a day) costs me around $5.00.

Now, the question is, by how much are they going to jack up the price if this comes to pass? And they don’t even have to raise it up to Insulin prices… they could just charge $10 and it would still be considered cheap and they double their profit margin. Of course, that would require a degree of restraint and you know how restrained Big Pharma is. The only thing longer than their history of price gouging is the length of the disclaimer on their TV ads.

I understand the 2020 Census is taking a hit from the virus. No home visits for the time being so they have to use other means. I hope they’re not waiting for help from this administration. Republicans will be thoroughly delighted by a massive undercount of citizens, especially non-homeowners. That’s their best-case scenario. They will not cooperate with any efforts to count up all the likely votes against them.

Here in Chateau Bluz, we’re under informal house quarantine. I’ve been working from home since 3/12 and Sweetpea’s school (where she teaches grade school) has been closed since 3/16. As much as it pains me to say, our Republican Governor, Larry Hogan has been doing a good job of handling the pandemic.

While he’s still a Republican and all about propping up business, he’s neither a religious zealot, gay basher, nor a Trump toady. He’s been taking this thing seriously since early in the year and is not pulling any punches, unlike another prominent Republican leader. 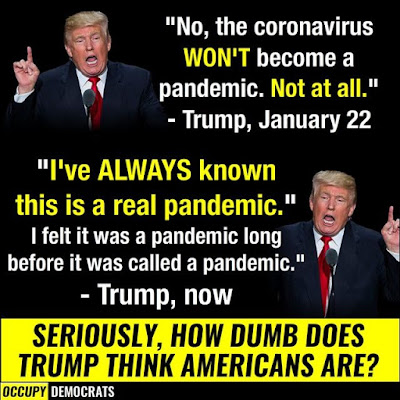 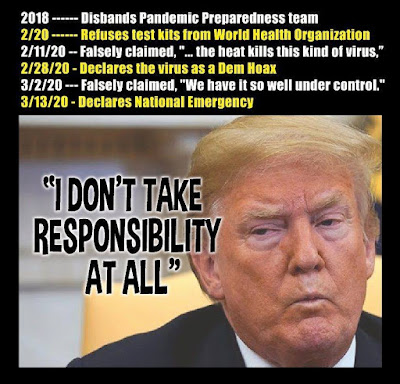 Today he just closed all non-essential businesses and while he’s not ordering an official state of quarantine, he’s recommending we act like there is one. I may criticize him on other things, but not on this. He’s doing a good job.

The big question is what they’re going to do about the schools. They started with a 2-week closure that is scheduled to end this Friday. While I think there’s a zero percent chance of school starting again on Monday, they haven’t announced anything further. I understand this is a tricky situation. If students can’t go back, what do you do with them? Pass them on after only a little over a half year’s instruction? Hold them back? Combination of the two? Start school early next year? And more importantly, do the teachers still get paid?

It’s funny what they characterize as “essential” services. For example, liquor stores are remaining open. Maybe that’s to allow room to close all the bars. Or maybe it’s because he realizes that people need to have something to do when they’re cooped up at home all week.

I’ve been trying to get myself out the door to go get a haircut for the last month but never broke the household inertia. Now it looks like Sweetpea is going to have to do the honors. I guess if you’re going to submit to an amateur haircut, doing it during a quarantine is the best possible option. There will be plenty of time for it to grow back before anyone else has to look at it.

While we’re not out there panic-buying, we have been going to the store regularly, just to pick up whatever is available. The grocery stores in our area have been carving out a special time for the elderly to shop, between 6:00 and 7:00 AM. The only problem is that the geezens are buying everything up.

Sweetpea went out this morning to find a whole lot of nothing. The cashier said they were trying to enforce quantity limits but the old people were pitching a fit about it while trying to buy 6 packages of hamburger meat.

I told her that next time I’ll go during the old folks’ hour and I’ll dress the part. I’ll mess up my hair, wear socks and sandals, hike up my pants, wear my eye-doctor sunglasses under my regular multi-focal lenses and throw a bag of Werther’s in the cart first thing. I’ll fit right in. 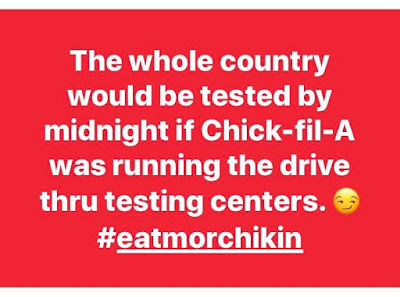 Yeah, but no LGBT, Jews, Muslims or atheists would be allowed to get the test.