We’re going to jump around a little bit with this post. I do this when I don’t have a big cohesive topic to ruminate on, merely a bunch of semi-coherent notions.

I’ve said for years that the top Republicans don’t really care about abortion, they just love to use it as a wedge issue; something to get their voters worked up about. It’s been a great issue for them because they’ve had Roe established for so long, that there was never any danger of having to face any serious backlash.

And the most important thing was that fighting the abortion wars didn’t cost Big Business any money. Overturn? Don’t overturn? Doesn’t matter a bit to the Koch Brother and the energy industry. Or Wall Street, Big Pharma, Big Farma, Big Tech, etc. Just as long as it could continue to be used to drive the evangelicals to vote Republican, they could count on passing tax cuts and cutting safety regulations.

But along the way, some True Believers have made it to the top levels of government. To them, the Mike Pences of the world, abortion is a moral issue they take personally, as in making it their personal business to force you to adhere to their morals in lieu of your own. And now, we have a fistful of SCOTUS members who can’t wait to make the rest of us dance to their church music.

So it will be interesting this fall to see if Republicans will be forced to pay a price for installing religious ideologues into the land's highest court. If they don’t, it’s the end of our secular world as we know it, because they’ll be coming for birth control and gay marriage next. The precedent will have been set that there are no more precedents, especially those the religious folk doesn’t like.

I saw this headline last week:

That’s the problem with having a “useful idiot,” that no matter how useful he is, he’s still an idiot. I wonder if Putin made TFG sit on his lap as he explained world history and geopolitics to him. That would have merely been the visual representation of what had been going on all along… a ventriloquist act.

I saw a poll a while back that asked, “Is the country going in the right direction?”

I never know how to answer that question unless I know who’s conducting the poll because they can interpret the answer in whichever way suits their needs.

I say the country is going in the wrong direction. A conservative outlet could consider it evidence that Biden is doing a bad job. A progressive outlet could make the case that the public is against the GOP roadblocks to everything the Dems try to do because the Republicans and Sinimanchin put the kibosh on it. (Which would be the reasoning behind my answer.)

It looks like “baby formula” is the new “gas prices.” One of the 3 major providers of baby formula in the US had to recall their goods and shut down production due to contaminated products that killed or sickened some babies. These are post-birth babies, so the Republicans don’t really care about them, but it still makes for a good smear. Just look at how many GOP congressmen voted against removing the Trump-era tariffs on Canadian formula, to help resupply our stores. But Fox “News”  and conservative media are beating this new drum trying to put the blame on the Biden Administration as if Joe had his minions out creeping about the factory dropping E-Coli into the vats. You know, because anything bad that happens when there’s a Democrat in charge is the Democrat’s fault. And if there’s a Republican in charge, it’s also the Democrat’s fault.

And how do they get away with doing that? 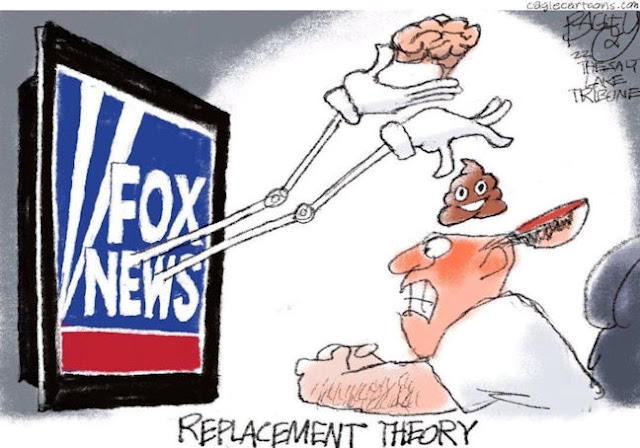 Watch out, the ‘Rona is on the way back. Even in highly-vaccinated Maryland, the stats have made a big U-turn. 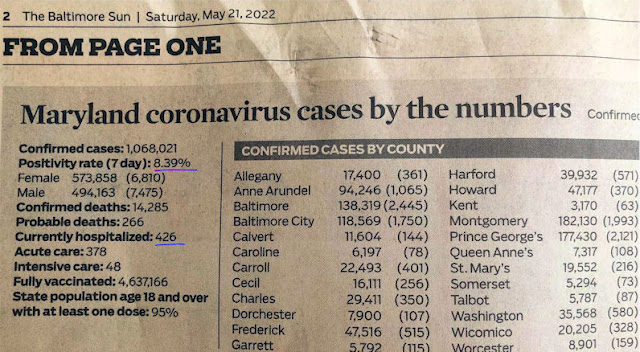 This clip was from Saturday’s Baltimore Sun. Only a month or two ago, the positivity rate was around 1.5%. The number of patients hospitalized with COVID was under 150. But since all the rules have been shelved and people rushed back to acting like they did in 2018, the ‘Rona has waltzed right back into our midst.

I still need to get my second booster. I’ve been waiting for two reasons: 1) I’m hoping they come out with an Omicron-specific booster and 2) I’d like the coverage to go further into this fall and winter’s germy season. Although I have a plane trip coming up in a couple weeks so I probably ought to get that booster right now. I plan to wear a mask but I doubt there will be many more doing so at the airport and on the plane.

On the Home Front

We have a big sea-grass bush outside the house that needs regular attention. This is its usual state: 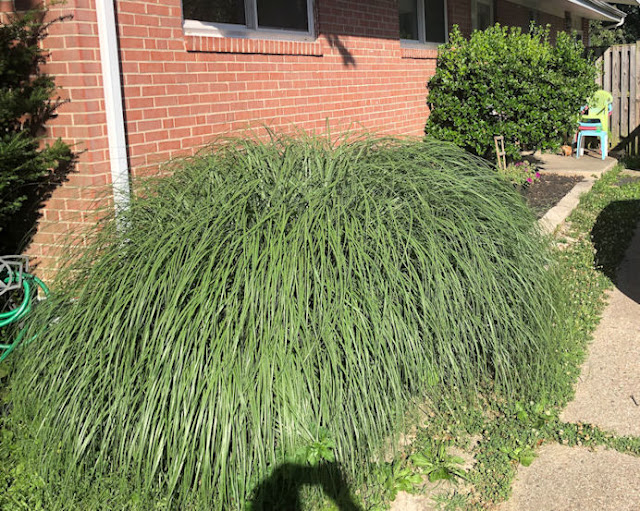 This is a shot from mid-summer a few years back. Normally we clip it down in the fall because if we don’t, all those leaves turn brown and it looks like Cousin Itt on a bad hair day. But we never got around to it last year.

So with all the alternating rain and sun we’ve been getting, Cousin Itt was completely out of control. All the brown-bladed leaves were still there, but a lot of fresh green ones popped up as well. We should have done it earlier, before the new growth, but we needed gardening gloves. Those blades are finely serrated and sharp; they’ll cut your hands to pieces in a series of paper cuts. You’ve heard of Death by 1000 Cuts? That’s what it’s like to tackle Cousin Itt without gloves.

So after running out for gloves on Saturday, Sweetpea and I got the job done. We try to avoid having to rake up all the leaves, so we just cut bit by bit. I would grab a big handful, she would cut it off with the shears, and I’d drop it right into the leaf bag. It’s not the speediest method but it makes up in efficiency.

But it’s funny how much different he looks. This is the final product.  And you should have seen it before he got a final once-over with the electric shears. It looks like a 5-year old that just cut his own hair. But don’t fret; within a month or so, he’ll be back to looking like his usual hairy self, albeit taking up a bit less space.

The whole experience, out there in the fresh air, the sun beating down on me, working with Mother Nature’s children, totally makes me want to move into a Condo and stay inside all day. Mr. Greenjeans, I will never be. And that's your second ancient TV reference for this story.

An apt cartoon from Sunday's Funnies, Pearls Before Swine, by Stephen Pastis.

But along the way, some True Believers have made it to the top levels of government

That's the problem with creating a monster to serve one's purposes -- the monster tends to get out of control and eventually take over. The Republican party started pandering to the fundamentalists in the 1970s, and over time they've become the dominant element in it.

As the saying goes, do not call up that which you cannot put down.

Exactly. We now have the Evangelical Inmates running the asylum.

I'm with you on it all. And the last part especially. My hubby wanted an acre. I would be happy in a condo. The maintenance and of course I am sucked into his dream. I am a mulching, weeding, trimming, cutting fool. I think it sucks!

I think I was genetically designed for apartment/condo living. Yardwork was ok when I was younger, but now, I always feel beat up afterward. And I hardly even do anything... Sweetpea has been maintaining her place since forever.

Go get your 2nd Booster, I got mine Today and they told me I was getting some of the last supply they had left of the Pfizer! So, clearly supplies are low like they are on damned near everything from Baby Formula, to Pet Food and now even Gas at these ridiculous prices! Yes, the Far Right Lunatic Fringe are fairly predictable about how they bait their Base to get the Votes of The Cult Members completely blinded to Facts and getting their information from the likes of Faux News and Memes. Every one of them I've met seems to be living in some alternate Reality of their own making and Vote for who Hates the same people they Hate... since, they don't seem to see every Citizen as an equal, but somehow feel Superior to anyone not exactly like them. Since they are NOT the Majority, then the rest of us who ARE the Majority need to cast our Votes and stand firm on the real Issues and not the fabricated and embellished ones used to be the Red Meat Bait for an easily manipulated and ill informed or Fanatical Fundie Base.

Yeah, I really need to get my booster this week. That plane trip is coming up soon, weekend after next. And the objective of the trip is to attend a memorial service for my brother-in-law, so there will be a lot of indoor mingling.