To celebrate the Orioles climbing out of the league’s cellar, (thanks for nothing, Pirates), I went to see the O’s play the Texas Rangers on Saturday.  Pinky had to work so I took Sitcom Kelly with me because going anywhere with her is guaranteed to provide blog material.
But before I even got to the game, I came up with an item that is going straight to the Book of Bluz:
Bluz Maxim of Public Transportation: If you miss your train or bus by less than a minute, the next one will be late.
Never fails… I decide to park in the back of the lot, where shade will be later, attach The Club, fiddle with the sunshade, and by the time I get out of the car and start walking toward the platform, there’s the train.  If I had gotten started 45-seconds earlier, I could have been within running distance to catch it.
Then again, I didn’t have to run, which is a benefit in and of itself.  And yes, I know the exact spot that if I’m not at least that close to the station, I will be unable to make the train even if I run.  Nothing is worse than making a hot sweaty fool of yourself by running like a madman across the parking lot and then miss the train anyway.  As the train pulls away, you can see all the people on the train looking out the window at you and making the “L for Loser” sign on their foreheads.
So now that I’m ensured of having the maximum wait time for the next train, it ends up an additional 5 minutes late.  Wonderful.  And this was the day I didn’t bring my MP3 player with me.  All I had to do to kill the time was to walk in angry circles and swear.
I met up with Sitcom Kelly at the entrance to Camden Yards, where they have statues of all the retired numbers of former Orioles players.  Yes, you read that right.  They have statues of the numbers, not the players. 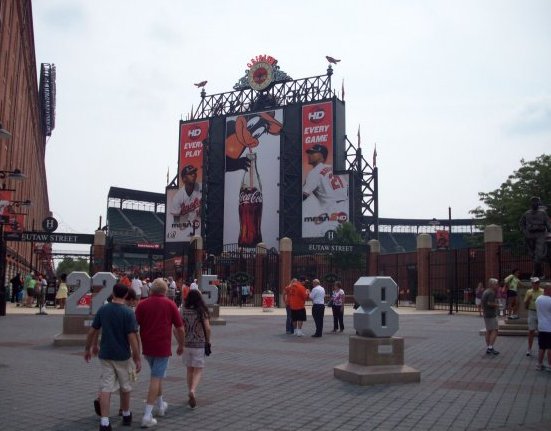 You can see the retired numbers of (L-R) Jim Palmer (22), Brooks Robinson (5) and Cal Ripken (8).  A statue of the actual Babe Ruth is at the far right.  You may wonder why the Orioles have a statue of the most famous Yankee in history.  It’s because Babe was born in the vicinity of Camden Yards.  I don’t know about that… If a famous Baltimore Raven was born right on the 50-freakin’-yardline of Heinz Field, I wouldn’t want a statue of his ass anywhere near the place.  But when you have a town with an inferiority complex like Baltimore, you grasp at any angle for reflected glory.
Before we went into the game, we sought out a local watering hole to enjoy a couple beers that we did NOT have to take out a loan to purchase.  I had picked up some dogs on the way over so I wasn’t hungry, but Sitcom Kelly, the vegetarian, was.  Upon looking at the menu, I mentioned that they had a nice grilled cheese sandwich.  She replied that she doesn’t like cheese.  I pointed out the contradiction inherent in that statement by alluding to all the quesadillas, nachos and pizza I’ve see her eat.
She ended up ordered the mozzarella sticks.  And you wonder why we’re working on a sitcom based on her.  I’m still working on her to start a blog.
Our seats were in the 8th row behind the leftfield wall. 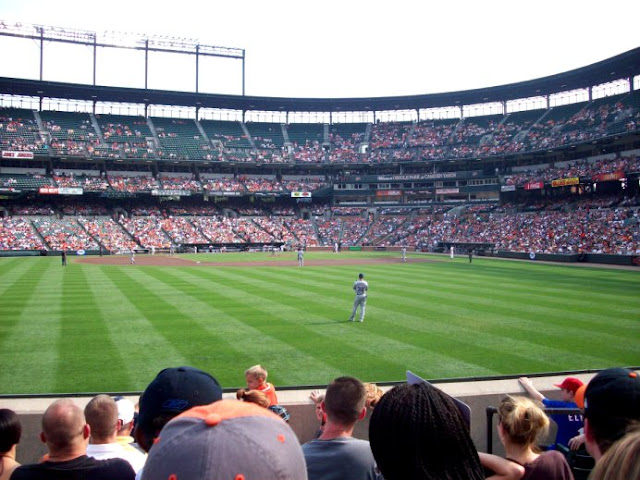 Our view.
It was pretty hot, but it’s been worse.  The sky was kind of hazy, rather than featuring the direct, burning sun, but it still continued the need for beer.
Apparently, only the moneybags people in the infield lower boxes get cup holders at their seats.  This annoyed Sitcom Kelly no end, so she fashioned her own. 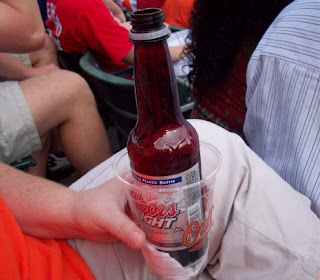 We sat beside 3 young people from Philadelphia, who were shockingly enough, not assholes.  There were 2 sisters and the boyfriend of one of them.  The boyfriend was deploying soon to Afghanistan.
If you think about it, that’s the best way to end that war… send a bunch of Philadelphians over there.  The Taliban would never know what hit them.
Anyway, they came down on a spur of the moment road-trip, just for something to do, and they were very fun to talk to.  I, of course, had a great time alluding to all the rotten things Philly fans are known for.  But you know, you can only throw so many stones when your own teams are sitting in 31st and 32nd positions in a 32-team league.
The game itself was surprisingly good.  The Orioles won 8-6 in a game that featured a bunch of huge home runs.  Rookie Orioles 3rd baseman Josh Bell hit his 1st and 2nd career homers in his first 2 at-bats of the day, and came within a foot of having a 3rd when his long fly to right hit the wall just below the top.  Kid was raking that day.
The O’s also had a 3-homer inning, as Ty Wiggington hit one 442’ to center and the next batter, Luke Scott, smacked one 422’.  Both went out in the deepest part of center field.  It was later that inning when Bell hit his second.
The first place Rangers made it interesting on Josh Hamilton hit a massive blast that cleared the 410’ mark in dead center by about 20’.  I have to estimate because the lame-ass Baltimore Sun only listed the length of the home team’s homers.  (Homerism, indeed.)  But all in all, it was a good day for guys named Josh. 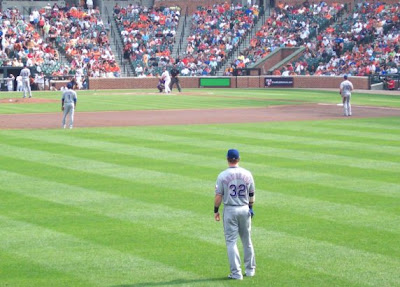 Josh Hamilton, the Rangers left fielder.
We stayed for the whole game too, which is the first time in ages I can remember still being there for the 9th inning.  Usually the O’s games are pretty much over by the 7th.
On the walk back to the subway, I noticed how downtown Baltimore isn’t completely without its charms. 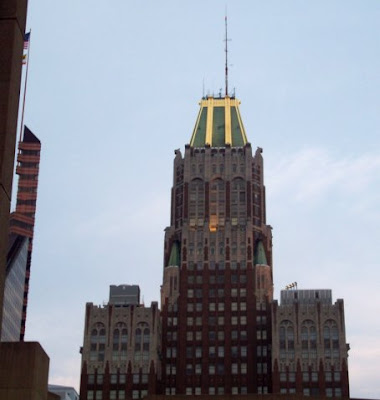 Someday I’ll get ambitious enough to learn the name of this beautiful, gold-capped building.
Before I left for the game, I set up the DVR to record both the Orioles game and the Steelers pre-season game against the Giants, which came on at 7:00.  After a much-needed cool shower, I scanned through the baseball game to see who might turn up.  I wasn’t disappointed: 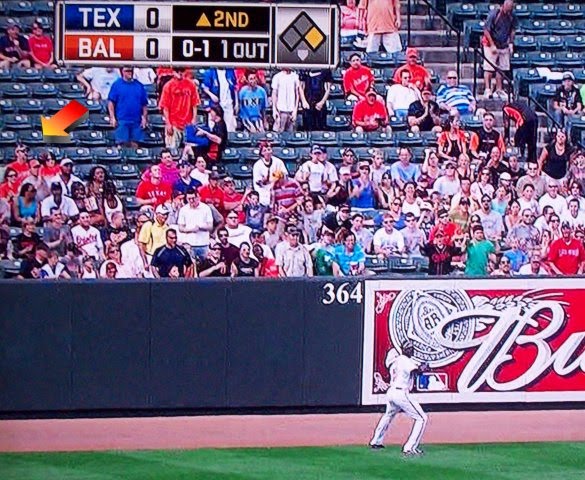 Bluz and Sitcom Kelly, two visions in orange, watch Felix Pie make a catch.
Times like this is when it SO pays off to have the HDTV and DVR.  Samson made me proud.
I also spotted us one more time: 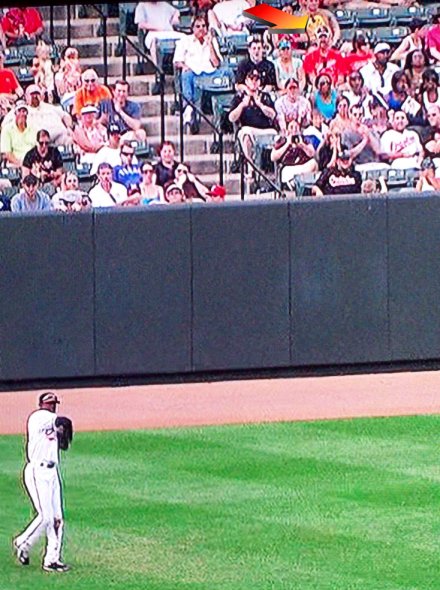 This one must have been later in the game, because the Bad-Ass Bluz Shades are off.
Next game on tap will be 9/2 against the Red Sox.  We’ll be sitting in about the same place.  I do NOT, however, expect such pleasant conversation from the visiting hordes.  Like I have time to spend 20 minutes behind some Southie trying to explain to the concessionaire what a “tonic” is.
Posted by bluzdude at 1:37 PM

OMG, you are totally FAMOUS with the 2 blips of you on the TUBE!
The next time you do a darwinfishfry, I think you need to bring sitcom kelly... Which, of course, would mean it would have to be in Baltimore but... I'm just sayin.

Woman,
You know, I kept waiting all day for my phone to ring with people wanting to tell me how they saw me starring on TV. I can only figure that there must be something wrong with the phones.

I don't know if SK will be able to leave her house for any length of time... someone has to feed the hockey player she keeps in The Pit in her basement.

I can't stand baseball (balls flying at my head scare me) (insert joke here), but I actually think I'd like to go to a baseball game with you.

Bachelor Girl,
You come to Baltimore one summer and I will be happy to take you to a ballgame at The Yard. And I promise to bust any balls that come flying at your head. (There's my inserted joke.)

Statues of the NUMBERS? What a cop-out! I'll bet they saved a lot of money, though.

Judie,
You bet they did. Plus, that’s pretty much the limit of imagination out here. This isn’t a place for starving artists, it a place starving FOR artists