When We Are Old and Gray

You will not believe what I am subjecting myself to this evening.  Remember back in December when I posted about all the lame Christmas music I hated?  And Bluz Enemy #1 was… 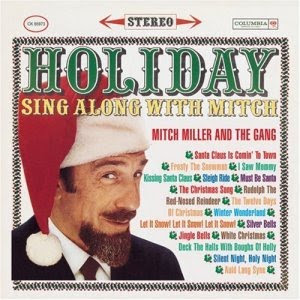 Gaah!
Here I sit tonight, playing a heartless, soul-less Mitch Miller album so that I can transfer the song onto the computer as MP3s.  I then have to burn them onto a CD, but at least I can do that quietly.  But right now I have to play each song all the way through, to get them transferred to the PC. 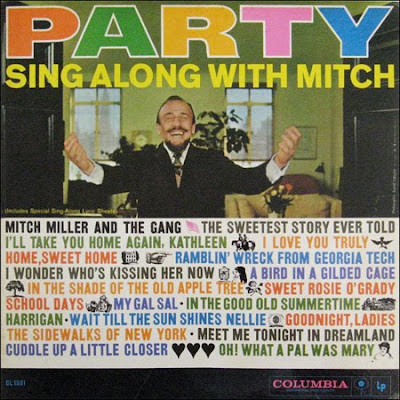 This is the album I'm recording tonight.  Look at that cover.  If I ever show up to a "party" and that is what I see when I come in the door, please, someone just shoot me.  That's a face that says "Unspeakable things are about to happen to you before you wake up in a seedy hotel bathtub with bandages around your waist."  What you can't see behind the song list is the coffin from which he just arose at sunset.


This is killing me.  Thank God these songs are short.  At least they're not Christmas songs.
I’m doing all of this for Pinky and her old people.  She does God’s work.  (And no, I don't mean killing them all and sorting them out later.)
She is an activities person at an assisted living facility for seniors.  She’s at one particular place now, but she also has her own business doing sing-alongs and art classes, so she always needs new material.  The people at her current place asked if she had any Mitch Miller.  She didn’t, but she went online and bought what she thought would be a CD.  Unfortunately it was an LP.  So now it’s Bluz and his multi-media studios to the rescue.
You know, it’s bad enough getting old without having to listen to Mitch freakin’ Miller.  This whole album sounds like a radio commercial from the 1940s, and not even the fun stuff like Big Band.  Even the nerds in 1940 must have been going, “Geez, that’s lame.”
Do you ever think of what it will be like when we hit our 80s and have to go to The Home?  What do you think they’ll be singing to us then?
How will they be able to pull off singing the touchstone songs of our youth?  It won’t be enough to just be able to sing; they’re going to have to be able to howl!  (At least for the songs I’ll want to hear.)
It’s going to have to be karaoke, won’t it?  Because how can you possibly hope to pull off songs like “Whole Lotta Rosie” if you don’t have the guitars?  Can you possibly perform “Hot for Teacher” without a double-bass drum kit?  If I’m in that audience, I’ll be throwing pill bottles if they skimp on the amps!  You think it would be too much to ask for some lasers and a fog machine?
But that’s the good thing about being that old and rocking out… they HAVE to turn it way up in order for us to hear it.  People will be driving down the street in front of the center and be all, “Damn, those geezens are jammin’!”
In all likelihood, I’ll have to flash back to my DJ days and get up there and spin the tunes myself.  I’ll probably have to use the next available music technology though… no LPs, no tapes, no CDs, no MP3s… by that time they’ll probably have chips embedded in our heads through which they can directly broadcast songs (and orders) into our brains.
H-A-double-R-I, G-A-N spells Harrigan…
Wait a minute… what the fuck is that?  This shit must be sinking in.  Oh, man, only 2 songs left.
If I have to listen to old shit, I much prefer something from 50s scalawag, Tom Lehrer.  I must admit, I learned everything I know about old age from one of his songs.

“Since I still appreciate you
Lets find love while we may,
Because I know I’ll hate you,
When you are old and gray.
So say you love me here and now
I'll make the most of that.
Say you love and trust me
For I know you'll disgust me
When you're old and getting fat!”

Play the video to hear the rest… it’s worth it.
But now it’s time for me to rejoice!  The record’s over and I never have to listen to Mitch Miller or see his pervy-assed goatee ever again!

Gaaaaah!
Posted by bluzdude at 7:08 PM

Dude, that is TRUE LOVE right there.

Well, she takes very good care of me, (and her old people) so it's the least I could do.

And like every horrifying experience I go through, I know I'll get a post out of it.

They damn well better have Lady Gaga and Sublime when I'm in the home.

Or at least The Chipmunks Christmas Album.

You are truly a saint. And my hero all at the same time.

Cassie,
I am now picturing a bunch of middle-aged activities aides dressed up like LG and strutting around the home.

Christy,
Eh, I wouldn't use the "h" word... Pinky's the one that's making peoples days and lives better. I'm more like the roadie.

Well that'd be for my generation. Yours will be all black lights and Pot.

My people would probably wear t-shirts, faded jeans and long hair with a cowboy hat. Either that or a disco leisure suit.

Awww, now I'm compelled to get PawPaw's music collection and copy it for you & Pinky so they can remember... Like when they were 17 and working in the shipyard while big brother was at the war and their "steady" shared some of the rationed food.
You know, the good times.

I'm really hoping for some early eighties when I'm in the home. Who am I kidding? I won't be able to afford a home. I'll be living in my son's basement.

By the time we're old and in the home, kids will think 80s rock is as lame as Mitch Miller.

"Rainy Day Woman", "Work With Me, Annie", "Black Magic Woman", "Sexy Ways" is my Home playlist. Anything by Hank Ballard and the Midnighters is ok. And I will definitely need Santana. Maybe a little Stravinski when I'm feeling grown up, uptown and intelligent. Amos always liked Igor.
Pinky and Bluz get my vote for sainthood.

Woman,
Just do me a favor and make sure it’s on CD, so I can be left out of it! I’ve done my good deed for the year.

Big Sis,
I don’t have any kids… I wonder if my nephews will mind. It’s either them or the Motel 6.

Jessica R(abbit),
No way! I’ll just drag out a picture of Slash, play the solo to Sweet Child of Mine… case closed.

Of course, it they counter with something lame and gloomy like Depeche Mode, I might have some damage control to do.


Mary Ann,
I’m chuckling at the image of a room full of geezens enthusiastically singing “But I would not feel so all alone / Everybody must get stoned!”

(Our cat, Amos, enjoyed classical music, but hated bluegrass. It’s jump up onto the turntable if it was played for too long. No wonder our Flatt & Scruggs records looked to be in such bad shape.)

As for being a "saint", it looks like I'm more of a "martyr". Pinky just told me that the entire CD is not in her key, so she can't use it, meaning I went through all that torture for nothing.

I'm checking into whether that violates the Geneva Convention. (I'm pretty sure the Perv-Beard does.)

Bluz, I bow to you and say that your kind deed will come back to you one day. All your blogger friends will put together music to age by. Heck! Everyone from the Burgh should arrange to be in the same home, swinging Terrible Towels and watching the Steelers with the sound several decibels too high. Pass that Mineo's pizza will ya? Eh? You got Vincent's there? Yoi and yoi.

Cher,
That does it! I'm retiring to Pittsburgh, just to watch every Steeler and Penguin game and talk sports with people that can't hear any more.

I know you think you're doing a good thing for the old folks home with this Mitch Miller crap. And I suppose you are. But wouldn't they be better served with some Count Basie or Bennie Goodman?

You need to make me a vinyl rip of that Mark O'Connor album 'On The Mark' that you posted back in March. I've never seen that thing before or since. I could hook the old folks up with some Xavier Cugat or whatever else they might want in exchange. Harry Belafonte? Let me know.

And be sure to put a version of the Pennsylvania Polka on there for them. You know, to ward off evil Shitbird spirits if the home is in the Baltimore area.

Dog,
I'll be glad to hook you up with some MO'C. Send me your email address. See your site for mine addy, or look up my profile here.

I assume that Ho Ho Hoey is your favourite Christmas album? My best friend and I listen to it every year while decorating her parents' tree back in Ohio.

My co-worker in NYC makes us listen to Mariah Carey's Christmas album while decorating the office tree, so I feel your pain.

Mundane,
Now you've done it. I checked the link you provided, and OMG... that's exactly the kind of music I love. Not only will I have to have that CD for next Christmans, but I'm going to have to start buying or downloading a bunch of Gary Hoey music.

Thanks for the tip!