Who Manages Your Checkbook?

Earlier this week, when I wrote some advice for a young friend who wants to set out on his own, the subject of how to manage one’s finances came into play.  I thought it was an interesting enough subject to warrant a post of its own.

As a single dude in my own apartment, my current financial strategy is “me, myself, and I.”  But that wasn’t always the case.  There was that time when I was married (cold chill runs down spine), and we needed to figure out how we were going to combine two dissimilar paychecks, our house and her kid, to come up with an equitable way to manage our money and pay the bills.

There is a long history of household finances coming out of one giant pot.  But I think that the changing circumstances of modern society have made that option more problematic.  A divorce rate standing over 50% makes the odds of divorce into a coin-flip.  If the coin lands badly, it becomes a real CF to try to divvy up a single stash of cash.  (Not to mention home value, retirement accounts and investments.)  Plus, with blended families and child support going every which way, a couple may bring different situations into the household, in which a 50/50 split may not be a fair resolution.

So what’s the best system to navigate?  Beats the hell out of me.  I suppose it would totally depend on one’s own set of circumstances.  I can only tell you about what worked for us.  My marriage may have been an unmitigated disaster, but our financial plans worked very well, at the beginning and the end.

See, I went into it knowing that I’d never been married but she’d been married twice before.  Between me being “untested” and her having run through two guys already, I realized that it was quite possible that our marriage might not work.  You don’t like to think like that going in, but it can’t hurt to keep it in the back of your mind.  So I went into it looking for a way that would be fair to us both, but not so much that I would get screwed in the end.

You never really know a person until the pressure it turned on and everyone has to scramble.

Here were the basic facts:

She: Government job paying in the mid-40K range.  Two kids, the younger of whom lived at home.  (The older one was out on his own.)  Child support coming in for the young one, plus every other weekend visitation for the father.  30K in the bank from her divorce settlement.

Mingling funds would not work, not only because she made so much more than me, but she also had to support her son.  The latter would have been less of an issue, but his father was still very much in the picture.  I couldn’t exactly come off like I was his father and he was my son.  I was just the guy that married his mother and took her attention away from him.  (It wasn’t really that way at all.  I was so far down the priority list; I had to use binoculars to see the top.)

So after some negotiating, we came up with an equitable way to operate.

First, when we bought the house, she used her 30K as the down payment.  I paid about 6K in closing costs and then we split the mortgage payments.  We agreed that I would be on the loan, but not on the title.  I figured it was only fair that since she was putting down all that dough on the down payment, the house was pretty much hers.  (I acknowledge that the loan part could have been a monumental mistake, had she held it over me when we split.  But at the time, she couldn’t get the loan on her own so I had to co-sign.) 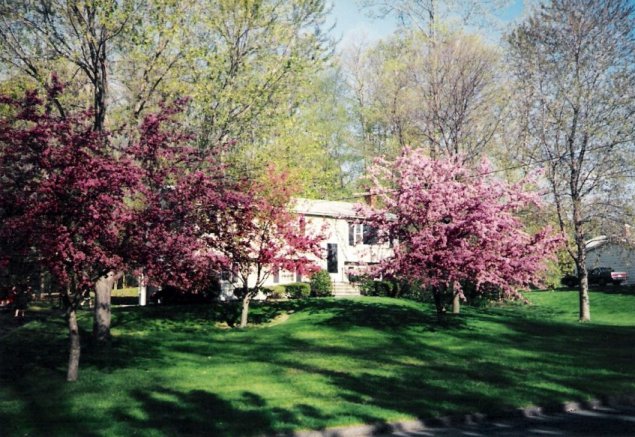 This was our house.  Spring was always so pretty, with those crabapple trees in bloom.  (Of course, raking up all the crabapples was a giant pain in the ass.) 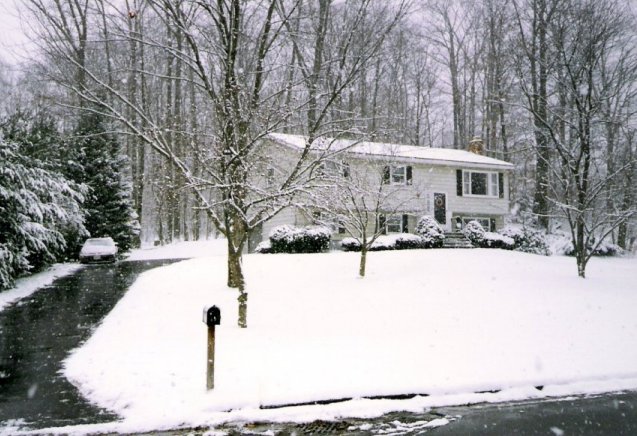 I’m including this shot because it’s one of my favorites.  We would occasionally get this heavy, wet snow that would line the tops of all the tree branches.  I always thought it looked like a “Paint by Numbers” picture.

As far as operating the household finances went, it basically came down to this: she bought all the groceries and everything involving her son.  I paid all the utility and service bills (gas, electric, water, trash, cable, etc.).  We split the cost of the various home improvements (new roof, deck, furniture).  That way, she covered any extra spending for the boy, and I was paying for the services that were more or less unaffected by him.  We each kept our own savings and checking accounts.  The mortgage costs came out of her paycheck and I would write her a check for half the total every month.

For all the fighting we did, it was never about money, other than the fact that I didn’t have enough of it, once I got laid off from the office job at my record retailer HQ.  I always had enough money to cover my end of the bills, mind you, but I didn’t have enough to pick up the check at dinner any more, or pay for vacations.

When we separated, it was fairly simple.  She stayed in the house.  I kept my bank accounts and she kept hers.  Since she had gotten rid of most of my apartment furniture, I got the stuff we bought together (sectional sofa, TV and coffee table.)  I got one of our two beds and took anything I had brought in, that was still there.

I remained on the loan for another year or two, (but not paying) until she refinanced the home and then I was free of that too.  She had a lawyer friend at work draw up the Separation Agreement, which we both signed.  Then after waiting the mandatory period, (by which I was living in Baltimore), I asked her about making it final.

Apparently I caught her at a bad time, because she flipped out (once again) and said that if I wanted the divorce so bad, I could just take care of it myself.  I told her that it would mean that “I was divorcing her,” even though the split was her doing, but she said she didn’t care.  I think she had a lot of shit going on and just thought of it as “one more thing she had to do.”

I don’t know about her, but I wanted it put to rest because, among other things, I was tired of telling prospective dates that I was “separated.”  Whenever you say that, the obvious assumption is that you will probably get back together.  It seems so “temporary.”  Ours, of course, was not.  Hell, I moved 600 miles away.  That’s a pretty good sign that I’m over it.  I just wanted to put the whole thing to bed and move on.  (I wrote more about the breakup and my subsequent move to Maryland in great detail, here.)

Anyway, I did a little research at the courthouse (a block from my office) and obtained all the paperwork I’d need.  I filled it out, sent it to her, she signed off, and I was ready to go.  We used the Separation Agreement as the Divorce Agreement, which spelled out all the details.  Without a house to divide up or a kid to haggle over, it was really pretty simple.  I took what I brought, she kept what she brought, and we split the stuff we bought together.

I just had to go down to a “friend of the court” lawyer’s office and bring my brother as a witness.  He had to attest that she and I had not cohabitated over the last year, nor had I left any possessions at her house, nor had we “slept over.”  Easy… she was in New York, I was in Maryland.  My brother and I work in the same office, so the whole thing took about 15 minutes, over lunch break.  It may have been the easiest divorce in history.

When we were walking back to the office, having done the deed, my brother said, “But when do we get to the part where I call her a fucking bitch?”

Anyway, I’m drifting a little from my initial premise.  I probably went into all the divorce stuff just so I could use my brother’s line.

But the bottom line is that we came up with a financial management system that worked for us; not just during the marriage, but at the end, when things can get really messy.

Now, what I want to know is how you do it?  Do you divide up your bills?  Do you keep separate accounts, or does it all go into one household account?  If one account, who manages the bills?  Do you have to come up with a system to fairly account for a “blended family?”  I’m interested to know how others handle this sort of thing, in this ever-complicated world.

Or, if you don’t want to share your financial secrets, you’re perfectly welcome to pick apart the strategy we used, or call us “self-fulfilling prophets of failure.”  Likewise, you may feel free to compliment our Solomonic wisdom in creating an agreement that worked, like a latter day Continental Congress.

Woodward and Bernstein had it right: “Follow the money.”
Posted by bluzdude at 2:18 PM