Lotsa strange stuff in the news this week, starting with the bizarre interview CNN’s Wolf Blitzer did with Donald Trump.  For some reason, Blitzer seemed shocked that Trump continued to double-down on all his Obama Birther bullshit.

I mean, even the Arizona Attorney General Ken Bennett, the guy that was threatening to keep the president off the November ballot without “proof” of his citizenship, was forced to back down after receiving sufficient proof from the State of Hawaii.  Here’s a guy that’s just itching to make trouble for Obama and headlines for himself, forced to backpedal like, “Oh well, if there’s proof, you say…”

Yet Trump continued to plow forward.  But the funniest part is how he offers up absolutely no evidence at all.  (You can read the transcript right here.  Take my word, as vomit-inducing as it is to read all his bluster, it’s worse to have to look at and listen to him.)  I was going to go through it all and debunk every point he makes but opted not to.  Not only do I not want to give him all that attention, but it would be a lot of work and I really just want to bang out this post and then watch TV.  Yes, I know… tough life.

And Wolf calls him on it.  He tries to bring up actual facts about the state of Hawaii’s confirmation, and the local newspapers running birth announcements back in 1961, but Trump keeps going, alleging that he had people researching it and we’d all be surprised at what they turned up.  (This is when he’s not insulting Wolf by belittling his ratings.)

When Wolfie asked him what they turned up, Trump said that he’d have to do his own research.  You see?  It’s the Republican playbook, chapter and verse.  It’s nothing but making outlandish claims, repeating them endlessly, providing zero proof, slinging insults, then claiming the win.

Anyway, that’s enough of that… Now lets go to “Hey Bluz, what do you think of…

…The Katie Couric interview with the Royal Family?  (No, not the Kardashians.)  It broadcast Tuesday night on ABC.  I’m by no means a “Royals watcher,” nor do I have any real affinity for the British monarchy at all, but I did tune in.  (There wasn’t anything but reruns on, anyway.)  I watched to see what the Princes had to say.

I’ll never forget that day, August 31st, 1997, when I heard about their mother being killed.  I was at work at the video store I managed, when I first heard the reports.  It bothered me much more than I had expected.  I mean, I liked Princess Diana and all… What guy didn’t?

I had to work late the night before her televised funeral, so I knew I would never be up in time to see it, but I programmed my VCR to record it, so I could watch it when I got up.  If I had been bummed before, I totally fell apart, watching that procession.  I felt so bad for those poor boys, their mother having been killed by a pack of jackals masquerading as photographers.  It was a very, very tough day, and from then on, I kept an eye out for news on the boys.  I hoped they would be able to maintain some of their mother’s spirit, as they were sucked into the vortex of Royal Life.

I think they’ve done very well.  Wills picked himself out what seems to be a solid, grounded (and gorgeous) wife.  He seems to have the kind of caring and sensitivity that was not really noticeable in his father.

And Harry… well, Harry just kills me.  You can see that he’s the scamp, the rascal, the mischief-maker, as younger brothers so often are.  He seems to have a permanent twinkle in his eye.  And you can see flashes of Diana on both of their faces.  All in all, it makes me think that for whatever it’s worth, the monarchy will be in good hands.

…the study that said that C-Section babies were more prone to childhood obesity than naturally delivered babies?  I would have thought that being born via C-Section might have made them more likely to leave the house by hopping out the window…

Obviously, they haven’t nailed down all the factors that might enable such a correlation.  One factor was that women having C-Sections, on average, were heavier than other moms and tended to breastfeed less.  But the results were the same even after factoring that out.  One theory was that vaginal birth might influence babies' digestion by affecting bacteria in their bellies, or release hormones that could affect metabolism.

If that’s true, I’m going to go on Shark Tank and pitch an anti-fat baby machine that functions just like a roll-out home-made pasta maker.  I’ll just soften up the rollers and widen the gap between then and voila!  Mom can squeeze’em right through, just like it’s a full-sized Play-Doh Fun Factory.

…the West Virginia pastor that died from a snake-handling ritual, just like his daddy did?  This is Darwinism in action.  Sounds to me like the Wes’ By Gawd Virginny gene pool just got a little bit smarter.

And speaking of wild things…

…the Australian lady that said she was stalked for two days and then attacked by a kangaroo?  The renegade kangaroo also attacked the family dog as well.  She said that no one showed up when she called the authorities until the kangaroo left the neighborhood and attacked someone else.  Authorities then sought and received permission to hunt the offending roos, and eventually killed two of them.  (Pictured below…) 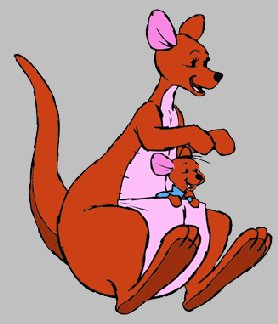 “Is that a roo in your pocket, or are you just happy to see me?”

…the Defense of Marriage Act was ruled unconstitutional in Federal Appeals Court?  It’s nice, but it doesn’t matter.  This fight will carry on until the Supreme Court rules on it.  (And indefinitely thereafter.)  Until then, this is all just the pre-game show.

…the study that says “Old Person Smell” is a real thing?  Apparently, groups of volunteers were able to easily determine which smell samples came from young, middle-aged and senior samples.

They determined that Old Person Smell is made up of Milk of Magnesia, Werthers, Aqua Velva and The Great Depression.

…that thing you forgot to include in your last Orioles game post?  I was so intent on keeping the post short; I forgot to include this cool picture.  It seems there was a bachelorette party going on at Camden Yards that day.  In the section right beside mine, there was a party of about a dozen girls, all wearing matching black commemorative T-shirts, made for the occasion.  The bride had a pink sash.

So when it came time to start putting people in the crowd up on the scoreboard, these girls were naturals.  They easily got the camera guy’s attention, who then came up to film.

So in my pic, you can see the camera guy on the lower left, shooting the girls in black on the middle right, with their images up on the scoreboard up the top left. 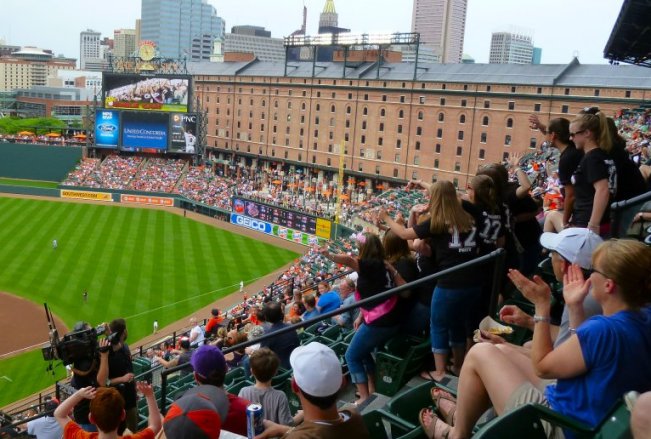 You don’t even want to know what they were doing with the Cotton Candy Guy…
Posted by bluzdude at 8:24 PM