I’ve got a busy couple of days ahead.  Not only are the Buccos coming to town to play the Orioles on Tuesday and Wednesday, my buddy from Ohio, the VP of Hell No, is coming out for a visit.  He’s attending a convention in town and my place makes a good hotel-replacement.

Well, it does AFTER I rustle up someplace for him to sleep.

With my place to myself again, I hadn’t done anything yet with the back bedroom.  Before it was Pinky’s home base, and the last girlfriend’s office, it was must where I put all my junk.  Now, with the junk gone, and girlfriends out the door, it’s just an empty room.  But I always did want a guest room.

But if I learned anything from my short-lived girlfriend experience, it’s that moving sucks.  (OK, I knew that already, but it was a good reminder.)  I could get another bed in there, but A) it does take up an awful lot of room, and B) mattresses are a bitch to move.

So I decided to look into getting an air mattress instead.  In looking them up on line, I found that the state of the art has improved greatly in the last several years.  So once The VP confirmed his visit, I pulled the trigger and ordered a really nice air mattress.

I hooked it up yesterday and hot damn, it was pretty comfy.  It has a maintenance feature that keeps the softness up to the desired level, throughout the night. 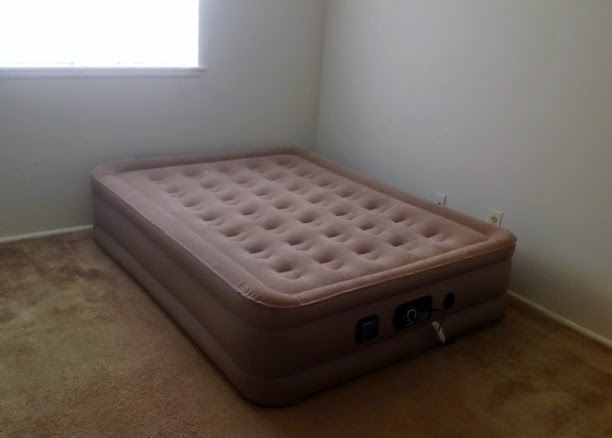 Now, I obviously don’t have much in the way of support furniture.  There’s a lamp, but that’s it.  So I figure The VP will need someplace to put his suitcase, or whatever personal effects he has.  I don’t have a table, so I improvised. 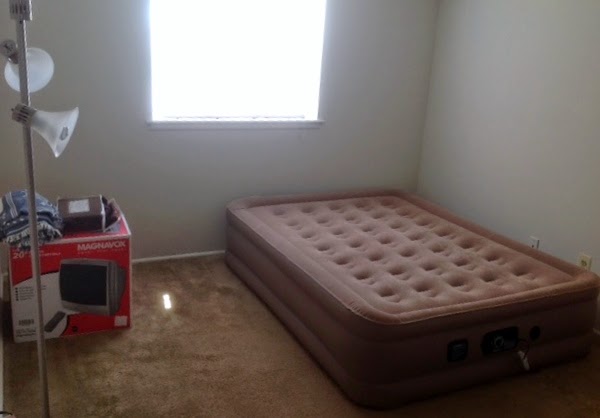 One minute, it’s a life raft and a box… 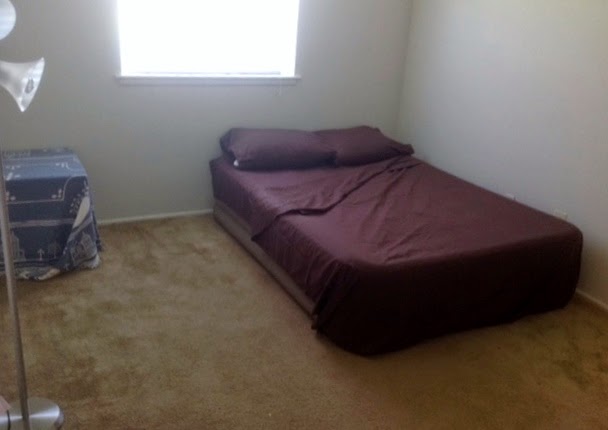 ...The next minute, it’s a bed and night table.

I’ve been doing a lot of improvising this year.  When the gf was here, she was complaining about how most of the warm air from the living room air vent was directed down behind the curtains on the sliding glass door.  And she was right; I’d been looking at that for years and thinking I should do something about it.  And then the Penguins would score and I’d forget all about it.

I heard you could get some kind of deflector for it, but that struck me as complicated.  So did this instead. 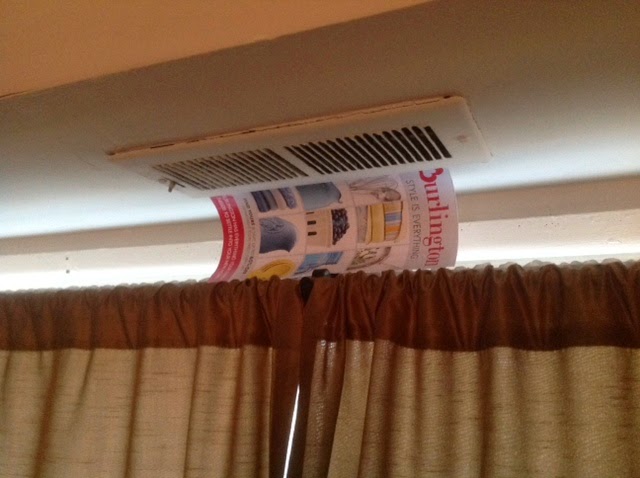 It was kind of annoying though, because the faux deflector would fall off every time I moved the curtain.  Anyway, once I began putting my place back together, I ordered a real air deflector. 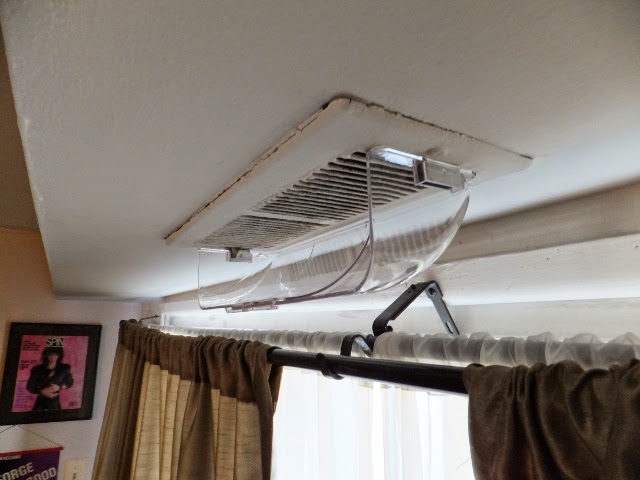 Unfortunately, it’s held on by magnets, so I didn’t get to use any tools.

Now whenever the heat kicks on, I know it’s not being wasted by blowing behind the drapes.  (And why, for Pete’s sake, is the heat still kicking on?  Where the hell is summer?  Or spring, for that matter?)

I also need to get my walls in shape.  I hate bare walls, but I don’t want to just throw a bunch of junk back up on them.  Luckily, there’s Groupon.  I found a great piece of art on canvas, which was perfect for my hallway (opposite the Wall of Hats). 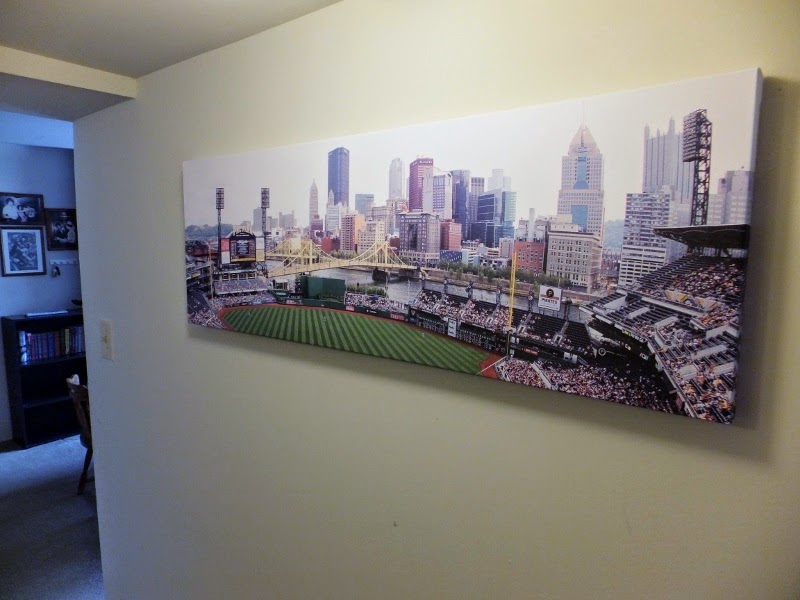 Pittsburgh’s PNC Park, and the best view in baseball.

It’s perfect for a hallway, because it’s so long.  I also plan to get some prints of shots I took of Heinz Field and Camden Yards, to go along side it.

My rule now is to only put up stuff that’s framed.  All in all, I’m looking to set up a classier joint.

I couldn’t find an Ottoman I liked (in stores) for a reasonable price, so I ordered one of those online too.  I was going to put it at the foot of the bed, but I ended up using it to fill space on the side wall. 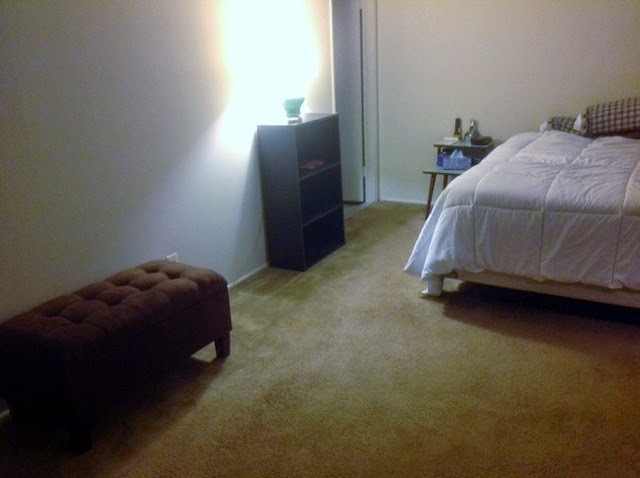 I found I missed having a TV in there.  I’d always planned to replace my main TV with a newer, bigger one, and then use the old one in the bedroom.  I was going to keep it up on my wardrobe.  But after further review, I found that it would be too wide.  I’d have to pull the wardrobe out from the wall by at least another 6”.

I started with Groupon, but after researching the model they had on sale (which included a built-in DVD player), I found that it wasn’t a very dependable model. (Hence the appearance on Groupon, I’m sure.)

So I went online and ordered a nice 32” Samsung, for about the same price I saw them for at Wally’s.  (Only without the DVD player.)  I’ve been ordering a lot of shit online over the last month, so it was funny to me when the TV was delivered the same day as a case of Listerine Flash Strips. 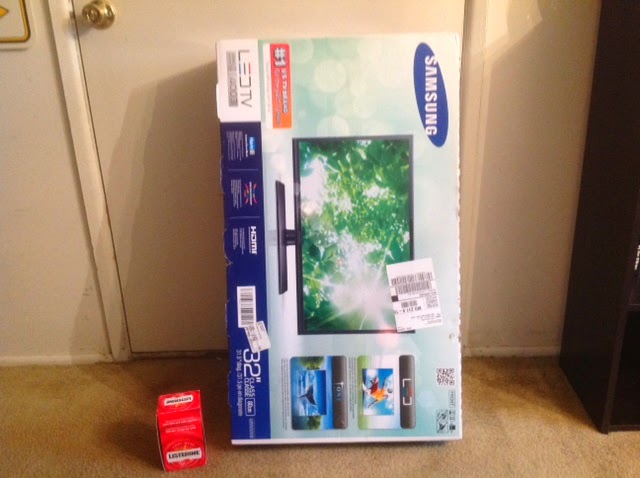 (To me, the "funny" is in the size disparity.  Seeing both boxes outside my door was funny looking to me.  Granted, I'm painfully easily amused.)

I usually buy Flash Strips in the store, but I haven’t been able to find cinnamon flavor for months.  There must be some kind of shortage, or maybe they discontinued them.

Anyway, here’s why I know I might be overdoing it on the online shopping.  See, I was bugged by not getting the TV model that had the built-in DVD.  But then I figured, “Why get a DVD?  If you get a Blu-Ray player, you can play both!”

So I ordered a cheap Blu-Ray player.  When that arrived, I realized I’d need an HDMI cable, so I ordered one of those too.  Now everything is all hooked up! 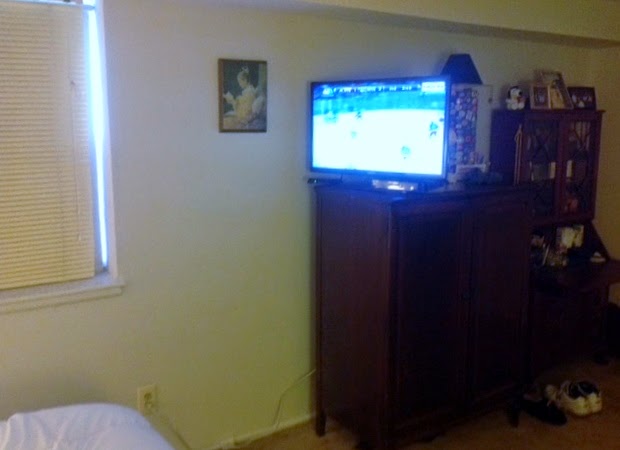 But here’s the funny part.  I really have no idea why I ordered the Blu-Ray, because I can think of very few circumstances where I would watch a movie from bed.  If I wanted to watch a DVD or Blu-Ray, I’d watch it on the big screen in the living room.  What the hell was I thinking?

Maybe one day soon I’ll get sick, and will be able to watch movies from bed instead of daytime TV.  So here’s to hoping!

One other thing… All of my deliveries came when I was at work.  I came home to find my ottoman and TV, both in giant boxes, left for me.  The delivery service also left my air deflector, the HDMI cable, my PNC Park canvas, the flash strips, and a package of game jerseys, right at the door.

But when I ordered a common $10 surge protector for the TV?  That, they wouldn’t leave.  I had to sign the slip and leave it on the door, before they would deliver it.  WTF?

So, my buddy is coming to visit.  That means there will be some red meat and beer drinking involved, I’m sure.  The last time he visited, I was pretty new in town myself.  This time, it’ll be nice that I’ll know what I’m doing.

I will need his help with one small project though.  I need to go into the bathroom off the bedroom and sit on the can.  Then I need him to hold up a mirror on the bedroom wall and position it until I can see the TV from my perch.

Now THAT’S when a house (or apartment) becomes a home.
Posted by bluzdude at 3:19 PM