I’m not up to tackling anything in depth today, so let me whip out some short and partially formed bits I’ve had running around in my head this week.  But first, let me apologize for not posting on Tuesday.  My department at work had a happy hour on Tuesday and I didn’t get home until right before the Penguins game was to start.  Not feeling capable of getting anything coherent down in such a limited timeframe (with my beer-induced limited brain power), I gave it a pass.
We had the happy hour at a Turkish place downtown and while the seating proved inconvenient for a tall person such as me, (low, overly soft ottomans around low tables) they had a neat decoration scheme. 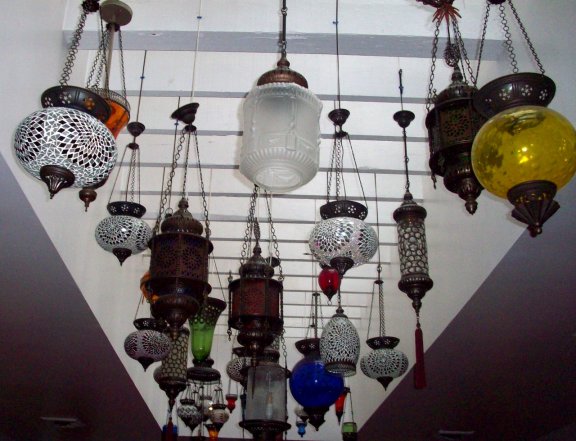 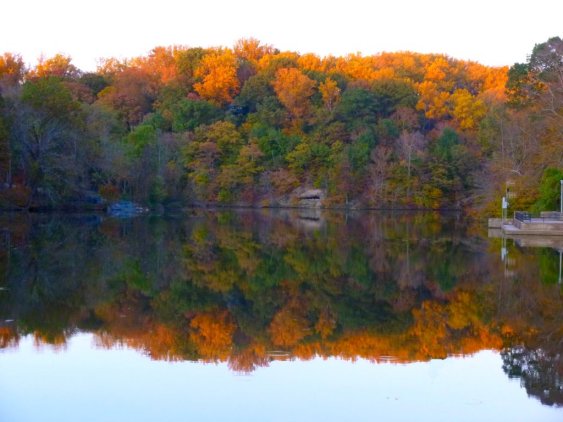 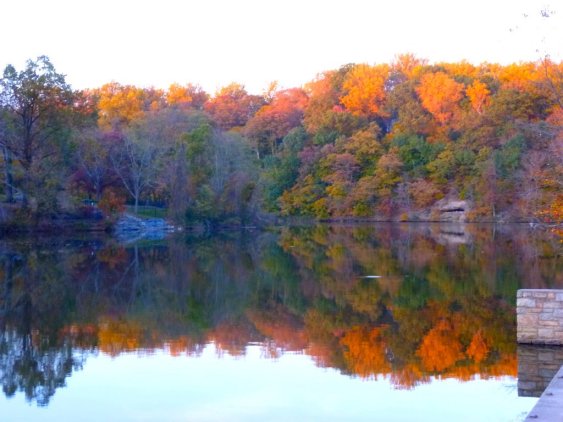 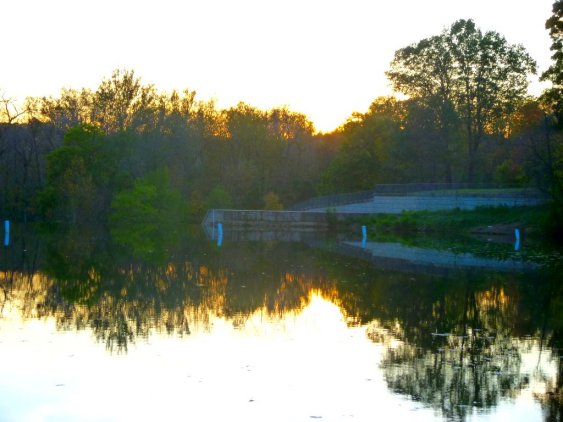 180 degrees around from the last shot; the sun sets over the top of the dam. 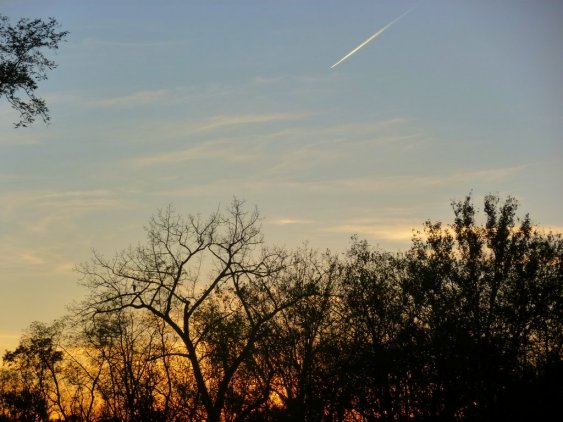 Ironically, this is probably my favorite of the lot.
Maybe I’ll catch a break and find some moments of sunlight on Monday.  But I can live with these if I have to.
Fletch Lives
One final word…  I ask you to send your best thoughts and wishes to Bluz Sister Annie, who on Tuesday had to have her beloved white-socked tabby Fletcher put down.  He was 11 and was suffering from kidney problems.  He’s lost a good bit of weight and was having trouble with balance and continence.  That it was the right thing to do under the circumstances does not make it any easier, as I’m sure many of you know.
Fletcher was a good puss, friendly to all and fiercely loyal to my sister and her husband.  He’s been with them for about as long as they’ve been together.  He was my sister’s constant companion; always there to listen, lay nearby, and amuse.
He is survived by auxiliary, backup cat, Gracie.
Fletch, I hope you finally can get those squirrels. 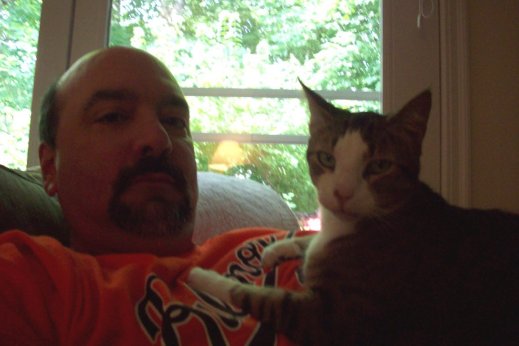 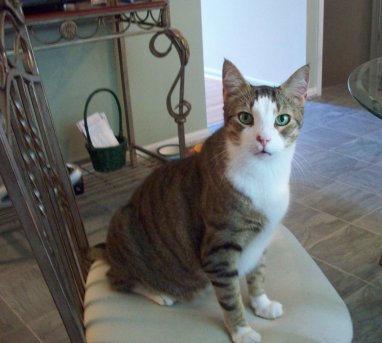 DVD Director’s Commentary: Today’s title is based on a song by the southern rock group, The Outlaws.  Kudos to any good redneck that caught the reference before reading this far.
Posted by bluzdude at 1:13 PM

I didn't get shit for fall photos this year. I don't know about down there, but up here, we seemed to miss out of the pinks and magentas that we usually get. I don't know why, but I was bummed. And I'm sorry to hear about Fletcher - that's never easy.

Beautiful foliage. Angles of light look truly magical.
Our Friend, Fletcher, lives in these pictures.
Once,during an early visit to the vet, Fletcher wanted down from her arms to explore the new place. He wiggled but she held on. Finally he turned and smacked her across the jaw with his paw. She loved him as we do.

Gina,
Every fall, I miss the time I spent in Albany NY. The fall colors were unbelievable up there.

There is a lady here I've seen at Walmart a few times who has a giant, natted bee hive hair do whose smell will leave you running for the toilet. I wonder if they smell that bad how they don't smell themselves? Are their noses broken?

And those photos are beautiful! Our trees don't turn down south until around Thanksgiving, though I did see one rebelious tree turn bright yellow this morning!

Jessica,
I think that's because one can rarely smell ones self. (Or else we'd never be on the can for more than a minute or so. Or notice when we have on way too much perfume or cologne.)

I would hate to miss fall colors, although I'd gladly do without winter.

Condolences to Annie. I can't even bring myself to think about losing our dog some day. They are a big part of any joy you have in your life.

I hear you about the politics. It all builds up in me and then it's like a) what haven't I said already, and b) what does it matter? Truth is, both parties are 100% bought and paid for. They both sing and dance for their bases and then they go behind closed doors and drink with their buddies from Goldman Sachs. The 1% remains the 1%, no matter who's in power.

Carpetbagger,
Yeah, I know that both parties are bought and paid for. So all things being equal, I throw in with the ones that are at least trying to do things that I want done and refraining from doing what I don't. One party is trying to regulate, the other is trying to dismantle regulations.

We know what happens when big business is left to their own devices. See: Economy, 2007. See: Safety standards. See: The neutering of the EPA.

Those lamps are pretty cool! And being in the West Coast - I so miss the red leaves in the fall, and going apple picking with my nieces... Not sure if I'd give up my West Coast life for the red leaves and the sugaring off in Spring, but seeing the pics was nice.

oh and...
p.s. being a non-citizen I don't get to vote. So I do stay away from the topic because people love to remind me my opinion doesn't count. But I DO hate it when I hear anything bad about Obama. This country obviously does not know they have the BEST president ever!

Nikki,
Just because people aren't from here doesn't mean they don't have eyes, ears and values. So I appreciate your non-participatory support.

Wow, you are a nicer person than I am when it comes to stank on the subway. I don't want to embarrass anyone, either, but there is not a chance I would've stayed in those seats. I really have fears that smells are clinging to me, even when I'm just in a bathroom for three minutes.

Mundane,
I didn't feel too badly about when I got up because the lady seemed to be out cold. But even so, I didn't want to come off as prissy. But geez, I didn't wanna hurl either.

My condolences on your loss of Fletcher. No matter how long we have them, it's never long enough.

No, nothing has changed on the political front, but OWS has at least started to change the conversation and they're staying power has forced the media to deal with them a little more seriously. I'm heartsick over the Iraq vet who was brutalized by Oakland police. Kent State is still burned in my memory. Videos of Oakland could be transposed w/the streets of Syria and no one would know the difference.

Your photos are beautiful. Love the purple colors you captured.

Jayne,
I hope that Oakland is an isolated incident. They're starting to make noises here in B'more about clearing the protest spot by banning camping out over night. Could get ugly here too. Of course if they did so during a Ravens game, I bet no one would notice.

Sorry to hear about Fletcher. Losing a pet sucks. :-(

I missed the leaves pretty much completely this year. The weather just didn't cooperate on teh right days.

So I'm new here and it didn't take long to see that your are a Steelers fan. I think it was all those Lombardi tophies that tipped me off.

I'm a Colts fan myself and I really dislike the Steelers but I'll follow anyway because I haven't encountered too many football fans on here.

Sorry about Fletcher. Pets are like family and it's never good to see them go. I just did a post on my pet. You should check it out!
http://loadsofwork.blogspot.com/

Michelle (Burgh Baby),
Yeah, it's really easy to miss the window of opportunity. Last year I didn't get a single fall picture either... was never sunny on a day I had off while the leaves were in color. Got lucky this year.

Danjor21,
Welcome aboard. We may not like the same teams but surely we can unite against a common enemy: The Patriots!

I'll check out your site.

I have a very sensitive nose, and would have sat in the bus driver's lap before sitting next to someone who smelled bad. I once walked out of a drawing class because the instructor smelled so bad that I could not concentrate!

Subway may be "fresh" but just check the sodium content of one of their subs. It's more than the law allows!

As always, Bluz, your photos are fabulous! I hope you will include them in the next calendar!

Judie,
Yeah, I've got at least 2 of those shots pegged for the 2012 calendar.

Our beloved Siamese, Amos, also succumbed to kidney failure at 17. Seems to be a major point of weakness in kitties.

Condolences. We're dog people because I'm horribly allergic to cats. "Pet" is such an inadequate noun to describe the significance of our four legged family members.

In my ideal world where I make all the rules, left turns would be banned during rush hour.

I love your photos.

So awkward when you choose a less than optimal seat on public transportation and you want to move. But I would choose awkwardness over publicly barfing any day.

Deb K
Agreed… anyone that’s had a family pet can see that they become much more than animals to us.

I will allow the left turn, as long as they move up when possible so to not jam everyone up behind them. Just pull into the intersection!

Good LORD! Autumn is gorgeous where you live!

MBG,
What, they cancelled Autumn in Louisiana? Freakin' budget cuts...