It was with great anticipation that I set off for my favorite sports bar, yesterday, to partake in the beginning of a new football season.  (And a number of beers.)

The week got off to an inauspicious start here in Baltimore, with the unveiling of the new Ray Lewis stature, outside the Ratbirds’ stadium.  (No, I did not go for the ceremony.)  I had an idea of what the statue would look like, and my suspicions were correct.  It was not a pose that featured him screaming motivation and Jesus references at his teammates, nor was it a pose of him flying to a ball carrier, nor delivering a thundering hit.  It was a statue of Ray doing what he does best… calling attention to himself before he’s even stepped on the field. 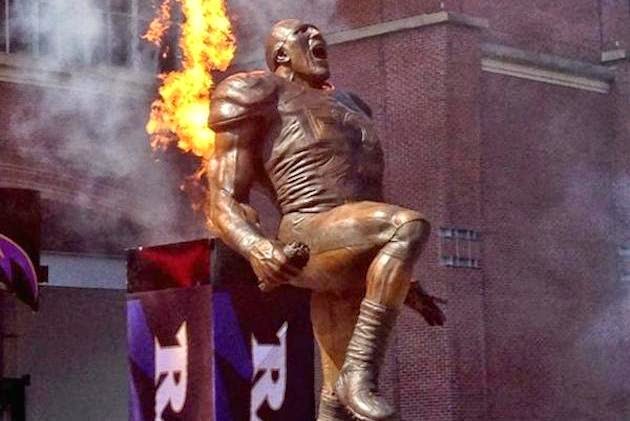 They should inscribe it right on the statue: “LOOK AT ME!” (Source)

As a football fan, I’m offended that they dared to place him in the same plaza as the statue of Johnny Unitas.  The two were polar opposites in physicality, demeanor, and class.

But I’m really kind of amused by it all, because I can’t wait to see what the local (or visiting) Steeler fans do to deface it before this week’s game.  I’m guessing someone straps a knife to his hand, or drapes a bloody fur coat over his shoulders.  There are a myriad of things that could be used to fill that gaping mouth.

Back at the bar, I’ve worked hard of the last few years, to build a rapport with the locals; even the Rattie fans.  Lucky for me, there are also a number of fans of other teams too.  There’s one guy I see every week, and every single time I stop by for lunch on a non-game day.  Dude must have a locker there.  But he’s a die-hard Tampa Bay Buccaneers fan, and enjoys harassing the locals as much as I do.  So we usually cheer (loudly) for each other’s team while we’re there.

This week, as we had discussed a month or two ago, I brought him in a Steeler jersey of mine, for him to wear and keep.  (It was a Lamarr Woodley jersey, which I was unlikely to wear ever again, ever since the Steelers cut him after last season.  It was a knockoff, but looked like the real thing.)  I tell you, it was totally worth it just to see the look on the face of the crusty guy he sits beside every week.  Anything I can do to sow a little discontent… That’s him there in front of the window, sandwiched between Ratbird fans.  And that’s me taking up the left half of the shot, sporting my new Ryan Shazier jersey.

I assumed my usual spot on the end of the bar, in the well between the overhead video screens.  I’ll admit, it’s kind of a challenge to keep up with all the games, so I try to focus on just two. 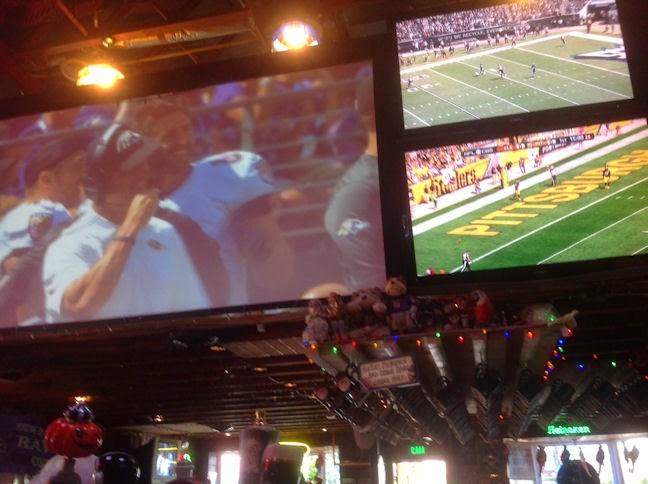 The Ratbird game is up in the middle, and my Steelers are there in the lower right.  There are also two more screens to the left of the big screen, and 4 more to my immediate right.

This week had a mixed bag of omens for me.  On the bright side, there were 3 other Steeler fans, sitting directly behind me, another fan sitting upstairs, and a whole table full of Steeler fan moms sitting on the railing of the 2nd level behind me.  That meant a lot of high fives whenever my boys scored.

On the down side, they pissed away a 24-point lead to the Brownies in the 2nd half, although they hung on to win on a last second field goal.  Could have been worse, I suppose.  But compared to the Ratbirds, I got off light.

First, they lost to the Bengals, and looked pretty bad while doing it.  And then this morning, TMZ released the rest of the video they had, showing Ratbird running back Ray Rice cold-cocking his then-fiancée in a casino elevator.

I wrote about that situation back in August, making fun of the whole “Oops I made a mistake” defense.  Like he “accidentally” smashed a woman in the mouth.

So with the unvarnished video out in public, the football Powers That Be had to make some bold moves to save face, following the embarrassingly light punishment they handed out.

Early this afternoon, the Ratbirds cut Rice, and the NFL followed by suspending him “indefinitely.”

It was a total joke; one that never would have come to be if there hadn’t been video of the incident.  When the story first broke, the league and the Ravens tried to soft-pedal it, and intimated that Rice’s fiancé bore some responsibility for what happened.  They let it come out that the video documented her role in the brief skirmish, and that would make Rice look more sympathetic.

What the video showed was that they were all full of shit.  If you haven’t seen it, you can see the two of them get on the elevator, quarrelling.  Ray kind of bump/pushes her, she shoves him and runs toward him, then he hits her in the jaw with a straight left cross that would make Mike Tyson proud.  She falls like a sack of potatoes.  1-2-3 out.

The Ravens and the NFL both claimed they had never seen the second video, but a report on Deadspin tells another story.  Months ago, two national sports reporters, Peter King (SI) and Chris Mortensen (ESPN) had sources tell them that both parties saw the video and described the contents, which the video release just bore out.

I believe that they both did see the video, but rather than take the publicity hit by coming down hard, they tried to downplay the savagery of the attack and throw some blame on the woman.  Unbelievably, they were counting on the video never coming out.

Never coming out??? The video always comes out.  Always has, always will.

But the thing is, even if they never did see the video, (which I absolutely don’t believe), it shouldn’t have made a difference.  Did they seriously think there was any other conceivable way the future Mrs. Rice gets knocked unconscious by benevolent means?  As my friend the Carpetbagger said on Facebook, “Did they think it was a tickle-fight?”

The NFL had one chance to do the right thing and they botched it completely.  And now they’re trying to put the toothpaste back in the tube, un-ring the bell, and close the barn door after the horse ran the Kentucky Derby.

As for Mr. Rice, I’m sure he’ll become “unsuspended” sometime late this season, or for next season, and another team will pick him up.  Probably the Raiders or Browns.

As for the league, they’ll recover from the PR hit.  They always do.  I mean, I’m still watching and so are zillions of others.

And as for the Ravens… well, I’ll let you know when they plan to unveil the new Ray Rice statue.

Maybe first, they ought to stop drafting guys named “Ray.”
Posted by bluzdude at 8:17 PM