What a Snappy Dresser

This weekend, I took some time off from watching people trying to out-Murica each other on Facebook, to actually accomplish some things.  (“I’ll see your eagle and American Flag collage and raise you a 105-year old WWII vet.”)

OK, I’m just kidding.  I hardly accomplished anything this weekend.  There was just this one thing… And it was kind of a big deal, for me.

As you may recall, my back bedroom has been basically empty since last April.  I’ve tried to refrain from filling it up with junk, so it can function as a guest bedroom.  I might have gone a bit too far because four stark walls, with nothing on the floor, doesn’t make for a very inviting guest room.  And since the CFO and his giant son are supposed to come visit this summer, I figured I should at least provide them with somewhere to put their clothes and stuff, besides their suitcases.  So I bought a dresser.

Now, in my upbringing, Dad rarely put anything together; he almost always made a play for the floor model.

My friend, the VP of Hell No, he could fashion an ornately carved dresser out of an oak tree, scrap metal and a donut, using nothing but the tools sitting around his garage.

My Blog Sister (“Blister?”) Cassie would find a second-hand dresser with a drawer and two legs missing, and turn it into a showpiece with nothing but sandpaper, stain, and the force of her will. 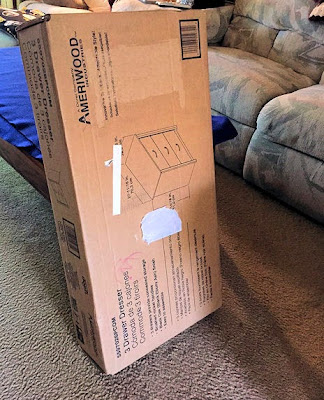 Despite my frequently telling tales of Bluz the Incompetent Handyman, I am adequately proficient with basic tools and following instructions.  I’ve assembled much larger things than a simple 3-drawer dresser… like my corner PC desk, my 1994-era entertainment center, and other media racks and such.  I just had to make sure I took my time and followed the directions carefully.

So, Saturday afternoon, I tackled my chore of the weekend and began banging out a dresser. 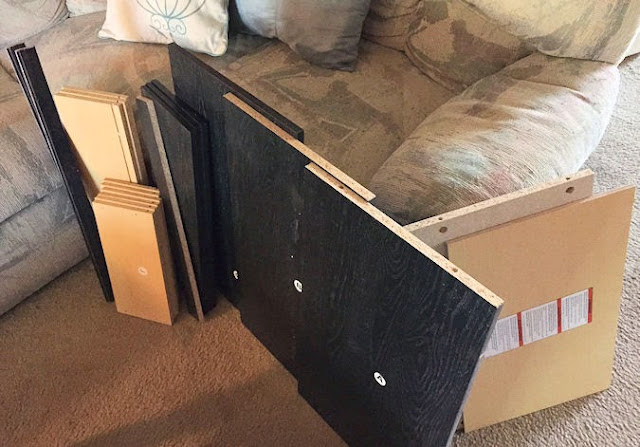 Yep, all the big pieces are there.

Luckily, I had plenty of time to get my power screwdriver all charged up.  Otherwise, I would have needed to ice my forearms for a week.

One of the steps specified that I take diagonal measurements and ensure they were equal.  I was thrilled because that meant I got to use Grandpa’s tape measure.

When I was in Pittsburgh for Grandpa’s funeral a couple weeks back, Dad wanted to pass something of Grandpa’s on to me.  None of his personal jewelry items seemed right… his watch would have been nice, but I was literally wearing the exact same watch.  Then I saw his locking tape measure and knew that was the perfect item.  Grandpa was very exacting in his measurements and I knew that this tape measure was the perfect avatar.  Either that or a level.  Grandpa wouldn’t hang a roll of toilet paper on the spool without getting out his level. 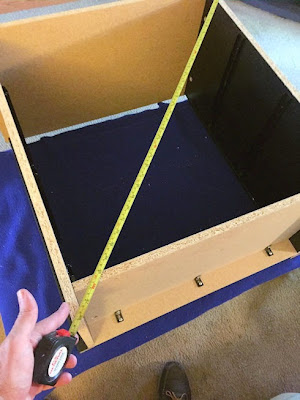 “Thanks for the assist, Grandpa.  Too bad I couldn’t find a level as well.”

Naturally, I didn’t notice the difference until things didn’t line up later.  But I figured it out soon enough, and it didn’t set me back too far. 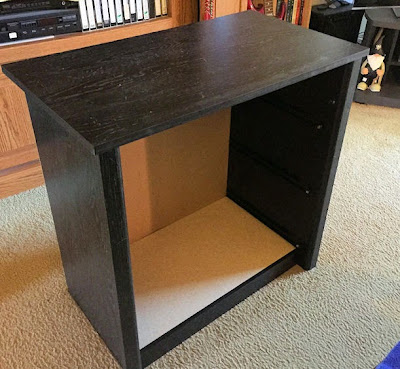 “Oh my God, where are my drawers?”

The biggest problem was that while they seemed to have included a number of extra hardware parts, I was short by one small flathead screw.  I needed one more for the metal slider rails on the drawers.  I swear, I looked all through my hardware and screws (which I had already sorted into like piles), and all over the floor, but could not find it.  I was going to have to rely on whatever I could find in my random box of screws in my tool bag.

I found a number of screws that were the proper size, but they were round on top instead of flat.  When I tried one anyway, it looked like the end of the screw would stick out too far on the rail, and maybe keep it from opening properly.  The whole detour cost me about a half hour.

But not to worry… the drawers ended up opening and closing just fine, and I had me a dresser! 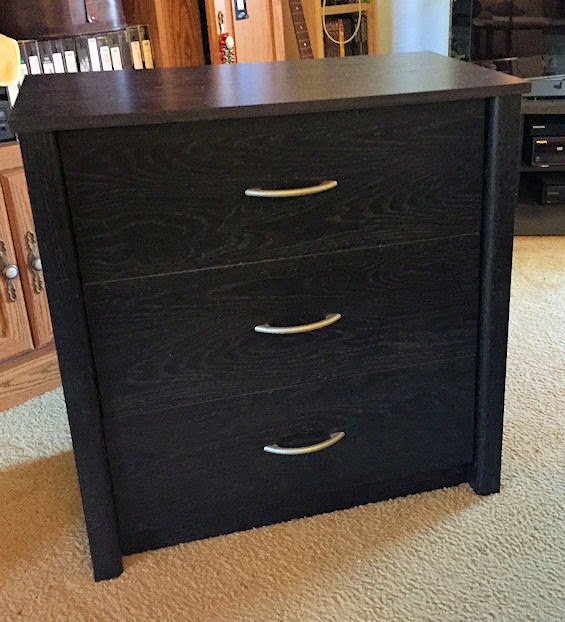 Naturally, as soon as I was done, and cleaning up the spare parts, don’t you know I found that little son-of-a-bitch screw… sitting right there on the table, where it was supposed to be. 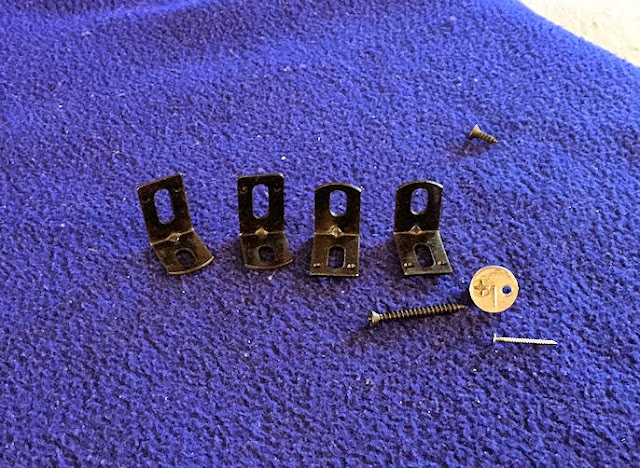 There it is, at the upper right.

If I didn’t live alone, I would have sworn that someone moved that fucker when I wasn’t looking and then put it back.

So now the guest bedroom has something in it besides and empty microwave box. 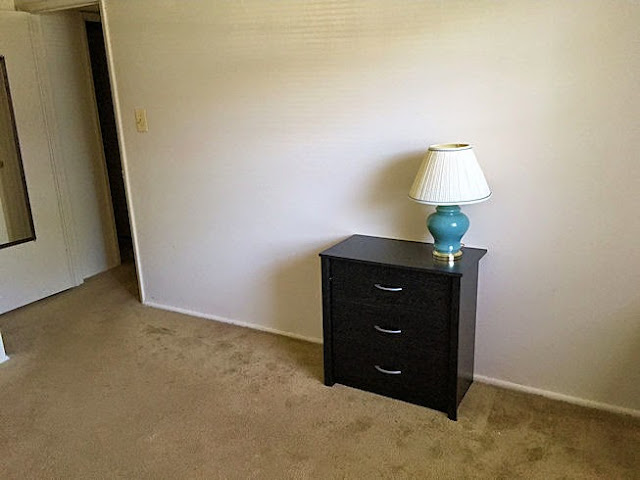 When I emailed some pics to my folks, Dad asked me if I was sure it was level.  You know, because Grandpa would have expected nothing less.  Remembering that there is a level included with the iPhone compass app, I checked it out. 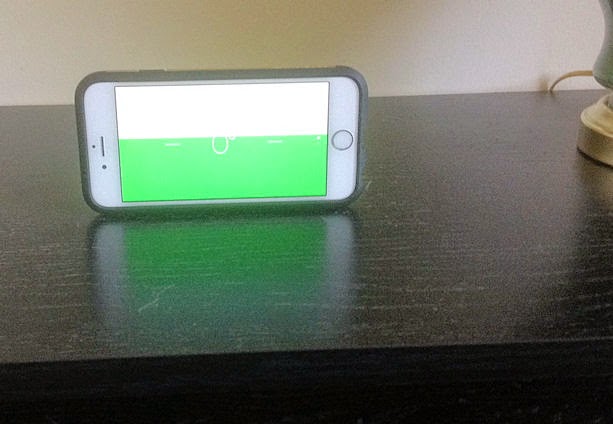 Good thing too.  I’d have hated to have to jam some of those extra parts under one side.