You know, when your day starts with listening to Zorba the Greek in the car, you know you can’t be sad, even on a Monday.

Count DeMoney (“Dee-mo-nay!”)
Can someone please wake me up after the 2016 elections?  It seems like the campaign has already been going on for years.

OK, it doesn’t seem like it, it has.  The Republicans have been sharpening their knives for Hillary Clinton ever since, well, forever.  But it really became noticeable over Benghazi.  I know I’ve said it before, but the only reason that it has been getting kicked around for so long is to throw shade at Hillary.  No one gave a damn about the dozens and dozens of people killed in Embassy attacks during the last few administrations.  No one even remembers.

The GOP kept opening inquiries and investigations for the sole purpose of contaminating the Clinton presidential campaign.  Which is fine, but guys, stop pretending you care about the people who were killed.

But with the heat on Benghazi dying down, (after a GOP-led investigation could turn up zero offenses), they are laughably going after Hillary’s financial stream.  Now they’re claiming that she took money for her Senate campaign from people who wanted her favor.*

Excuse me, isn’t that just like every single congressional candidate across time and space?  Please.  There is major influence being bought and sold under the guise of campaign finance, and the Republicans are the standard bearers.  Hillary should tell these clowns that she’ll open up her books right after they do.  An investigation of the Koch Brothers campaign finance endeavors, alone, would make people’s heads explode.  The GOP is only against influence-peddling when someone else is doing it.

That said; I am far from Hillary’s biggest supporter.  In fact, I’d be thrilled if some other Democrat could somehow win the nomination.  Call it Hatfield and McCoy fatigue, or, in this case, Clinton and Bush fatigue.  I don’t think the country will be best served with either one in office.

Personally, I’d love to see Elizabeth Warren or Bernie Sanders make some noise.  Yes, I know there is zero chance of either one winning the nomination, let alone the general election.  But I’ve seen very little that either one of them has said, with which I disagree.

However, the Hillary juggernaut rolls on, and if she wins the nomination, I’ll vote for her, if for no other reason than that she’s not one of those out there in Iowa fear-mongering and posing reprehensible propositions in order to win over a bunch of right-wing nut-jobs who wouldn’t know the Constitution if someone slapped them upside the head with it.

*Director’s DVD Commentary: I saw the story about the influence-peddling claims online this morning, but when I went back to include the link, I couldn’t find the story again.  Bugger-all.

The Old Game Ball, again.
I’ve been going to a lot of Orioles games this summer.  I like to load up early in the season before it gets obnoxiously hot out.  I’ve been to four so far, and am going tomorrow, and probably once over the weekend, and again during the week.  So by the time it gets smoking hot outside, I should be pretty much sick of it all.

But I’ve had a good time so far.  Sitcom Kelly and I went Monday night and got seats in the 2nd row, down the 3rd baseline. 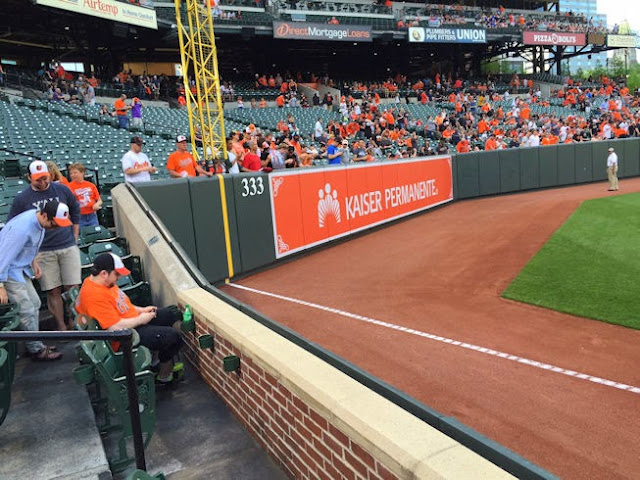 Was really hoping someone would lace a ball into “our” corner, but no such luck.  A foul ball did come our way though, landing one row behind me and 3 seats further down.

Then on Friday, I went by myself and got one of those seats where I was the only one in my “row,” because the section ended in a point.  It would have been totally cool, to win pizza for the whole row, and then have it just be me.  (Yes, I would have shared around anyway.) 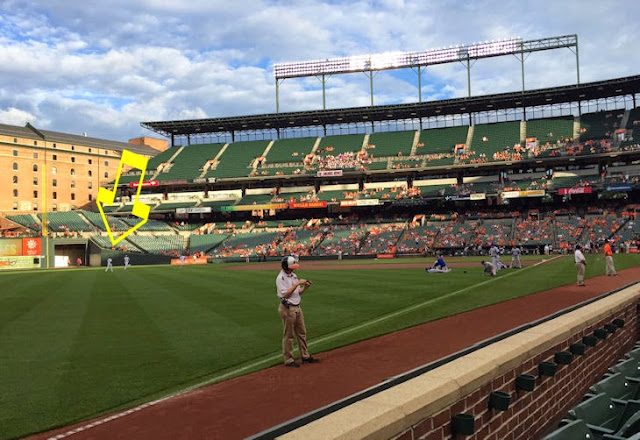 This was our view on Monday, and the arrow points to where I sat on Friday.

There wasn’t much action in this corner either, but I’m pretty sure I was on camera a lot when they were shooting the pitcher from inside the opposite dugout.  Unfortunately, I didn’t record the game because I needed to DVR the season finales of Grimm and Amazing Race.

I did snag one bit of luck though… when I “checked in” via the MLB app, (which I can do now that I’m an official smart-phone haver), I got a message that I was one of the 25 “pre-selected” people to win a t-shirt. 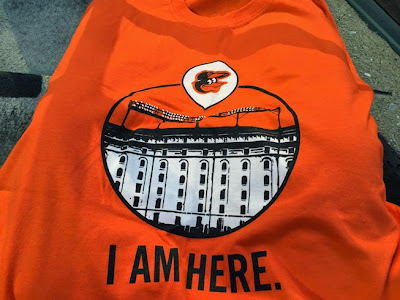 Whoo Hoo!  Because I totally don’t have enough orange t-shirts.

I really had to hand it to the Orioles sound guy that night, for pulling out the most strained musical reference I’ve ever heard.

The Angels had a player named Cowgill.  The first time he came up to bat, the sound guy played the Partridge Family’s “I Think I Love You.”  What’s the connection?

The Partridge Family TV show was based on a real singing family, called The Cowsills.

Cowgill?  Cowsill?  Booyah!  I bet I could count the number of people there who got that reference on my fingers.

And speaking of Angels, I’m pretty sure I know who these fans were rooting for… 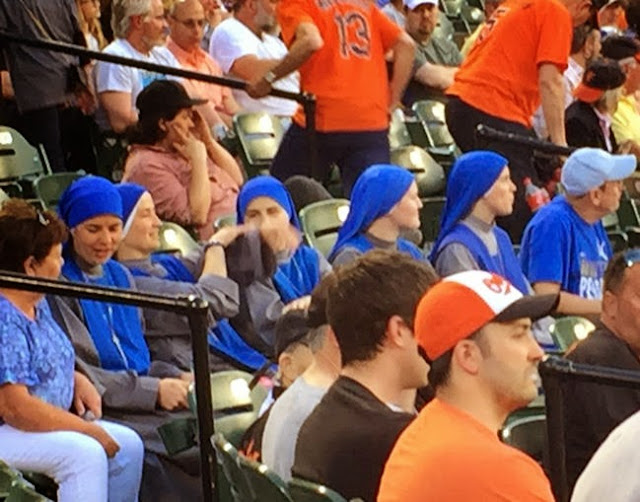 When did nuns start wearing blue?  Maybe it’s white at home, and blue on the road…

Anyway, MLB’s efforts to speed up the game must be working, because Friday’s game was wrapped up in 2 hours and 20 minutes.  Or maybe it was because of the pitching duel.  Either way, I was actually home by 10, in plenty of time to watch one of my shows.

Of course, it was Friday, so it didn’t matter when I got home.  Hope they can work some more of that magic for weekday games, when I have to get my tired ass up in the morning.

So like I said, although I was in good position to pinch a foul ball, none came my way.  But if I had, you can be damned sure I wouldn’t hand it to some kid!

There’s been a lot of fuss in past weeks, about grownups snatching baseballs and not handing them over to the nearest kid.  I’ve gone into this before, so you know where I stand.  If I come up with a ball, I’m keeping it, despite what this new chart says.  And if I AM going to give it to a kid, it will be a kid of my choosing, who may or may not be at the game with me.  It’s not my job to pacify some random kid’s tantrum.  I say, start teaching him right away that life can be unfair.  Life does not always cater to what you want, when you want it.  The earlier people learn that, the better.

That said; I’m talking about catching a ball fair and square.  I wouldn’t intercept a ball that’s been tossed to a kid, or wrestle one away from him, and I certainly wouldn’t shove an old lady away from one, like this Phillies fan did.  That’s just not right.

Of course, you have to take into account that it WAS a Philadelphia fan.  I don’t see why anyone was surprised.
Posted by bluzdude at 6:53 PM