Wednesday was going to be a big change from our usual repertoire of sitting around all day, grilling and then going out to the bar.  The CFO’s daughter, Kyrie, wanted to take me out on the town… my old college town, where she now goes to school.

It all started back in April, when she sent me a text message, asking me if I’d ever been to a particular coffee shop in Bowling Green.  She said, “I would like to have an afternoon with you to show you my BG that I have discovered since I always knew your BG.”

Are you kidding?  Roll around my old college town with my beautiful niece?  Book it.  It went on from there: 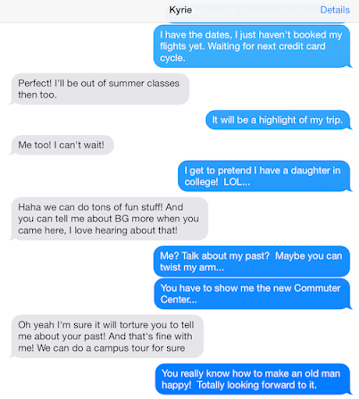 You may recall that she and I have a very close relationship.  In fact, she’s kind of my blogging “muse,” and has inspired a number of my best posts… The Elf and the Leprechaun,  Letter to a 16-year old Girl, Letter to an Incoming College Freshman, The Pros and Cons of the 80’s…

So shortly after noon on Wednesday, Kyrie picked me up and we headed down to Bowling Green.  We started off by walking around the “downtown” section, checking out all her favorite shops.  I kept trying to remember what all the bars used to be called.  There sure seemed to be a lot more of them now, though.  Or maybe I just stuck to my couple of favorites.  You know how I like routine.

She showed me that coffee shop she liked, called “Grounds.”  It was more like a coffee shop/used record shop/used book store/toy store.  Sure they sold coffee and snacks, but there was all this other stuff to look at and poke around with.  And they had this big shelf of classic board games and puzzles.  There was a puzzle in progress on an open table, which apparently anyone could stop by and work on.  It was pretty cool.  I totally would have hung out at a place like that, back in the day.

We also rolled through an antique shop.  I have to admit that it’s kind of jarring when you see relics from your own past classified as “antique.”

Also jarring was this: 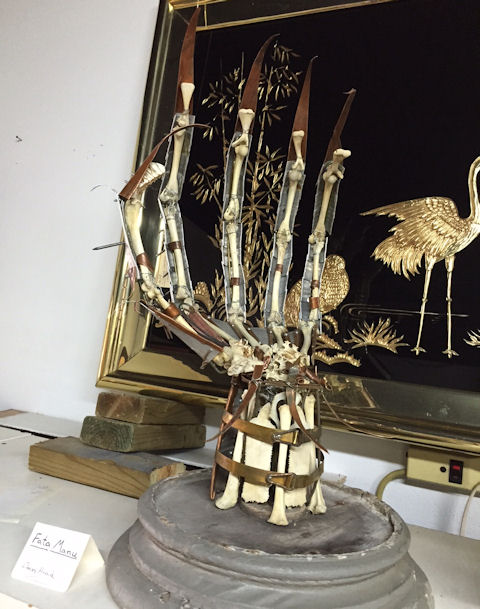 The card says, “Fata Manu (death hand).”  I don’t know if those are real hand bones in there, or if it was built from chicken bones.  Looks like the last remnants of Freddy Krueger.

Since we were in the area, we walked by my first apartment, the infamous place from my “3-way of Love” and “Summer of Bow-Chicka-Wow Wow” posts.  The last time I’d been by the place, it looked like a dump.  This time I was pleasantly surprised.

The apartment was all clean and painted up.  There were no more toys and trash lying about outside and there was a For Rent sign posted.

Figuring it was empty for the summer, we walked up for a closer look and I took some pictures. 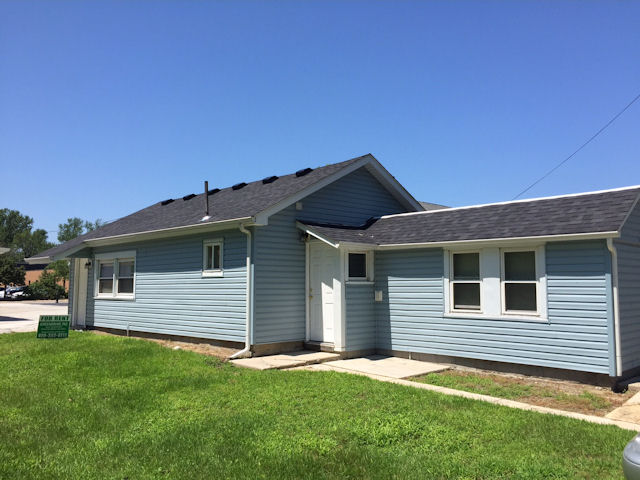 That addition in the back was the roommate’s room, back in The Day.

Imagine my surprise when someone popped out from the front door and asked if we wanted to come in and take a look around!

They assumed Kyrie was my daughter and we were looking for a place for her to live, but I wasn’t going to pass up an opportunity like that!  I explained that I used to live there in 1984 and I’d love to come in and have a look.

What as funny was that there was a trio of college students living there… 2 guys and a girl, which was the inverse of what it was when I lived there.  The place had been all fixed up… the kitchen looked new and everything had been updated.

They said the windows were still really cold and leaky in the winter, though, just like they used to be.  I remembered trying to put that plastic up over them that you had to tighten up with a blow-dryer.  They said they still have to do that.

When we got out of there, we headed over to walk around campus.  There didn’t seem to be a much of student activity going on, just a lot of construction.  Kyrie took me over to the Student Union, where they had relocated the Commuter Center.  I spend all my non-class time at the old Commuter Center, so I was hoping they had done the place justice. 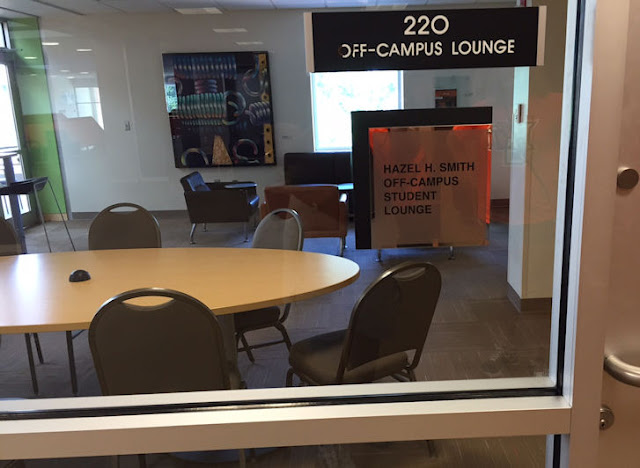 I liked the plaque, but a tiny little walled off section of chairs seemed awfully inadequate to service the entire off-campus community.  Granted, it was nestled amidst a much larger casual seating area.  They should have just called the entire section the Hazel Smith Off-Campus Student Lounge.  I knew Hazel Smith and she deserved better.

Still, that’s just a minor quibble.  I had such fun rambling around with Kyrie.  I told her it reminded me of when she was a little girl of about 4 or 5, and she and her dad and I were walking across campus.  Every time we’d pass a couple of cute coeds, she’d run up and say “HI!” like a tiny, elfin welcoming committee.

The girls would always giggle and say “hi” back, probably wondering what a cute little thing like that was doing with the least fashionable gay couple in NW Ohio.  I asked the CFO if I could borrow Kyrie one time for a solo stroll, because she worked even better than a puppy.  Who knew it would take 15 years for that to happen?

When we concluded out walk through Memory Lane, we headed back to her apartment.  If I thought it was weird that she was old enough to have a real apartment, it was even weirder when she made me a drink… a vodka and cranberry. 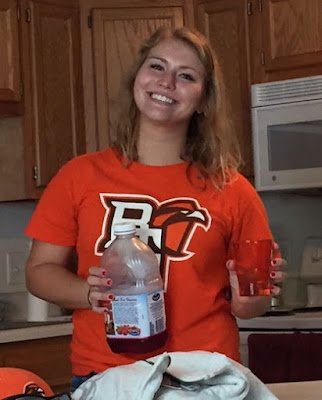 After her boyfriend rolled in, we headed off to meet up with the rest of the crew for our annual meal at Myles Pizza. 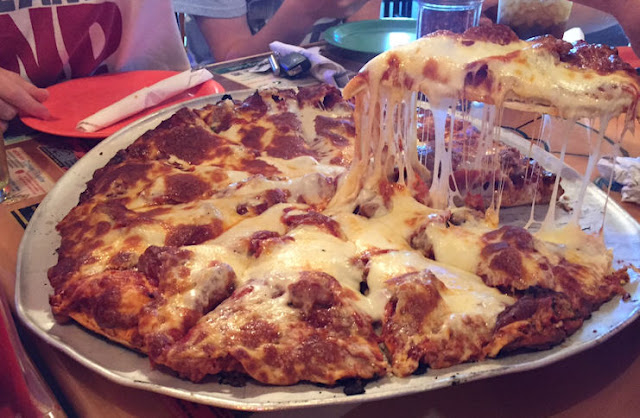 And the picture doesn’t even do it justice.  Best pizza ever.

Because the VP had to go out of town on Thursday, the CFO got custody of me for the night, so we limped back there after dinner for a night of ping pong, billiards, and party games.  We stopped by a liquor store on the way, and I spotted this: 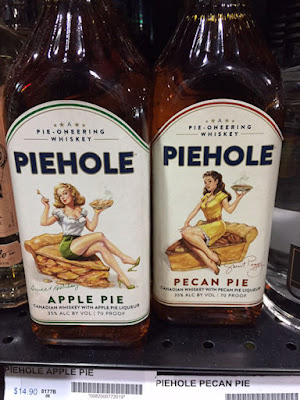 STFU!  I should make this my new avatar.

He just moved into a new house earlier this year and I hadn’t seen it yet.  It was real nice… maybe I can retire there, instead of in a refrigerator box in the VP’s garage.

Best of all, I learned that the CFO can work magic in the garden.
Never would have believed it if I hadn’t seen it with my own eyes.  Better living through Kellogs.

The highlight from Thursday was going to see the World Famous Toledo Mudhens.  Five of us went: the CFO and his son, Kyrie and her boyfriend, and I. Naturally, they lost again.  It seems like they always lose when I show up.  When I got home, I checked my records and indeed, the Hens are 1-8 when I’m there, including losing the last five.

Then again, it could be the CFO carries the bad mojo.  He never wanted that ballpark built in the first place. 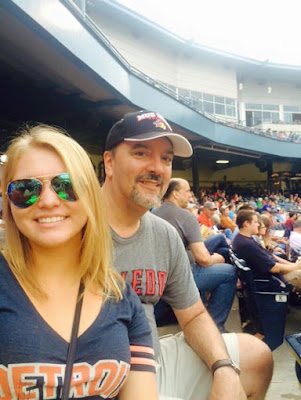 After the midweek flurry of activity, Friday was just a lay-about day, where we watched movies and worked on the leftovers from the week’s grilling, (which were still damned good!)  We finished off with one last trip to Shawn’s Irish Tavern, the 4th of my stay.  I bet they’re wondering, this week, what happened to all their profits.

Sorry, I had to go home sometime. The VP got me up to Detroit Saturday afternoon, and I enjoyed another uneventful, empty-middle-seat flight.

Thanks guys, for another stellar visit.  If you need me, I’ll be at Betty Ford, drying out.  And to the CFO… I’ll see you and the boy next week, on my turf!
Posted by bluzdude at 8:27 PM