In Praise of the Long Weekend

I really felt like I needed that 3-day weekend; it’s been a trying couple of weeks.

In the middle of June, my company relocated its office to a brand new building in a ritzy section of downtown Baltimore, called Harbor East.  It’s about a mile from the old building and smack on the Inner Harbor.

Sounds great, right?  Well, not really for me.

Sure, it’s a nice, fancy, all-glass, ultra-modern facility.  But they put us in a new “open seating” system.  You know; the worst possible situation for an introvert.

And I’d have some respect for them if they had just come out and said, “It’s the most cost-effective way to put the maximum butts in the minimum space.”

Instead, we got a lot of talk about “collaboration space,” and beautiful harbor views.  They have a number of “focus rooms” and “huddle rooms” and “conference rooms” for people to meet and work together. 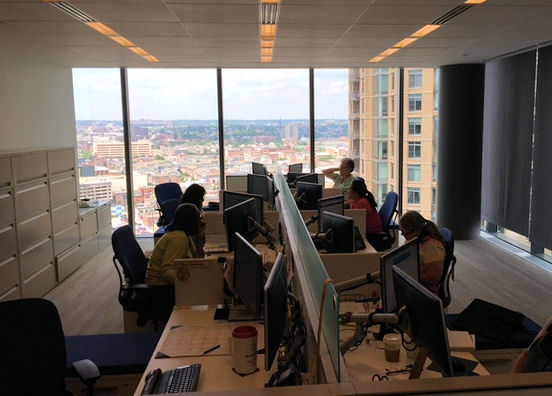 This is a shot of my area.  But thank goodness I really like my co-workers.  There are 8 of us in that little glass bump-out.

And the view?  Well, I know it sure looks good on the Harbor side of the building.  But on OUR side, the back side, we get a view of the traffic jams on the main artery in and out or the area.  On our other glass wall, we have blazing sunshine in the morning, so the blinds stay down.  Otherwise, we’d be roasting hot and unable to see our computer screens due to the direct sunlight on them.

The other problem is that my walk from subway station to office just doubled, from a quarter mile to just over a half mile, each way.  It’s not the act of walking that bothers me, but the elements are another matter.  Even when it’s “nice” in the morning, temps in the low 70s, by the time I get to my desk, I’m a sweaty mess.  And just wait until I have to walk in rain, snow, or frigid temperatures.

To make matters worse, the city just cut back on the free bus service they offer along my route.  I’d end up waiting for a bus far longer than it would take me to walk.

Anyway, it’s been a big adjustment.  At least the cafeteria is good.

Last week I decided that Thursday would be a good day to go see the Orioles, because I would be getting out early that afternoon, and would be off on Friday.  At the old building, it was about a 12-15 minute walk to Camden Yards.  Now, it’s on the other side of the Harbor.  Even after taking the water taxi across the Harbor, Google said it was a 25-minute walk.

From our front window, I could see the route I wanted to go. 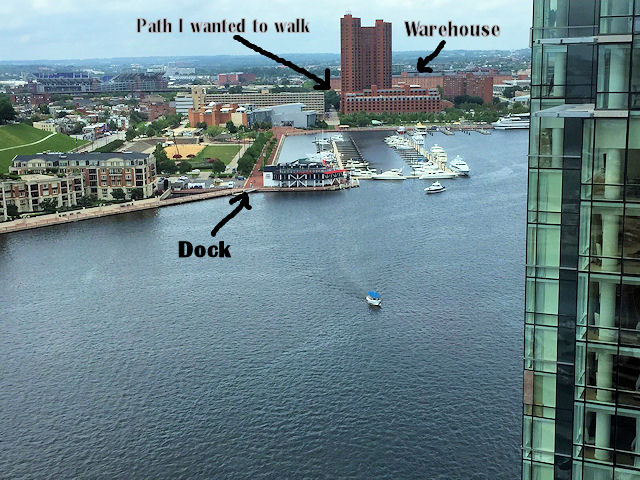 There’s the water taxi, pulling into the Harbor East dock.  All day, it runs from Harbor East to the Rusty Scupper and back.  You can see the Camden Yards Warehouse behind that tall building.  I figured I’d get off the boat and take a straight shot toward the ballpark.

Unfortunately, it’s a lot easier to solve a maze by looking down on it than it is from being within it.  Because as soon as I got off the water taxi, I strode off in the wrong direction from where I thought I was going, heading due south instead of west.

I was 10 minutes out and not seeing anything familiar before I decided to consult The Google to get me back on course.  And that, my friends, is how I deftly managed to turn a 25-minute walk into a 45-minute walk. 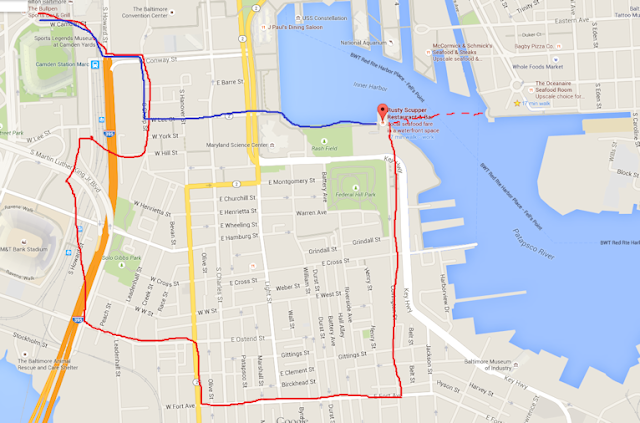 The map also includes my trying to cut through the parking lots of the Ratbirds’ Stadium, but it was all fenced in and I had to double back.

Luckily, my initial destination was The Bullpen, so I was in a place where I could replenish my fluids.  According to my iPhone, that was a 7.4-mile day.

But all was well.  It was a nice, cool night and I had front row, upper deck seats to watch the Orioles (lose). 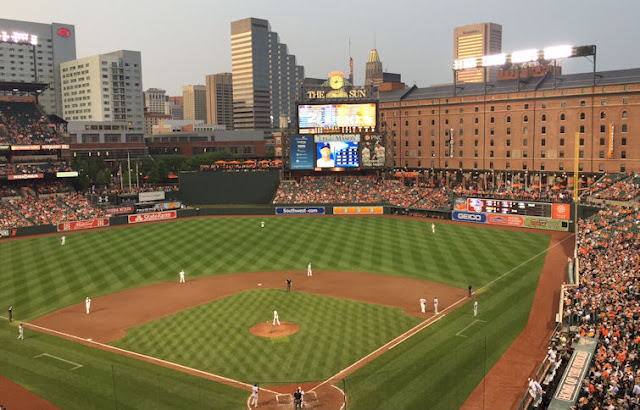 And speaking of the Yard, when I got home, I found my newest canvas had arrived.  The last piece of my decorating puzzle was a portrait of Camden Yards, to go on my hallway wall opposite my panorama canvas of PNC Park. 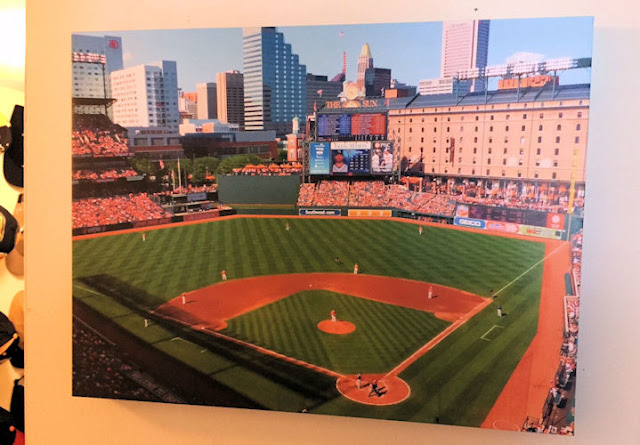 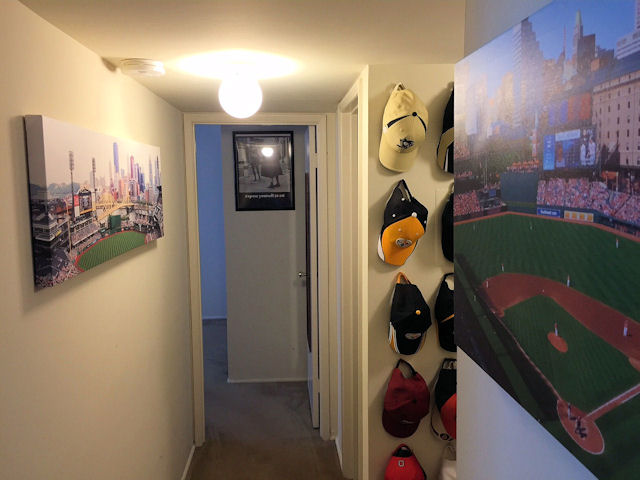 Shows the placement opposite PNC Park and the Hat Wall.

Friday’s big activity was going to see Terminator: Genisys.  I’ve always loved the Terminator movies, so I knew I had to see this one on opening weekend.  And despite the terrible reviews, I loved it.  It was exciting and funny and I was happy to be back in that world again.  Sure, it was kind of complicated, with multiple timelines in play, and the trailer already exposed the biggest plot twist, but it was an enjoyable couple of hours.

You have to give action movies a break… they’re not designed to make sense.  You just have to go with it.

Saturday was the Fourth, so my brother invited me to go with him and the family for dinner and fireworks at his club.  I had fun, with good eats and beer.  It was too bad that my nephew, Daniel, wasn’t there long.  He was more interested in walking around with his friends than sitting around with the grownups.  And I know that’s how it goes when you’re a 16-year old boy; you gotta be where the action is.  And prowl for babes.

Meanwhile, we had prime seats for the local fireworks… 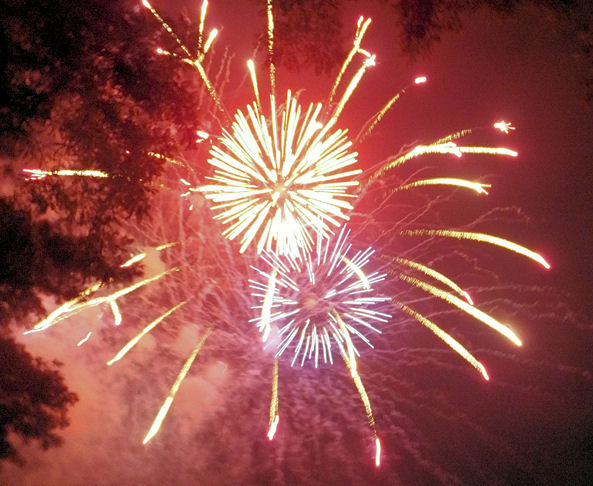 Sunday was my day of rest, (as if I had been particularly taxed the previous two days).  All I did was a little grocery shopping, then surfed a couple of cable movies before it was time for the World Cup Soccer finals.

I was so proud of our USA women’s team!  They sure removed any sense of game tension; jumping out to a 4-0 lead in the first half, before winning 5-2.  Pens fans, maybe they should sign Carli Lloyd to be a scoring winger for Sid.

Next Saturday I’ll be heading back to Ohio for my annual trip to see my buddies and their families.  Stay tuned for the exciting tales of old men sitting around, grilling stuff, playing music and drinking beer.
Posted by bluzdude at 7:20 PM