As a duly accredited Doctor of Mojo Arts, from the esteemed Jobu School of Mystic Juju, I put forth the following position paper on the practice of sports mojo.

I define “mojo” as the force that binds a team and its fans together.  It is the collective will of thousands of people, practicing their own rites and rituals, which provide an atmosphere of support and good will.  Good mojo can mean the difference between a successful play and disaster, and even the difference between winning and losing.  Or a field goal attempt hitting the goalpost, and either bouncing in or out from between the uprights.

Even professional athletes can falter when subjected to the best mojo practices.  What is commonly labeled as “the yips” may actually be a reaction to a stadium (or country) full of people engaged in the mojo arts.

The following are some general principles, honed under the most rigorous tracking, trial and error.  (Yes, we use Science and stuff, here at the Jobu School of Mystic Juju.)

1.  When wearing a game jersey, your first choice should be to as closely as possible, match whichever jersey your team is wearing.  If they lose, check for other variables.  Maybe you need a different hat or other accessory.

2.  Wearing the jersey of a current player is stronger mojo than that of a former player.  Jerseys of legendary players can also be powerful under the right circumstances. (Like if that player ever had a particularly good game against that opponent.)

3.  If you only have one jersey option, you’ll have to go by trial and error throughout the season.  Team t-shirts are an alternative strategy.

4.  You may want to consider what you wear earlier in the day, or on the last business day before the game, as a secondary mojo opportunity.  But you should take care not to wear the same gear as you intend to wear during the game.  Game gear should stand alone.

5.  Tchotchkes can be another secondary means of exercising good mojo.  These include team gnomes, ornaments, accessories, jewelry, etc.

6.  If your team has one predominant tchotchke, like a “Terrible Towel,” for example, that can be a powerful item.  For maximum effect, try varying the placement.  Start with it on your right knee, logo facing the action.  If this proves unsatisfactory, try the other knee during the next game.  Or display it nearby, hang it from your belt, wear it on your head...  Whatever works.

Note: Changing mojo strategies during the game almost never works, so don’t bother changing jerseys, sitting arrangements, or towel draping while the game is still on.  Wait until the next game to enact any changes.

7.  Never wear team championship apparel as outerwear, especially during the game.  In fact, never wear any championship gear at all, on game day.  To do so is to directly dare the mojo gods to smite your team.  The mojo gods hate presumption and expectation of a win.  One should remain humble before the mojo gods at all times. 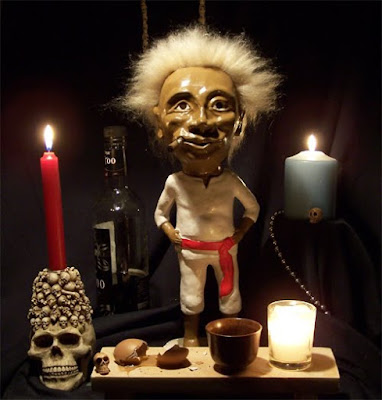 Don’t mess with Jobu’s rum, either.  Is very bad.

8.  Also, never speak of the anticipation or assumption of a win.  And during the playoffs, never, ever express a desire for one opponent over another.  The mojo gods will often grant your wish of a desired opponent, who will then smite your team’s ass all over the field (or rink, diamond or court).  Similarly, gloating after a win tempts the same fate.

9.  Mojo resets at the end of every season, so if something was bad luck one year, you can try it again the next.  However, if something proves to be bad mojo over multiple years, it’s a good idea to retire it.  Like this item: 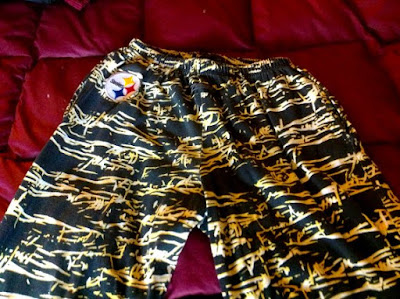 My team never won a game, ever, while I was wearing these pants.  Although that might have been more due to the gods of fashion, rather than the gods of mojo.

10.  This is the most important rule of all: good Mojo is whatever you believe it is.  For example, if you believe not washing your game socks is good mojo, then it is.  Personally, believe I shouldn’t be stinky, so I wash all my game gear as needed.  This also means that you may go against every rule listed above and still come out mojologically sound.  Consider these rules as starting points for your own personal mojourney.
Posted by bluzdude at 6:45 PM