Odd Bits - The Bulking Up Edition

I saw an article in the paper last week about how there’s a shortage of Flu Mist shots; you know, the flu shots they spray up your nose?  It said they have plenty of regular flu injection-type shots, but very little of the spray.

What really caught my eye, and subsequently pissed me off was how the article went on to say how some parents were preferring to let their kids go without flu inoculation rather than subjecting their little angels to an actual shot.

I know that no one likes getting jabbed with needles, least of all kids, but to let them risk getting the flu just to avoid a few minutes of unpleasantness?  Talk about misplaced priorities.

Listen, I got my share of shots as a kid, and I wasn’t given a choice about it. And yes, the first time or two, when I was 5 or 6, I screamed my little head off, too.  But then my parents did a little “parenting,” and solved the problem.  My mom bribed me into taking the shot like a big boy.

Mom promised me that if I didn’t cry, she would give me a little tchotchke I’d been wanting.  I think it was a little squeezy thing to keep coins in.  I’d had one but lost it. Mom offered me a new one if I didn’t scream and cry and carry on.

Mind you, I was still scared to death, but apparently greed held greater sway over me than fear.  So with my little lip quivering, I let the doctor give me my shot without making a peep.  And I found out that it really wasn’t that bad.  I mean, it didn’t tickle, but I’d had worse by just bumping into things, like the pointed-edged coffee table in our living room.  (Child-proofing hadn’t been invented yet, other than by yelling, “Hey, watch out for that table.”)

The important thing was that I learned that shots were doable, and I knew I could take them.  Being considered a Big Boy was important to me.  (Then.  Now, not so much.)  But this was a skill that I’d need because, in due time, I had to get an allergy shot every Sunday, after church, administered by Dr. Dad.  (Who, believe me, tolerated zero crying or carrying on.)

Eventually, we went on to having a whole different kind of post-church shot, but that wasn’t until about 10 years later.

Anyway, I think it does a disservice to kids to keep them from getting actual shots.  They’re going to have to get some eventually.  The last thing you want is for your grown children to be terrified of needles.  The screaming and crying get much less understandable.  The earlier they learn to cope with a little discomfort in service of the greater good, the better off they’ll be.

Also, they won’t go around spreading infectious diseases to everyone else.

And yes, I know, you think I’d feel differently if I actually had kids of my own, which is why I always characterize this kind of opinion as, “Advice from Another Childless Douche.”

Oh Christmas Tree
Speaking of, this weekend I was really wishing I had kids of my own… or at least knew where I could rent some.  I put up my Christmas tree on Friday and I probably did about 7000 deep knee-bends to decorate the bottom third of the tree.  So on Saturday and Sunday, my legs felt like they’d been on a Stairmaster for a straight week.

The result came out pretty well, though… 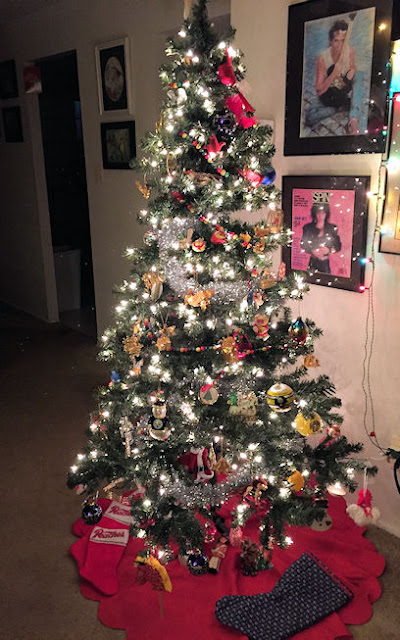 I plan to say more about the tree decorating process in the next post… unless I think of something better.

Example #709 of Why I Hate Maryland Drivers
Pulling up to a red light at a T-shaped intersection this weekend, I saw this numb-nut demonstrating a painfully familiar dick move. 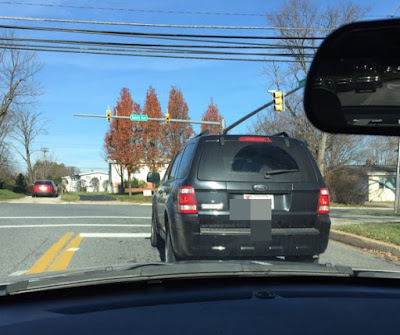 The guy in the SUV is making a left, but he’s planted smack-dab in the middle of the road.  There is plenty of room for two cars, side-by-side so that one can make a right if he wants.  But this asshole makes is making sure no one else can get by until he makes his left.

As you can see, I’m making a left as well, but I’m hugging the center line, so someone else can make a right if they need to.  If I was making the right, I probably would have given him the horn and maybe dramatic gesture.  (Think Carlton Fisk in Game 6 of the 1970-something World Series.)

I don’t know if it’s ignorance, indifference, or incompetence, but it’s all too common around here.

Bulking up
Last month, I got an offer for a free 90-day trial membership to BJ’s Wholesale and decided to give it a shot.

I’d always avoided wholesale clubs because really, I’m just a one-man operation.  I just don’t need that much of any one thing, and don’t have much room to put it.  But since it was free, I thought I’d check it out.

I’ve made two trips so far, and it’s pretty much what I thought.  Some good deals, others not so good… you really have to check.  But it’s been interesting.  But best of all, I saw something that made me crack up right in the giant aisle. 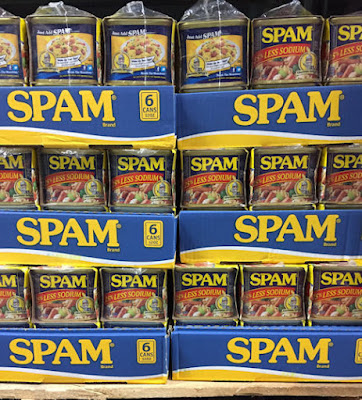 Some jokes just write themselves.

If you’re laughing, you’re probably a Monty Python fan and get the reference.  (If not, you might as well skip to the next segment.)

Right there in the store, I put the shot on Facebook, with the caption: #BloodyVikings.

I also had a thought that I should stick a can of baked beans in the middle, but then again, I was at BJ’s, so they only had them in cases.

And if you’re still wondering what I’m talking about, here’s the source material:

In Other News…
I saw this headline last month: 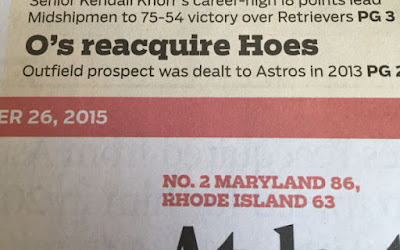 And I didn’t know they had any hoes in the first place, let alone need to reacquire them.  Guess it’s going to be an interesting season next year.  Can’t wait to see the new promotions.  The front office is going, “Maybe we can’t sign Chris Davis, but we can give them some hoes!”

A Gift Idea Whose Time has Come
Remember when I wrote about the salami-warmer Christmas ornament my Dad puts on the tree every year?  Looks like the idea has caught on.  I saw this in one of the gift catalogs that come flooding in this time of year. 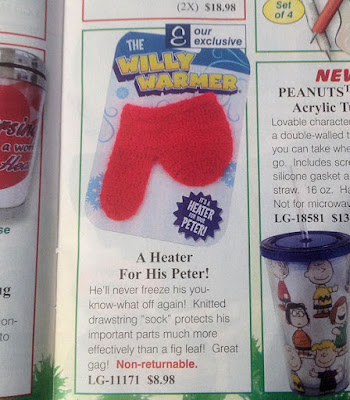 It cracks me up that it’s placed right beside the Peanuts tumbler set.  It fits, though.

Also… “Non-returnable.”  LOL… Yeah, I’d say that’s a “given.”  If underwear is generally non-returnable, the Peter Heater definitely is.
Posted by bluzdude at 9:03 PM