Enjoying the Fruits of One's Labor

I usually talk on the phone with my parents every weekend or two.  As you may recall, they retired to Florida just over 5 years ago.  We haven’t lived in the same town since 1986 so the calling habit is pretty ingrained.
When we spoke on Sunday, I received some very happy news.  My dad had finally been able to fulfill one of his lifelong dreams: to walk outside and pick an orange from his very own orange tree.  Seriously, I think that was the main reason they moved to Florida… that and the fact that no one has invented a tree that grows giant fish sandwiches.
OK, I make room for the fact that living with Green Bay’s 76,000 feet of snow every year might get a bit tiresome in one’s Golden Years.
It took quite a while to get to this point.  There were some false starts with tree plantings, and trees that never yielded anything but hard, green little nuggets.  (Remember, this was the guy that used his golf clubs as tomato stakes, just to amuse his next-door neighbor.)  And as I recall, he also has pear and fig trees planted, but I don’t think those efforts have borne fruit yet.
Finally, the day was at hand when Dad could begin the harvest of his crops! 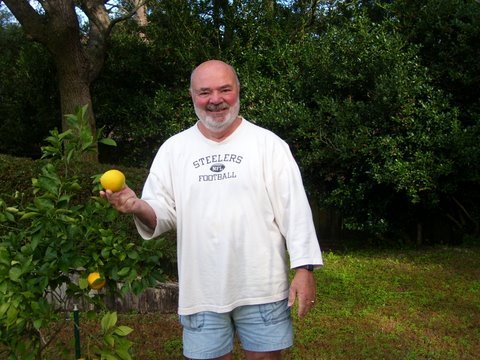 How cool is it to be able to pick fresh oranges in December?  Unfortunately it may be a while until he has enough for juice.  I predict that pretty soon, he’s not going to have a back yard at all; he’ll have a grove.  I don’t know what he’s going to do, though, once the trees get bigger than him.  (Which won’t take much!)
But the back yard wasn’t the only area of improvement.  I also learned about a new story.
Aside from orange trees, Dad always wanted palm trees too.  They house they bought came with 2 big sega palms, which were along the driveway.  Right beside the palms appeared this other plant.  Dad didn’t know what it was but it grew like crazy.  In fact, they took to decorating it with twinkle lights for Christmas.  Because it grew so quickly, Dad took to trying to shape it like a pine tree, to make it more Christmas tree-ish.  At one point, it grew to 12 feet tall. 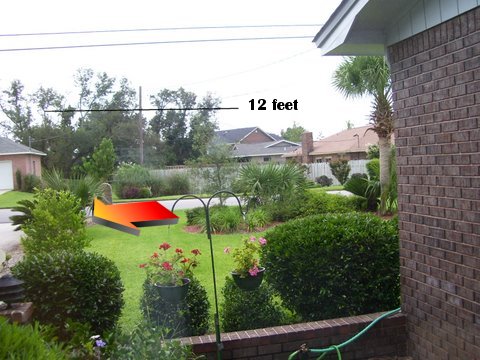 The arrow marks the plant in question, during its early days.  I’m approximating the 12’ mark to which it grew.
Eventually they asked a neighbor what the plant was and were shocked to find out that it was basically a weed.  And thus it became known as The Christmas Weed.  The neighbors (once again) must have thought they were nuts… Crazy Yanks.
Well, you can call it the Temporary Christmas Weed now, because Dad yanked it out of there last week and replaced it with something more traditional. 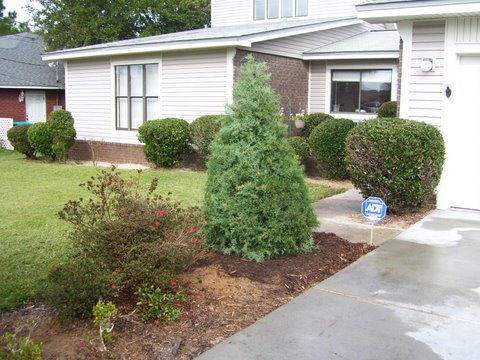 I don’t know what it is, but it’s conical and came from a nursery, so it must be an official plant.
While we were talking about the Christmas decorations, I asked if they’d put up my favorite of their ornaments this year.
I’ve mentioned in the past that our family’s ornaments tend to be a series of one-of-a-kind things, as opposed to boxes of the same bulbs.  We put up crazy quilt Christmas trees, not thematic statements.  And we tend to have some pretty weird stuff up there, like mini Jack Daniels bottles and lots of kid-art.  But one item takes the cake.
It was a gift from my dad’s friend Frank, aka “Frank the Lob.”  Dad and The Lob have a long history of gag-gifting each other, each more ridiculous than the next.  One year, The Lob sent Dad this: 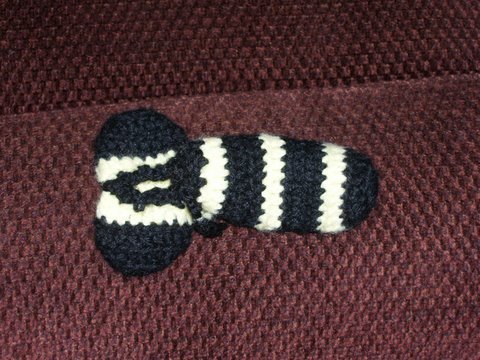 I present: the “B’jhonk” Warmer, thoughtfully knitted in Steelers colors.  It’s not stuffed or anything.  It’s made to “encase.”
I have no idea how to spell “bajhonk,” so I’m making an approximation.  That’s what Dad usually calls it.  It sounds like “ba-zhonk,” which is another term for… well… I think you can tell from looking at it.  It’s another word for “lob,” if you will.
Dad described it this way: “The Steeler Salami Warmer was a present to me from The Lob when we moved to Green Bay.  He thought it would help keep me warm, but it was way too small.  He said he thought it was the perfect size but that was a guess.  Anyway, from 1990 on, we have been putting it on our Christmas Tree and is “One of Our Favorite Things.”
If I know my parents, Dad probably puts it right up front on the tree, and once he goes back to watch football, Mom moves it around to the side.  Here’s a shot of it up on the tree: 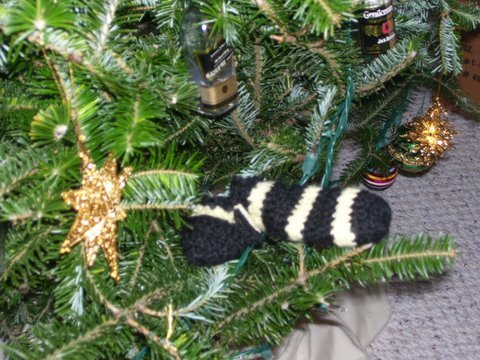 I’m not sure if they hang it there (snicker), or just slip it over one of the branches.  Talk about a little prick…  (Woooo!)
Dad has a bunch of crazy-assed stories about The Lob; at some point, I’m going to have to tell them.  It’s not like he’d mind… Who do you think sent me all the pictures to post?
Posted by bluzdude at 7:56 PM