Sorry I didn’t post last night… I was thrown off by a bathroom fan.  I probably should explain.

My apartment complex posted a sign on the door last week, saying that they would be sending over electricians on Thursday or Monday, to fiddle around with our outlets.  I wasn’t sure if they were here Thursday or not, but I realized they weren’t when they showed up about 5 minutes after I got out of bed on Monday.  (My office was closed for MLK Day.)

So, they had to shut the power down and get to their fiddling.  It was fine with me; I had my paper to read and the crossword puzzles to do, so I would be occupied.

About 45 minutes later, they packed up and left, presumably to another apartment in my building.  I looked around and didn’t see anything awry until I went into the bathroom.  When I flipped the light on, both the light and the fan came on.  There is a separate on/off switch for each… or at least there used to be.

At first, I thought maybe the made a mistake, but when I checked my other bathroom, it was the same way.  No way could that be a mistake.

It pissed me off because I don’t want the freakin’ fan going every time I go in the bathroom. There are only two activities in which I require the fan: using the can and taking a shower.  When I go to take a leak, or clip a fingernail, or take some medicine, or brush my teeth or get myself ready to leave the house, I don’t need the damned fan.

In the mornings, I’m trying to listen to the radio or TV while I’m in there.  The fan is essentially a big white noise generator, so I can’t hear anything else until I turn it off.

So I kept an eye out for when the electricians were done with the other apartments, and stopped them on their way out the door.  They told me they were instructed by apartment management to make that bathroom fan switch and there was nothing they could do about it.  They said, “Even though nobody likes it, we have to do it.”

I let them go because I know it wasn’t their call, but now I was seriously pissed, because before they left my place, I asked them what they were doing.  All they told me was that they had to “check the outlets that hadn’t been checked the last time,” whatever that means.  So that told me they purposefully omitted the whole bathroom fan switcheroo, no doubt hoping they could make a break for it before anyone noticed.

I’ve now been spending time considering what to do about it.  I’m pretty sure complaining to the landlord won’t do any good; they’ve already made a call and already know it’s unpopular with their tenants.  I do wonder why, though.  Is it a safety thing?  Are they trying to eliminate a growing mold problem?

Anyway, judging from how quickly they had it done, I’m betting it’s a really simple thing to undo.  I figure one could just take the wire off of one switch and attach it to the other.  Not that I’d try it myself, mind you.  But I have a friend whose husband is an electrician.  Maybe we can work something out.

Anyway, the whole thing kind of put me out of the writing mood yesterday, hence the Tuesday post.

The Dropping Like Flies Department
What the hell is going on with 2016 celebrity deaths?  Geez, they’re dropping like the temperature did last weekend.  I know these things are supposed to go in threes, but where do you start?  I’m counting five in the last two weeks.

First was Lemmy Kilmister, from Motorhead.  I was never a big Motorhead guy, but I understand that Lemmy was a hero to a certain generation of metalheads.  I like a song or two that he does, so I was mildly bummed.

(By the way, the name “Lemmy” comes from his penchant for saying, “Lemme a fiver, will ya?”  Or “Lemme a cigarette.”  The more you know…)

I never cared for Bowie at all.  As you know, I’ve always liked my music with a little more crunch to it.  Wasn’t into the glam thing at all.  And I never understood why he had to have all these personas.  I was like, “For fuck’s sake, pick a personality and stick to it, will ya?”

I remember when I was in college, his big comeback album “Let’s Dance” was inescapable.  I found it mildly tolerable but was still not a fan.  At least he gave Stevie Ray Vaughan a chance.  (I just didn’t know that at the time, of course.)

So I was pretty “Meh…” over Bowie.

But then we got word about Alan Rickman. 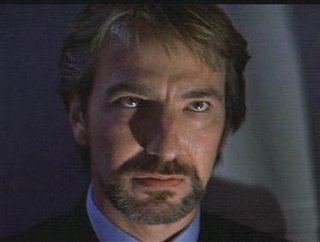 Rickman created the first villain I ever saw who was as compelling as the hero.  He was so slick in “Die Hard,” you almost wanted him to get away with it.  Did you know it was Rickman’s idea for him to wear a suit, as opposed to a “terrorist uniform?”  He said Hans might need to blend in with the hostages, which led to his sequence with the American accent.

Professor Snape, from “Harry Potter?”  Rickman did more with dramatic pauses than most actors can do with an Oscar-winning script.

One of his often overlooked roles was The Metatron, (aka the Voice of God) in Kevin Smith's "Dogma." He was unexpectedly hilarious in that role. (Granted, it's unexpected if all you knew of him at the time was his part in "Die Hard.")

Happy trails, Hans. I hope you're somewhere "sitting on a beach, earning 20%.”

I saw a quick notice that Dan Haggerty, who played “Grizzly Adams” on a TV show in the 70s, also passed away last week.  Again… “meh.”  I liked the show at the time, but that was so long ago, I barely remember it.  Or him.

And now, this weekend, Glenn Frey of the Eagles, passed away.

Now who would have ever thought Glenn Frey would fail to outlive Joe Walsh? 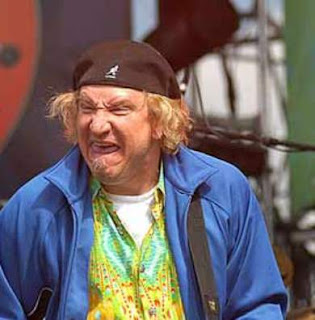 Yeah, it’s sad. The Eagles had a tremendous run of light rock classics.  They were a little light for my taste, but you couldn’t deny the talent and their harmonies were unreal.  My friend the Carpetbagger said that without Glenn Frey, there would not have been a “Beverly Hills Cop,” to which I added, “or Miami Vice.”

I saw Glenn Frey open for Tina Turner, back in the early 80s.  I had his first solo album, which was called: 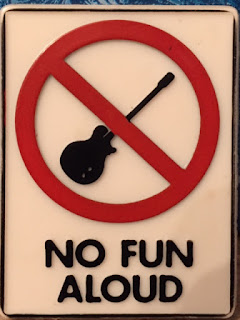 That’s a close-up shot of a promotional button from the record company.  (What? Of course I still have it.)

He had this song on it I liked, called “Partytown,” which had kind of a Chuck Berry vibe to it.

“I got sick of my job, sick of my life,
Sick of my future and sick of my wife.
I packed up the car and I got some gas.
Told everybody they could kiss my ass.

So… Lemmy, Bowie, Hans Gruber, and Glenn Frey are gone, but Keith Richards lives on.

There’s probably a lesson in there, somewhere.
Posted by bluzdude at 8:01 PM