Ticket to Ride, Ticket to Skate

Last weekend, for the first time in over 10 years, I got pulled over by a cop.  I was going through my neighborhood, revved up by AC/DC on the stereo, and wasn’t sufficiently focused on what I was doing.  I should have seen him up ahead, but my mind was already at the bar, which was my destination.

I was polite, I produced my license and registration (after some initial fumbling around, like trying not to show that I had my Bullpen VIP card in the picture window.) 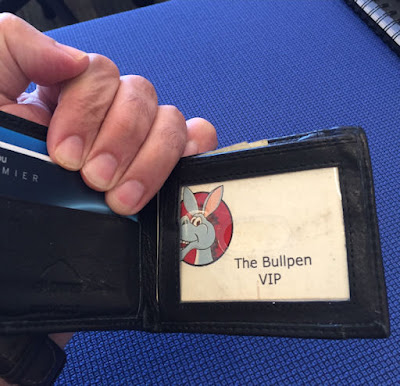 He asked how come I wasn’t wearing glasses.  I responded that I wear contact lenses.  (Drivers licenses should mention that, rather than just listing the driver uses corrective lenses.  I swear, even when you’re telling the truth, everything you say to a cop sounds like you’re lying.)

He asked me how my driving record was; I told him it was clean as a whistle.  I’d only ever been pulled over once, in the 18 years I’ve been in Baltimore.  My last ticket was from when I still lived in Albany NY, back in the mid-90s.  I knew he wouldn’t find anything serious.

It never crossed my mind that I could get into serious trouble.  I never worried that he might come back and tell me I looked like someone who had just robbed a house, or stole a car.  I never considered that he might want to look in my trunk or under my seat.  I forgot all about wanting to keep my hands in sight, lest he get jittery or trigger-happy.  I never worried about being cuffed, beaten or tased.

He was calm, polite; friendly even.  He joked around about the excuses he’s heard from people driving without their glasses.  Told me to “enjoy the rain” that was on the way.

I was an educated 50-something white male, driving a well-kept late-model car, so I reaped the benefit of the very definition of white privilege.  The other time I got pulled over in Baltimore?  (44 in a 30, I think.)  I got a warning that time too.

I don’t think I’ve ever had a situation where I had to deal with an unreasonable cop.  I mean, everything for which I’ve been pulled over, I was doing.  I acted polite and professional and so did the cop.

In fact, one time, the cop had to come back to my home later, to give me the ticket.  I was bringing a lawnmower from my in-law’s house back to our house in NY.  It was in the back hatch of my Honda CRX.  When I got pulled over for rolling a stop sign (which I almost always rolled, because there was so little traffic in the area), my registration was in the cubby behind the front seats, with the lawn mower on top of the cubby door.

I told the cop I couldn’t get at it just yet, but I lived a block or two up the road, so I could get it out up at my house.  He said to go and that he’d be right back.  I drove home, left the car out front and removed the lawn mower.  He showed up about 20 minutes later and gave me the ticket.  (I admit that I was hoping that something more important would come up and he wouldn’t show.)

But still, he pretty much cut me a break by not making me produce my papers right on the spot.  If I wasn’t a young (at the time) polite white guy, that might not have been the case.

Maybe I ran into a string of righteous cops who would have done the same for anyone.  Or, maybe one of those guys might have been the type to unnecessarily hassle black professors, ministers, politicians or business leaders, as has happened in the past.  I can’t know that… all I know is that I’ve never had a bad experience with the law.

Even that time the transit police set a trap for me because my plates were from out of state (for a year and a half).  Sure, they whacked me for $600 in fines and tickets, but they were never less than polite; jovial even.  And I certainly never feared for my safety.

Sure, maybe they’re just responding to my politeness and respect.  Of course, I’ve never had a reason not to be polite or respectful.   I’ve never been patted down just for standing somewhere or had my car searched after a routine traffic stop.

Wouldn’t it be nice if everyone had it like that?
Posted by bluzdude at 6:35 PM