A Shot in the Dark

(Technically, a couple hundred shots in the dark.)

My beloved Pittsburgh Penguins won their fourth Stanley Cup last night and believe me; I’m over the moon about it.

But it’s hard to be outwardly happy because the very same day, our nation suffered its largest mass shooting since the 1800s.  This is truly the story that just keeps going and going.

In this edition, an angry American Muslim shot up a gay night club in Orlando, killing 49 and wounding more than 50 others.  Conservatives don’t know whether to pray for their souls, dance a jig, or just say “I told you so,” like Trump did.

I’ve written about my views on our country’s gun problem a number of times, so I don’t have much new to add.  And neither does anyone else, apparently, because the story keeps repeating itself.

People wonder if this is finally the tipping point at which Congress will do something to address gun violence.  I would be shocked if it is.  If the wholesale slaughter of two classrooms full of 6-year-olds doesn’t get anything done, murdering a bunch of gay guys in a nightclub won’t move the needle so much as a millimeter.

Conservatives on internet comment sections are already bellyaching, “Next up, the libtards start asking for gun control…”

They’re right, of course, and then everyone will huff and puff and the right will claim the demolition of the 2nd Amendment and threaten armed assault as if some minor reform like enforcing a background check will spell the end of the republic. 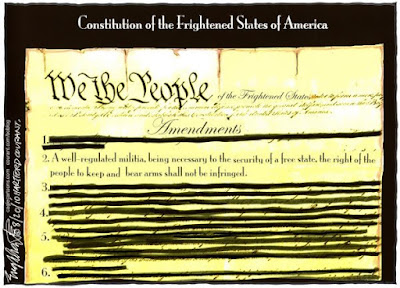 The Right only recognizes one solution to gun violence and that’s more guns.  (Because apparently they think the Die Hard movies were produced by (documentarian) Ken Burns.)  The GOP solution would be similar to the old government cheese program.  Granted, they’d want gun distribution limited to white Anglo-Saxon Christians, but that’s just a stray detail.

No one would be happier about that than the NRA, who you should remember is not concerned with hunting safety or gun training; they are the lobbying arm of the gun manufacturers.  They are only concerned with keeping the gun sales spigot wide open.

That’s why every attempt to bring accountability or common sense to gun laws is met with apocalyptic responses from the NRA.  Obama has been the best thing for business they could have ever asked for.  And they’re already using the same tactics on Hillary, who they also claim will come for your guns if elected.

Now, talk about hubris… The GOP is already trying to blame Obama for the Orlando shooting.  Seriously.  See, this guy was already known to the FBI, having been investigated for terrorist activity.

A little more than six months ago, Republicans shot down a bill requiring prospective gun buyers to be run up against the Terrorist Watch List.  Ponder the ramifications of that.  They actually think it’s more important not to infringe on the imagined purity of the 2nd Amendment than it is to keep guns out of the hands of known terrorists.  They are not allowed to board an airplane, but they have every right to buy any kind of gun they want.  The GOP literally do not care how many people get killed in this country, as long as they have unencumbered access to semi-automatic rifles.

That’s why nothing will ever change until people vote out the gun nuts and vote in people with the spine to stand up to the gun lobby.  (This is me over here, holding my breath.)

Anyway, my point is that if that Terrorist Watch List had specific ramifications, like preventing the sale of guns directly to someone who is apt to create mayhem, this guy might have been on it.  Instead, he went down to the store two weeks ago and bought a handgun and an assault rifle.  No questions asked.

And we wonder why nothing ever changes…

No, there is no legislation that will prevent all attacks all the time.  But maybe if we screened gun buyers better, or made it at least as involved as getting a driver’s license, it wouldn’t be so goddamned easy to kill so many people in so little time.