Saw another piece of conservative claptrap on Facebook this weekend.  In this episode, it’s merely a laundry list of half-truths and alleged offenses they endure, no doubt at the hands of we godless, hippy, freedom-hating progressives. 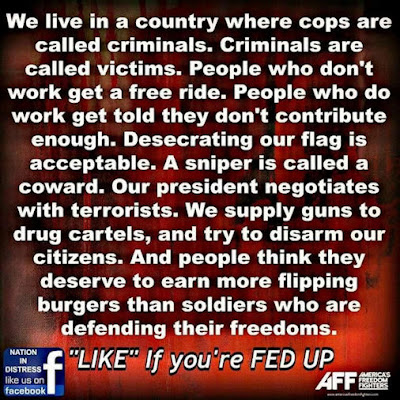 Let’s go through this point by point, OK?  Granted, I could probably do a full rebuttal post on each point so I’ll try to keep it brief.

We live in a country where cops are called criminals.  Cops are called criminals when they murder the people on the street, are seen on video planting or tampering with evidence and falsifying the arrest report.  Sometimes the shoe fits.  No rational person is condemning all cops.  Nor should all cops receive blanket indemnity.

Criminals are called victims.  Yes, when they have the misfortune of running into cops from the prior point.

People who don’t work get a free ride.  What free ride?  Unemployment proceeds are temporary.  The Welfare Reform Act of 1996 requires welfare recipients to actively seek work and provide proof.  And they’re certainly not making so much that they get to sit back, relax and live the good life.  It basically keeps them from starving to death.

Conservatives found a receipt once that indicated food stamps were used to buy high-quality protein once, so they naturally assume that the millions of SNAP users are living like King Louis XIV.  Republicans are only in favor of charity when it involves something they wouldn’t want for themselves.

This is not to say there is no abuse of the system, be it for the SNAP program, welfare, or social security benefits.  There will always be people who try to abuse the system for their own benefit.  (Like hedge fund managers, but not as lucratively.)  I think there should be a robust department to sniff out and persecute welfare fraud.

Meanwhile, there are millions of people who are just barely making it.  Receiving some kind of public benefit means the difference between hanging on by one’s fingernails and being out on the street begging for change.  Or burglarizing your house.

People who do work get told they don’t contribute enough.  I don’t even know what that’s supposed to mean.  “Get told by” whom and “don’t contribute enough” what?  To me, Mitt Romney calling 47% of the country “takers” comes to mind, but I don’t think that’s what the writer is getting at. This looks to me like it was added merely for visual heft.

Desecrating our flag is acceptable.  I don’t think the predominant feeling in this country is that flag burning is acceptable, but it does fall under free speech.  Regardless of what anyone does to our flag, our country maintains her values, one of which is the First Amendment.  Our soldiers didn’t die for a flag; they died for our country, which is still here.  For a group that thinks we should all have semi-automatic weaponry and shoot anyone who appears vaguely menacing, conservatives sure are a sensitive lot when it comes to a piece of cloth.

I’m sorry if I can’t get all worked up over it.  As George Carlin once said, “The flag is a symbol, and I leave symbols to the symbol-minded.”

A sniper is called a coward.  Only one time by Michael Moore and conservatives don’t listen to him anyway.  Of course, they still have to take him out of context to make their point.  (In a tweet, Moore was talking about the Japanese sniper who killed his uncle during WWII.)  But why let a bit of clarity ruin the narrative?

Our president negotiates with terrorists. You mean when Reagan sold arms to the Iranians while they had our hostages?  Like that?  Oh right, they probably mean the president with the foreign-sounding name.

Look, you can’t engage with anyone in the Middle East without someone thinking they’re terrorists.  It’s a matter of semantics and whose side you’re on at any given time.  The bottom line is that nothing will ever change without dialogue or negotiation.  That’s world politics.  Granted, it’s easier to sit at the bar and advocate bombing the whole area, but it’s not exactly the kind of strategy that’s worthy of an “exceptional” country like ours.

We supply guns to drug cartels, and try to disarm our citizens.  Mixed bag here… one half-truth and one complete distortion.  “We supply guns to drug cartels…” was part of a federal sting operation, wherein the feds would follow the guns, infiltrate the gangs and bust the whole thing up.  Apparently it didn’t work very well, but it’s hardly the basis of a claim meant to make it look like it’s a large-scale philosophy.

“…and try to disarm citizens.”  Complete falsehood.  That’s just the stock NRA claim anytime there’s an effort to strengthen background checks or prevent known terrorists from obtaining semi-automatic weaponry.  There has been no credible effort to actively remove guns from any US citizen during the last seven years; that’s just the favored nightmare scenario put forth by gun lobbyists to scare their gun-fetish loyalists into submission.

And people think they deserve to earn more flipping burgers than soldiers who are defending their freedoms.  Again, we have two separate areas here, each with its own dishonest angle.

“And people think they deserve to earn more (for) flipping burgers…”  That’s the common slant for talking about the minimum wage… flipping burgers.  They should also mention every other retail worker, phone center operator, day care worker, or other non-trade, non-unionized employee.  Minimum wage is not just for teenagers; people have to make a living on minimum wage.  It was never meant to apply only to youngsters.

President Roosevelt, who brought the minimum wage into existence, said, “no business which depends for existence on paying less than living wages to its workers has any right to continue in this country.

We also have to keep in mind that before 2007, the minimum wage had stagnated for 10 years while the cost of living continued to soar.  It only makes sense that a correction be made.  Perhaps if the GOP had allowed cost of living increases to the minimum wage along the way, instead of playing it cheap, it wouldn’t be such a big jump coming due right now.

“…than soldiers who are defending our freedoms.”  I agree that soldiers should be paid more than minimum wage and I’m not sure that they don’t.  I think this may be an apples to oranges comparison.  Think of all the things that our military people don’t have to buy for themselves… food, clothes, lodging, health care, basic necessities.  I mean I’m sure there are variables here and I’m no expert, but if you join the military, they take care of you.  Other than odds and ends, you can bank your paycheck for later.  Plus you get a free college education if you want it.

Yes, I know there can be other things to pay for but they compare very favorably against all the things civilians must buy with their measly minimum wage paycheck.

But say we do want to raise the soldier’s paycheck… where do you think that’s going to come from?  Will Republicans go along with a raise in taxes?  Hell no.  They’ll use military pay as a club against a higher minimum wage, but it’s not like they’re interested in any military spending that can’t be sent to their defense contractor sponsors.

Also, the “defending our freedoms” part?  I call bullshit.  Other than Afghanistan, the last time our military defended our freedoms was WWII.  In every case since then, it was a matter of projecting political power or the forced acquisition of our enemy’s resources.  So spare me the weepy paean to defending our freedom.  Those days are long gone.

No, I do not “Like.”  I’m fed up all right, but it’s with these half-assed semantic games, cockeyed assertions, misdirection and godlike worship of our armed forces.  And that’s what passes for deep thinking from the right.