I saw today that after the highly publicized interview between the FBI and Hillary Clinton, the Feds recommended that no charges be filed.  The FBI director said, “Although there is evidence of potential violations of the statutes regarding the handling of classified information, our judgment is that no reasonable prosecutor would bring such a case.”

That doesn’t mean the Justice Department can’t still file charges, but the US Attorney General had previously said the department will take its cues from the FBI investigation.

Naturally, there was an instant hissy fit on the part of the Republicans, who have been beating this particular drum for years now.  I found this circulating from the right-wingnut Breitbart group within minutes of the announcement. 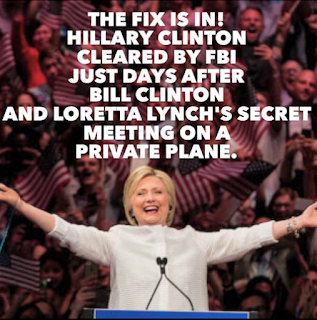 I’m guessing they already had this one loaded in the chamber.

It’s obvious that they don’t like it when an investigation doesn’t form a conclusion until after it’s done investigating.  They’re used to doing it the other way around.

See, the Republicans have to carry on like this.  They’ve spent years now working the Benghazi angle… nine Congressional investigations now, right?  And they’ve come up with nothing except this.  Private email servers.

Granted, they’ve gotten an impeachment with far less and they know it.  They’re doing to Hillary Clinton exactly what they did to her husband.  Remember the Whitewater hearings?  They spent a fortune in taxpayer money in the 90s to investigate what they claimed to be a shady real estate deal which benefitted the Clintons.  They didn’t find jack shit that they could use… until it leaked that the president got a hummer from some intern.

Then it became all about the sanctity of the presidency.  (Obviously, they stopped being concerned about presidential image around January of 2009.)  They managed to gin up enough dewy-eyed outrage to pass some articles of impeachment.  Not that it made any real difference, mind you.  Bill Clinton remained the president, but they were able to tie up the administration in depositions and red tape until they couldn’t accomplish anything else.  Which was exactly what the Republicans wanted.

Now they’re doing the exact same thing to Hillary.  I’ve never once heard a plausible reason why the incident at Benghazi was so different from the dozen or so fatal attacks on US embassies and consulates under the Bush administration.  Other than there being a Democrat in office, of course.

Taking the shot at Obama wasn’t even the point, though.  This was the chance to put some pre-emptive stink on the presumptive Democratic front-runner for 2016, so every time their “investigation” didn’t turn up anything tangible, they just started another one.  The goal was purely and simply to keep the words “Clinton” and “scandal” in the same headline.  (Usually a Fox “News” headline.  Respectable news organizations didn’t give this story much oxygen and declined to participate in the charade.)

These investigations were 100% political in nature.  One of their own people even admitted it, in an accidental fit of honesty.  House majority leader Kevin McCarthey shot his mouth off on Fox “News,” saying the committee had achieved its goal of damaging Clinton’s poll numbers.  Fox anchors themselves admitted to the political nature of the investigations, with the alibi that every investigation is political.

They’re really in a win/win situation here.  If all the investigations came back with something, that’s their campaign material for the election.  Now that there was no relevant finding, they cry “fix,” and insinuate corruption.  Either way, it keeps a Democratic “scandal” in the headlines.

Personally, I think the scandal was when prior to the Benghazi attack, the Republicans twice refused requests for more funds to bolster embassy security.  Somehow that didn’t make it into the Republican report.  Go figure.

I didn’t care about the first Clinton scandal and I don’t care about this one.  No one can show me any damage done to the country over either.  Regarding the Clinton administration, if a president can produce an economy that purrs along enough to create a surplus, flush with jobs, then hummers should be a perk of the job.  I honestly don’t care about politicians’ personal lives until they affect the rest of the country.

As for the emails, yeah, it wasn’t the best information management procedure.  Secret information was at risk.  But ultimately, what happened?  Nothing.

If I had a history with political rivals like the Clintons do, I wouldn’t want my personal emails on a public server either.  We have information security procedures where I work too.  If I did what she did, I doubt I’d be fired… not unless critical information fell into rival hands.  I’d probably get written up and admonished not to do it again

That’s what’s probably going to happen to Hillary.  She got reprimanded and now she won’t do that again.  It wasn’t the best judgment, but I understand it.

If they want to attack her tenure as Secretary of State, then focus on something tangible.  I suspect if there was anything there to attack, they’d be doing it.  So instead, they dwell on minutia, because that’s what one does when unable to argue legitimate issues on merit.

And anyone who supports Donald Trump should not be allowed to call anyone else a liar, ever, not until they call out their guy first. 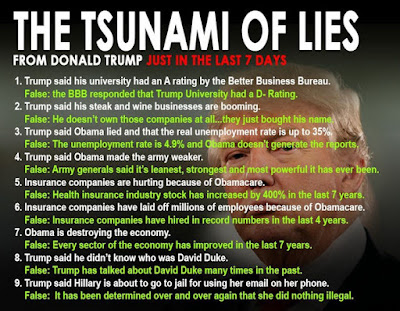 And these aren’t even the recent ones.  This graphic is from March.

I’m over it, as should everyone be who wants to see something accomplished in this country, for the benefit of the 99%.