If you’ve been around here long, you know I have a thing for game jerseys.  I religiously track my jersey-wearing as it relates to my team’s won/lost record as I try to determine the best mojo.  Because it wouldn’t be much of a challenge if I only had one or two jerseys to choose from, I tend to have a steady influx of new jerseys to try out.

And because I am not filthy rich, I can’t afford to spend $300 a pop on sports jerseys, so I usually go through one of those “cheap jersey” websites, featuring unlicensed wares from the finest sweatshops of the Far East.

As I’ve documented before, it’s hit and miss as far as the quality goes.  But you have to know that going in.  That’s why they’re not $300.

So periodically, when I’m down at the sports bar, a friend or acquaintance will ask me where I get my jerseys, and when I tell them, they ask if I can get one for them.  I’m usually happy to help, as long as I know how to find them when the bill is due.  But I’m happy to front the money via credit card, and reap the points.

At the end of the last football season, I had a couple people ask me to get them a jersey.  I said I’d probably do my next order in the fall, right before the new football and hockey seasons start.  One guy wanted a Washington Capitals hockey jersey and another guy wanted a Ravens jersey.

Now, normally I’d want nothing to do with outfitting more purple maniacs, but they’ve made me feel at home at this particular bar and I felt it best to be helpful and appreciative, so I agreed.  I placed the order a couple weeks ago and included a couple of things for myself.

The jerseys came in this week and the first one I saw was a problem.  I’d ordered a white #48 Bud Dupree jersey for myself and while the “48” part was fine, it was another detail that was amiss. 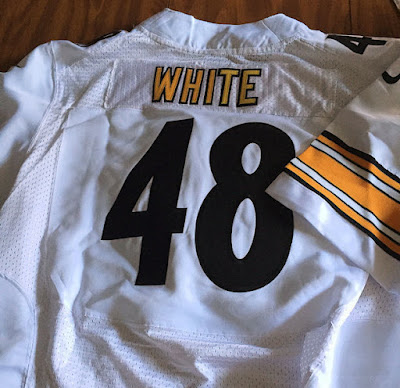 The guy’s name is Dupree, not White.

Well, there’s nothing I can do with this jersey, short of taking it to a sports apparel place and having a new name or number put on it, which would cost more than the jersey did in the first place.  But I certainly can’t wear it like that.  Who knows what kind of mojo disturbance such a thing could cause?

I kept going through the jerseys… the two hockey jerseys were OK, then I got to the Ravens jersey.  Name and number were fine, but they sent me a Youth Large instead of a Men’s Large.
(Flacco pic) 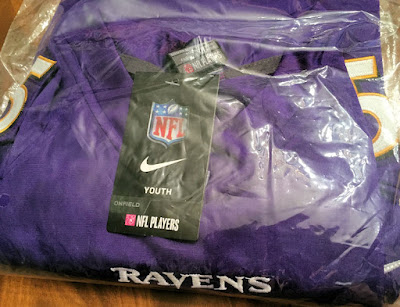 Very few “Youths” hang out with me at the sports bar.

So now I had to start emailing with the sweatshop people, which is aggravating.  You know how American retailers almost always correct their own mistakes?  Not so much with these guys.  Their solution was for me to send them another $10 and keep the Youth jersey, and they’d send me replacements.

I lobbied for them to send me a pre-paid return sticker but that didn’t go over too well.  Ultimately, I really didn’t have much choice.  I was already into them for about $160 and only got half the jerseys I needed. They just better make sure they send the right ones this time.  I can live with shoddy stitching or an off-center patch, but the name and size have to be right.

Back in the 90s, while spending a long weekend in New York City, I went to the Warner Brothers store, where I picked up a Bugs Bunny drink stirrer.  The stirrer was glass, with a gold Bugs head on top.  I loved that thing and used it all the time.

Flash forward about 15 years and I find myself making more drinks that I need to stir, and wishing I still had my Bugs stirrer.  Lately, I’ve taken to putting a couple of maraschino cherries in my whiskey on the rocks, with a splash of the juice.  My Grandpa D used to give us kids maraschinos in our “drinks,” and I kind of missed them.  So now I add the cherries to honor my Grandpa (and because they’re yummy.)  There were two “C’s” in his family name, so I add two cherries.

A nice stirrer would come in handy because I was getting tired of using my finger.  I mean what if I had guests over for drinks?  I only have so many fingers. 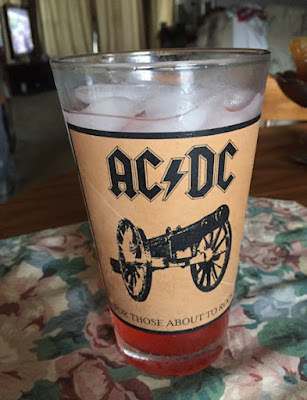 In a long overdue moment of clarity, I decided to find another Bug Bunny stirrer online. I checked Amazon, E-Bay, whatever, but I couldn’t find one.  I found a few pictures where I thought I had a match, but they were for items that had already been sold.

Anyway, I figured if I couldn’t find Bugs, I’d see what else there was.  I couldn’t find anything else quite as kitschy, but I did find a nice set with red glass shapes on top.  I have a lot of red in my kitchen so I think they’ll be nice.

Because I’ll want them nearby when I’m at my drink-making station, I thought I’d put them in a small decorative vase.  Only problem was that they went almost all the way into the vase and didn’t look very decorative at all.

I solved that problem by ordering a package of glossy red rocks to put in the bottom of the vase.  (I actually wanted glass pebbles or marbles, but couldn’t find a package of less than a pound, and I only needed so many.)

It’s weird… I don’t know if these are the actions of a grownup or a bored housewife (or househusband).  Next thing you know, I’ll be trolling through Etsy, looking for matching stemware. 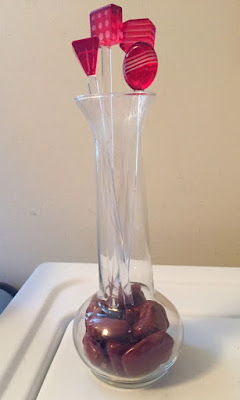 Eat your heart out, Martha Stewart.

I’ve been going to an awful lot of Orioles games this summer, I just haven’t been writing about them here.  Been to 23 so far, which is a new personal record.  But last Friday I saw the best game of the year and I have to tell you about it.

I had seats in the 3rd row, just past 1st base, which was a good spot from which to take pictures, so I brought the good camera. (Instead of just using the phone.)

Right off the bat, the Orioles gave up two 2-run homers in the first two innings, go fall behind 4-0.  Solo homers by Pedro Alvarez and Chris Davis made it 4-2 midway through the game. 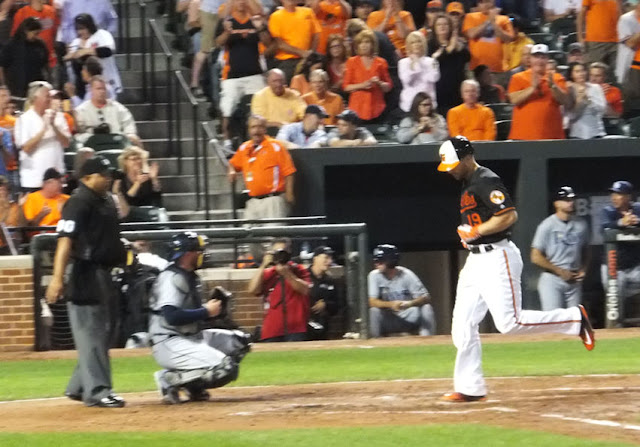 Crush Davis crosses the plate after bombing one.

Seventh inning, O’s load the bases and first-year Korean player Hyun Soo Kim crushes one over the centerfield wall.  Unfortunately, the center fielder leaped up two feet over the top of the wall to knock it back into play.  Instead of a grand slam, only one run scored.  But still, the place was rockin’.

The comeback continued into the 8th inning when the O’s scratched out two more runs to take the lead.  Top of the 9th, they sent in the closer, Zach Britton, who has not blown a save all year.  He got an out and then gave up a fly ball to deep right.  It was caught on the warning track, but not before giving a heart attack to the hometown crowd.

With two outs, the next batter hit a grounder up the middle, but before the second baseman could make a play on it, the ball ricocheted off the base, putting the tying run on first.  Next batter laces a shot into the left field corner.

The outfielder hit the cutoff man with the throw, who then spun and threw the runner out at the plate.  Game over.

It was one hell of a ride and a great ending.  Plus, I got these socks. 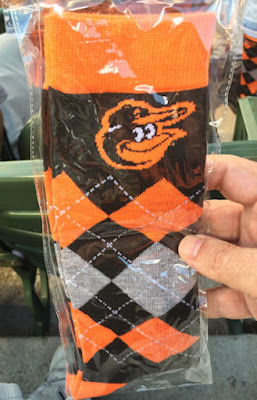 My only problem is I can’t decide whether I should wear these with my charcoal suit or the gray one.  You can wear argyle with pinstripes, right?
Posted by bluzdude at 8:03 PM