A Tale of Two Stories

Even people who don’t follow football know who this guy is now, and probably have an opinion about him.  Colin Kaepernick is the player for the San Francisco 49ers who decided he will no longer stand during the National Anthem any longer, to protest the treatment of minorities in this country.  And people have lost their minds over it.

The usual battery of old white people and life-long military apologists and police fetishists have gone ape-shit over this display of disrespect to the nation.  (Translation: to the nation’s white overlords.) 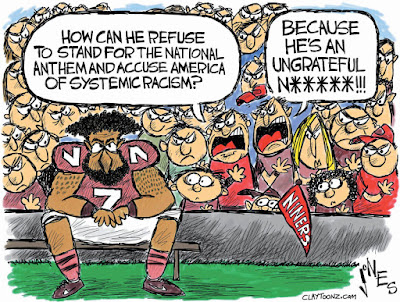 I’m pretty sure if any of the people loudly taking offense were ever treated the way minorities get treated in this country, the place would be in flames by now.  It’s funny how so many people have opinions about how much crap other people should take, and how they should be allowed to react to it.

Remember the riots?  Yeah, everyone was like, “That’s no way to register complaints and induce change.  You have to do it peacefully.”

Now you have a guy basically just sitting down or taking a knee, and they don’t like that either.

There have been several main avenues of hostility.  One is that he’s not really black, he’s biracial.  (Biracial just means a person has to take shit from two races.)  Another is that he’s been privileged; raised by white adoptive parents, sent to good schools, and now makes big bucks playing football.  So where does he get off complaining?

I’ll tell you why… empathy.  And that’s why there’s a disconnect.  Conservatives don’t really empathize with anyone.  They don’t understand the selfless protest.  The only other persons’ shoes they can see themselves walking in are those experiencing “reverse discrimination.”

It’s always “Lower MY taxes.  Worship MY God, in the manner with which I am comfortable.  Have that baby because of MY beliefs.  Not in MY backyard.  And no one ever gets to receive a benefit that I don’t get too.”  The concept of “common good,” is just another name for Communism.

Now, what do I think about this story?  Like all rational people, I support the right that every citizen has to protest, regardless of their socio-economic status.  My only observation is that maybe he could have found a more efficient outlet, because by picking this particular mountain to die on, the means overshadows the substance.  No one is talking about why; they’re too busy complaining about how.  That’s not effective communication.

I also think he should have defined his terms better.  I mean, what are the criteria for ending the protest?  Solving poverty and race relations nationwide?  That’s kind of a tall order.  He’ll be protesting for the rest of his days.

So I basically give him credit for taking a stand, at great personal expense, regarding an issue larger than his own self-interest.  But I think he might have been more effective via another route.

Meanwhile, on the opposite side of the country, the Supreme Court upheld a lower Federal Court ruling maintaining that the new voting law in North Carolina was unconstitutional and ordered it scrapped.  It was a 4-4 tie which by default, upheld the lower court ruling.

The issue here was that the Federal Court found that the legislators purposefully created the law to reduce minority voter turnout, noting that it was done with “surgical precision.”

That’s no joke.  They had emails in evidence, showing lawmakers requesting data on minority voting patterns and what IDs they most often used, and then used that data to create a law to have the greatest impact on that target.  They disallowed certain IDs, closed particular voting areas, reduced early voting and eliminated on-site registration and cross-precinct voting.

There is no plausible way that any of this was done to prevent voter fraud.  The only fraud was this “monster law,” requested, designed and implemented to keep prospective Democrats from voting. 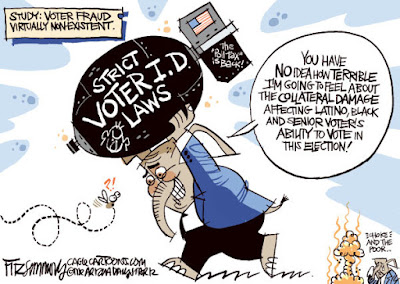 And STILL, the lawmakers involved swear that it’s all about preventing voter impersonation.  They said they requested the racial data so they could better protect minority voters.  Seriously.  That’s like the fox saying he’s saving the chickens from the farmer, by eating them himself.

North Carolina is exactly why the Civil Rights Act of 1964 was necessary.  And it’s no accident that as soon as the South came off “probation,” where the Feds no longer had to clear any changes to voting laws, this monstrosity was unleashed.  In fact, they had it ready to move through the legislature, but held it back until the Supreme Court decision was announced, that gutted the Civil Rights Act.  They knew it wouldn’t pass that kind of muster, but then they overshot and made the racism so blatant, it couldn’t be overlooked.

Well, it WAS overlooked by the four Republican-appointed justices.  That’s another crying shame.  How is it possible that four of our highest judicial officials thought it was perfectly fine to research and develop ways to keep minorities from voting?  The evidence, smoking guns and all, were right there in the case files.

The Supreme Court matters.  It’s the last line of defense against the dark arts of systematic, legislated discrimination.  If Trump wins, we can look forward to another decade of the Supreme Court allowing the rich to step all over the rest of us.

And THAT is why guys like Colin Kaepernick should be protesting.