Once again, President 45 has isolated our country from the rest of the civilized (and even the UN-civilized) world but moving to pull out of the Paris accord to fight climate change.  Every country in the entire world, including North Korea, all the crooked South American regimes, all the oil-ocracies in the Middle East, all the crazy warlord-ridden African nations, all of them except Syria and Nicaragua, have signed onto the accord.

Sources say that one of the reasons he pulled out is to seek revenge on the European countries who didn’t sufficiently kiss his ass last week during the G7 meetings, especially France, whose new boy-leader dared to engage in a handshake-as-bigger-dick contest with him.  Apparently, Marcon had advanced warning about Trump’s inclination to use handshakes from world leaders a means to express his own dominance, by pulling them toward him as the other man is letting go.  So French guy beat Trump at his own game and now he’s so butt-stung, he’s delivering a giant F-U to Europe, the world, and anyone else who doesn’t want to see the world turn into a Martian landscape.

Personally, I don’t think that was an over-riding reason Trump pulled out… I think it’s more like the gravy.  You know, it’s a small added bonus to stick it to some people who didn’t suck up enough, especially not compared to the Saudis.  The Middle East portion of his trip featured massive ego stroking.  You have to hand it to those dictatorial autocracies; they really know how to spit-shine an ego.  And all they got in return was a massive arms deal.

So now our “leader” is praising ruthless royal families and nutso dictators while insulting and quarreling with our most faithful allies.

There it is… Isolationism: The Millennial Edition

Now, I’m not going to get into the facts and figures, hypotheses and counter-hypotheses of climate change.  To everyone in the civilized world, except Republicans, the science is clear.

The thing that made it clear for me is the graphic on this link.  Here, it shows the progression of average global temperature from 20,000 BC until today.  When climate critics claim that we’re just undergoing a natural cycle, like the planet has experienced before, you can see how full of shit they are.  These “cycles” are gradual increases and decreases that played out over thousands of years.  Nowhere in history has there ever been a jump in temperatures like we’ve experienced in the last 100 years. Or even the last 16.

But because Republicans are bought and paid for by the fossil fuel industry, they are forced to call the sky green and the grass blue and throw as much crap at the wall as possible to refute accepted scientific findings.  All because big business doesn’t want to spend money on anything that doesn’t positively impact their bottom line in the next quarter. 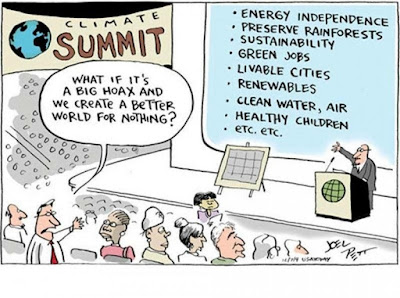 It doesn’t matter if the planet burns up, or the coastline moves miles inland, they must protect their stockholders, right.  (And by extension, the executives whose bonuses are tied to profits and stock price.)  Granted, they may have been swept out to sea but more stock for the rest!

London Bridges
After yet another terrorist attack in London, our tweet-happy president took the opportunity to politicize another country’s tragedy by applying our country’s politics to it.

First, he took the London mayor’s “Don’t be alarmed” comment completely out of context, you know, the way Fox “News” does every day.

At least 7 dead and 48 wounded in terror attack and Mayor of London says there is "no reason to be alarmed!"
— Donald J. Trump (@realDonaldTrump) June 4, 2017

The actual quote from the mayor: “Londoners will see an increased police presence today and over the course of the next few days,” Khan said on BBC. “No reason to be alarmed.”

See, this is why Fox “News” and the Republicans who fall in with them are frauds.  The “No reason to be alarmed” part was about a separate subject, the police presence, not the likelihood of further attacks.

Trump knew the difference… they all know the difference, but they don’t care.  He knows his base will believe him without question and an even greater number won’t read any further than the headlines or the lone tweet.  So he gets to reinforce his prejudicial viewpoint, the truth be damned.

And if you’ve paid attention over the last year, “truth” is irrelevant in conservative politics.

Do you notice we are not having a gun debate right now? That's because they used knives and a truck!
— Donald J. Trump (@realDonaldTrump) June 4, 2017

Maybe he’s right about this one because we SHOULD be having a gun debate, even though the terrorists didn’t use guns.  Because there’s a reason for that!

Seven people died in the London Bridge incident, which is tragic, but you can bet the death toll would have been much higher if guns were as easy to obtain in England as they are in the US.

There were reports of one guy fending off the terrorists by throwing a restaurant table and chair at them.  Think that’s going to happen if the bad guys were wielding semi-automatic weapons rather than cutlery?

If they had guns, they could have mowed down dozens in mere seconds.  Knives and motor vehicles aren’t nearly as efficient.  So no, the argument is not to ban knives and trucks, like conservatives pretend liberals should want to do; it’s to double the efforts to remove access to semi-automatic rifles.

Seven families have to grieve for their loved ones, taken too soon and that’s terrible.  But that’s better than dozens of families… or hundreds.

It’s plain and simple: England’s restrictive gun policy saved lives.  But better we have all that “freedom,” to offset our massive death toll, right?