You’ll notice that I give Fox “News” a lot of crap.  Believe me, it’s well earned.  They are not an outlet for anything resembling “journalism,” and what they broadcast can only be considered “news” in the broadest sense.

What they are is a mouthpiece for conservative talking points; nothing more and nothing less.

And really, their philosophies are malleable.  As soon as a Democrat adopts one of their points of view, they change it so that they are still in opposition to progressives.  (Remember that the idea behind Obamacare came from the GOP congress in the early 90s.  Mitt Romney, himself, instituted it in Massachusetts.  But as soon as the Democrats adopted the idea, it became a liberal, socialist scam.

There are only two kinds of stories you’ll see on Fox “News,” or read on their websites:
·        Those that promote Republicans or a conservative agenda
·        And those that criticize Democrats and highlight apparent failures of a progressive agenda.

It doesn’t matter what else is going on; if they can’t label it as one of the two of these, they ignore it or only cover select aspects.

And this is because Fox exists for only two reasons:
·        Creating new Republicans
·        Engaging, enraging and maintaining current Republicans.

Take a hurricane, for example.  Most networks will run stories about the devastation, heroic efforts to save people, or government efforts to address the crisis.

Watch Fox and you’re guaranteed to see outraged reports on the looting, usually black people.  That’s the part that plays to their base.  Every time Fox viewers see black crime, it translates to “Freakin’ Democrats…”

Look at last Thursday night. While other news channels were covering the Grand Jury being convened to investigate Donny Jr.’s date with the Russians, Fox was busy covering… well, pretty much anything BUT that.

As I was considering this situation, I began to wonder how Fox might have covered other major historical events from before it came into existence.  Before long, I had some ideas…

Fox Angle: Forced diversity causes millions to go up in flames as shuttle leaves a Challenging hole in the federal budget. 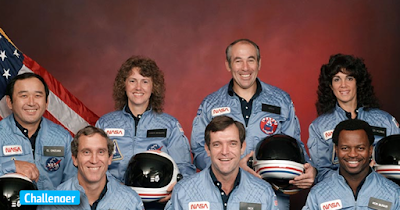 Fox Angle: Infrastructure crumbling out from under feet of radical-liberal California.