You know, maybe Donald Trump IS an evil genius, who’s got politics in America stone cold figured out.

Aside from spouting salacious and obnoxious tweets like a jukebox with Tourette’s, he’s happened upon a foolproof strategy to pretty much do whatever he pleases.  The secret?

Provide so much material for outrage that it overwhelms any who would object, straight to the point of total ineffectiveness.  Just look at the sheer volume of issues, any one of which an opponent could use to rally the troops to fend off.  There’s so much, there is no logical defense.

Here’s a short list, just off the top of my head:

·        The Russia Thing: colluding with a foreign superpower to rat-fuck a political opponent and steal the election for the nation’s highest office.  The multiple investigations are ongoing, including the fake ones run by Republican-dominated Congress, and the real one with the Justice Department-appointed Special Prosecutor.  This is the only issue with legs unless Trump finds a way to fire the Special Prosecutor and install his own lackey to dismantle the investigation.

·        Attempting, already, to influence, bully and coerce the Russia investigation into absolving him and his family of blame.

·        Discrediting our own intelligence agencies when they provide anything that can be considered “bad news.”  Like, “We intercepted a call your campaign manager made to the Russian ambassador.”  How can we use legitimate intel on the world stage if the president is denigrating the integrity of our spy network?

·        Bringing in industry hacks to cabinet positions for the express purpose of neutering oversight, rolling back regulations, and clearing any obstacles to unfettered corporate profit.  In particular, defanging the EPA, by bringing in an energy industry executive like Scott Pruitt and getting rid of all the climate, fossil fuel, and nuclear scientists. 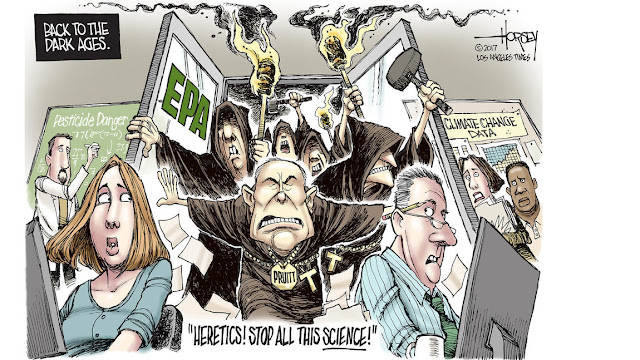 ·        Purging scientists at all the rest of the cabinet departments, to hire big business yes-men.

·        Ditching the Paris Accord on climate change and forfeiting our leadership role at the table.  Allowing the United States to become the laughing stock of the civilized world.  Other countries consider us a small-minded, provincial, selfish and short sighted little nation, long on muscle but short on brains.  Alienating allies and aggrandizing our traditional enemies.

·        Displaying far more interest in producing a “win” than producing an effective health care bill.  And this is the “family values” party, who is supposed to heed and revere Jesus above all else.  (At least that’s what the florists and bakers say before denying services to a gay couple.) 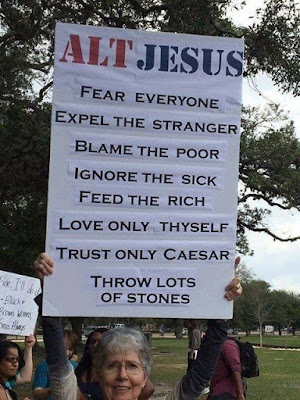 ·        Claiming to respect the Constitution, yet doing everything he can to undermine the First Amendment with respect to religion and more aggressively, criticizing a free press for doing what it’s designed to do.  Freedom of the Press is more than supporting Fox “News” (when they agree with you.) 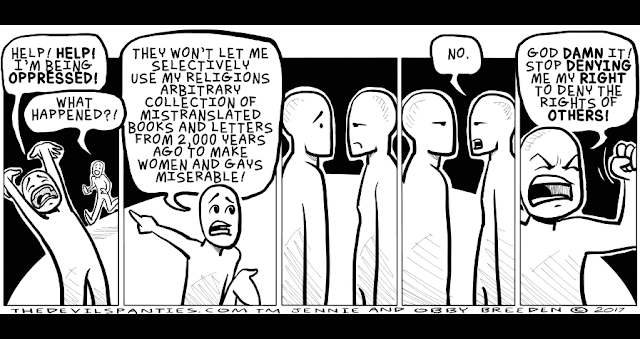 ·        Continuing to campaign and hold rallies 8 months after the election.

·        Continued obsession with Hillary Clinton (regarding alleged crimes) and margin of victory (in losing the popular vote.)

·        Refusal to release tax returns, which could show where the money sources are and what foreign countries hold IOUs.

·        Self-enrichment at taxpayer expense, by taking most every weekend off to visit his own properties.  (Yes, he may stay free, but the taxpayers have to pay for his security, entourage and other staff.)

·        After criticizing the amount of golf Obama played, going out and playing even more golf (at his own courses, of course.)  In 27 weeks, Trump has visited his own resorts 41 times and played 17 rounds of golf.  In comparison, Obama played 11 rounds in the same 27 weeks.

·        Insufficiently disassociating himself from his business.  His leaving it to his sons to run is hardly a sufficient buffer.  Foreign governments are already springing for fancy suites in Trump properties, to curry favor with the president.

·        Already looking into pardons for his family, staff and his own self.  That may be the new normal… Get into office, profiteer your brains out, siphon as much money from the treasury as possible, then pardon all involved.

·        Imploring the police to abuse suspects while they’re in custody.

·        Lastly, a complete inability to tell the truth about anything!  And then combining attacks against the press or anyone else who would dare to fact-check, so that even when the lies are reported, his base won’t believe them.

I mean, look how long Reince Priebus’s resignation was a story.  That lasted right up until new Communications Director Scaramucci shot his mouth off in a taped interview, blamed the reporter, and then resigns/gets fired himself.

And while all these outrages blend together in a sea of chaos, the new Powers That Be are working behind the scenes, to scoop up federal cash, strip public protections and lay waste to our natural resources, in homage to the almighty dollar and unrestricted profit margin.

The funny thing is that this is the best we can hope for, for the next three and a half years.  Sure, Trump may finally do something that gets him impeached, (I doubt the GOP would ever have the balls to turn on one of their own), but the result would be even worse.

Without Trump, we will have Mike Pence left in charge, who with blissful diligence and homage to both Jesus and big business, will go about completing the Republican pipe dream with efficiency and clarity of purpose.

In Pence’s world, women’s’ uteri will be more stringently regulated than a Fortune 500 business. 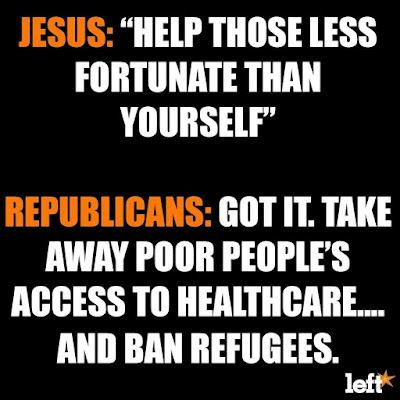 So I’m just going to sit here and root for the chaos to continue.  We’ll all be a lot safer in the long run until we have a shot at flipping the House and Senate in 2018 and taking back the presidency in 2020.

In the meantime, it’s going to be a bumpy ride.
Posted by bluzdude at 8:13 PM