The Limitation of Statues

You have to stand in awe at the ease that conservatives are able to change the conversation from a topic they can’t defend to one they can.

Remember how we were arguing about whether Nazis and white supremacists were bad?  The Republican leadership can’t defend them and still seem rational, yet they are the base that they dare not alienate.  So what are we arguing about now?  Tearing down Confederate statues, aka: “erasing history.”

That’s one the guys at the bar can get behind… “Gee, no, we shouldn’t erase history; that’s what an overreaching, out-of-control government does.”

Thus does any criticism of their side become another symptom of the federal government-run amok.

Nope.  It was “Jews will not replace us.”  Not exactly a Confederate war cry, was it?

The statues were an excuse.  This was a white power rally, pure and simple, for which there is no rational, 21st-century defense.

Secondly, this “erasing history” thing?  Complete BS.  I’ve said it before and I’ll say it again.  You can take the statue down but the history (of an event) is always there.  I mean, somehow we remember the history of events that never had statues in the first place, don’t we?

There is a difference between remembering history and celebrating it.  And there is no good reason to celebrate the darkest part of our nation’s history.

Not satisfied with the initial fallacies, the Nazi apologists started trying to get cute with the analogies.  Like this one: 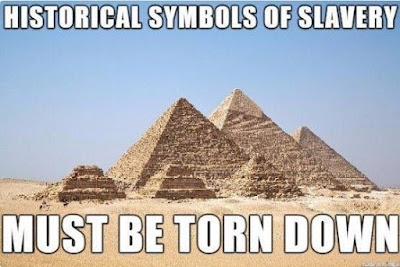 Dudes, there is a difference between a tomb built by slaves thousands of years ago (on another continent) and a contemporary glorification of those who fought to preserve the right of white people to treat black people like cattle, barely more than a hundred years ago.  The two cases are not remotely similar, other than to a poorly educated mind.

The same goes for comparisons to the founding fathers.

No, there is no tearing down statues of Washington and Jefferson.  I hate to use the “product of their time” argument, but it applies.  It’s just the way things were in the mid-1700s.

BUT, when large factions of the nation accepted that black people were “people” too and should not be owned, they did not trigger a secession from the Union and go to war in an effort to keep that ownership intact.  Granted, they were dead by then, but this is an exercise in logic and reason, not a literal representation.  But that’s why they shouldn’t be lumped together.

The founding fathers built a nation; the Confederates waged war to tear it down so they could continue to treat sentient people like property.  That’s why one set of statues need to come down and the other does not.

The rest of these absurd comparison arguments should be torn down and warehoused right beside the statues.

Last week, as you may have heard, the city of Baltimore removed the four Confederate statues that stood within city limits.  They did it smart… they just went in overnight, unannounced, and took them down and stored them.

Two years ago, following that SC church mass murder, Baltimore’s then-mayor Stephanie Rawlings-Blake commissioned a study on that very action.  And in the year and a half since it came back, no one took any action.  I liked Mayor Stephanie but I wish she would have stepped up like our current mayor, Catherine Pugh, and just got it done.

Both current and previous mayors are African-American, as is most of City Council.  I don’t know what the hell they were waiting for.  They were going to get grief from pissed off rednecks either way; might as well be sooner rather than later.

I’m not often proud of Baltimore but I am this week, at least until the next video of police planting evidence.

And I was heartened to see some other cities follow suit, though.  Maybe this thing has legs.  Sure, there will be protesting, but I think it’s more important to be on the right side of history.

And this side will be remembered without having to put up any more statues.