After months, if not years, of dread anticipation, it was finally time to confront a colonoscopy. (Yes, it’s that C-word. If you prefer not to deal with today’s subject matter, best to get out now.)

At my first meeting with my new primary care doctor, late this summer, I finally consented to go under the pipe, only six years overdue. And once I got a look at the instruction sheet, the dread began.

It wasn’t the dread of the procedure; it was the preparations. And not even the incessant pooping… it was the fasting that had me the most worried. A whole day (and part of the next), without food? That was gonna suck so hard.

Director’s DVD Commentary: Obviously, I knew I was going to write about the experience, but even that entailed some dread because it’s already been done. In fact, one of the funniest things I ever read was a 2008 column by my humor-writing idol, Dave Barry, about his colonoscopy. You’ve probably read it too. A condensed version of the column has been floating around on email for years. In fact, you should probably skip my post and go read his.

Also, my close, personal friend, Sherry Stanfa-Stanley, included a chapter about her colonoscopy in her book, Finding My Badass Self: A Year of Truths and Dares. (Go buy it!) So that precludes me from merely dropping every pooping pun I can think of into a post.

But if you stick around, I’ll doo my best. (Sorry.)

I selected a Friday for "C-Day" because normally work from home on Thursdays and Fridays, and I could begin the prep on Thursday without having to take the day off. (And without having to penguin-walk through the office to the men’s room every 15 minutes. Heaven help anyone who would dare to stop me to chat.)

During the preceding week, I was on a restricted diet. Among other things, I was to avoid seeds, nuts, fresh or fibrous vegetables, and fruit. None of this would be terribly restrictive; in fact, that was mostly my usual diet (before Sweetpea).

But I also had to give up coconut, mushrooms, and salami/pepperoni; the latter three really put a damper on pizza night. And avoiding coconut meant I had to stop working on the German chocolate cake Sweetpea made me at the beginning of the month.

The Day Before C-Day (B-Day, I guess) finally rolled around so the time for the “fast” had begun. The previous night, I filled up on leftover pork roast and mashed potatoes. I knew that would have to hold me awhile because all I was allowed to put in my mouth Thursday were clear liquids (water, tea, soda, vodka), hard candy and jello. Red and purple-dyed drinks were forbidden. So I had my supplies in order: 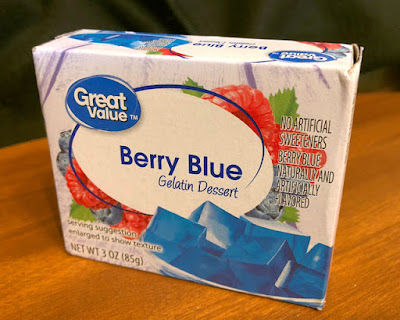 Since cherry and grape were out, I went with anti-freeze blue. 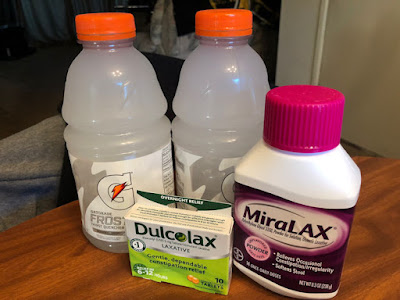 I was surprised that this was over-the-counter stuff. I figured they’d keep it in the back with the Sudafed. It would be easier on the public after a meth lab explosion rather than one from explosive laxatives.

The Gatorade was another dilemma. Again avoiding reds and purples, most of what was left was green and yellow-tinged stuff, which I wasn’t really feeling, and I already had some blue-screen blue. So I went with this odd white-cherry concoction. Think there are any natural flavors in there? 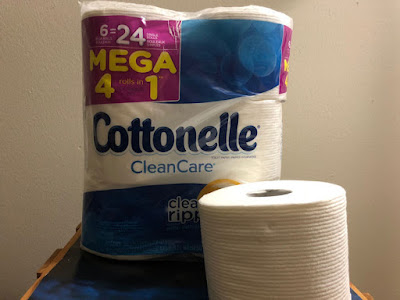 I was leaving nothing to chance. 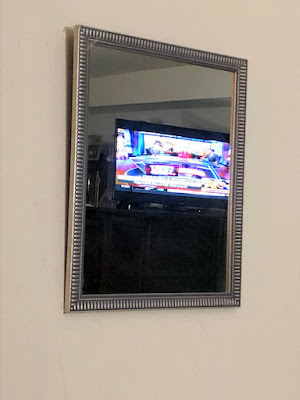 And, of course, I must have in-house entertainment. Between my tablet/iPhone, a half-read Playboy, and my mirror-accessed TV, I would be able to spend hours on the hopper before becoming bored or having my legs fall asleep.

The instructions said to take the Dulcolax tabs at 3:00 PM and then starting at 5:00, to begin drinking 8-ounces of Miralax every 15 minutes until it was three quarters gone. Then at 11:00 PM, take the remainder.

I was not OK with this. I at least wanted a chance to sleep away some of the starvation, but this guaranteed I’d be up into the wee hours. So I decided to start the drill a little earlier than that. 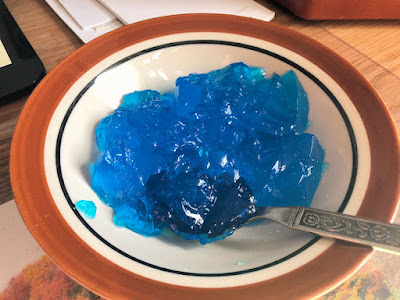 Not a color found in nature. Just Bomb Pops.

Nothing happened for the next two hours. I wasn’t sure if that was normal or not… I figured it was like the Advance Team, in there to soften up the enemy for the full assault.

At 4:00 I mixed up the Miralax and we were off to the races. The powder mixture made it a little thick, but it was rather tasty. Good choice, going with the Glacier Cherry Gatorade.

Second shot at 4:20. No activity. Third at 4:35. Nothing. Fourth at 4:50. Nada. I’m beginning to fear the explosion to come. Fifth at 5:10. At least I’m wasn’t hungry anymore. Sixth shot at 5:30. That was supposed to be the stopping point until I finished the last two glasses later on. I went to check the Miralax bottle, to make sure it wasn’t some kind of internal sealant. But literally two minutes after that last glass, the dam began to crack. About freaking time…

5:48: Now things are opening up and the flood waters are raging. 6:02. 6:20. So far, no worse than an ordinary bout of the runs; not the firehose Dave Barry led me to believe was waiting.

7:00. It took a while since the last event. I wondered if I should start the rest of the Miralax. I decided I should wait.  7:15… the waters are raging. But where is the substance? All that pork and potatoes last night have to turn up somewhere… Who knew Miralax was also an industrial-grade solvent?

Next event was 8:15 and I seem to be tapped out.  I figured it was time to hit the remaining potion. No way I was waiting until later that night, only to have it kick in at 2:00 AM.

9:00, 9:50, more hot sauce. Around 11:25, watching the end of “Spiderman: Homecoming,” I nearly committed the cardinal sin… I almost farted. Luckily I caught it in time before I had to bleach my sofa.

I wound up the night with one more trip right before bed, around midnight, and found I had finally reached the prized “clear” stage. (And you can thank me later for not describing the full-color spectrum of the preceding stages.)

Because my brother’s office is literally a minute away from the doctor’s office, I had him give me a ride in. He said he’d pick me up at 9:00, which meant I got a solid night’s sleep until I got up at 8:00.

I was worried, though… the first potty trip of the day showed I’d surrendered the coveted “clear” status. Luckily I didn’t have to worry for long; the second trip brought me back to clear. I tried one more time right before we left, just to be sure, but I was finally tapped out. I think maybe dust came out.

Once at the hospital, I was checked in and gowned in no time. They told me not to even bother with trying to tie it in the back, which was fine with me. The last thing I needed was a dislocated shoulder from trying to tie up that torture device.

As per my usual custom, I tried to be charming and fun with the nurse who got me ready. I always want the medical staff to love me, just in case anything goes wrong. Same with the anesthesiologist… He was in charge of making sure I remember nothing about the ordeal, so I don’t want him doing a half-assed job.

Right before they wheeled me in, I asked if he could stow my phone under the gurney, with the rest of my stuff.  He said, “Are you sure you don’t want to take a selfie first?”

That cracked my shit up for the next five minutes. I was like, “That would be the most epic Facebook update ever!”

I said, “I can just see it… me laying on my side, gown on, IVs in, all the doctors cheesin’ behind me, everyone giving a big Thumbs Up!”

All we’d need is a selfie-stick. Or a camera-shy intern.

I added, “Just wait until the selfie generation starts aging into colonoscopies. This is gonna happen, you just wait.”

We were both still chuckling when the doctor came in and my guy goes, “He wants to take a selfie with us!”

I was like, “KIDDING!  I was KIDDING!” I’m pretty sure they had more important things to do.

So they got me all arranged, lying on my left side… bottom leg straight, top leg bent, and gown pulled over my hip leaving buns exposed to the various people hustling in and out of the room.

The anesthesiologist was right in front of me so I looked up and said, “I’m feeling entirely too conscious right now.”

He said, “But you're NOT conscious. This is all just a dream.”

Who knew these guys were such comedians? I said, “I hope not because this is the worst dream ever! I could be on a beach somewhere but here I am, HERE, with all of YOU…”

And then a moment later… I was OUT. There was no hazy awareness of anything; I was knocked right the hell out. One minute I’m laughing with the anesthesiologist and the next, the doctor is telling me it was over and all results were negative. No polyps, no nothing.

Sweetpea had just arrived and they led her right in. This was the second time in five months she’s seen me in a gown on a hospital bed. After about 15 minutes of letting me get my head together, we were sent on our way, discharge papers in hand.

Later, as I was looking through the documents, I saw the analysis of my colorectal health. It seems they have a scoring system… There are three segments and each is graded on a 1-3 scale.  I had one 2 and two 3s, for a “Boston Bowel Preparation Scale” of 8 out of 9. I felt like I just pitched a one-hitter and won the Colon World Series.

Next thing I gotta do is talk to my buddies and see what their scores are. You know us guys… once there’s a score involved, everything becomes a competition.

So then I turned the page and I’m immediately confronted with… Pictures!  Full-color pictures of my colon! Jesus! They could have at least put a warning page in there. You don’t just spring something like that on a guy…

No, I will not include the pictures here.  You’re welcome.

So, now that’s all done and not only were there no medical issues, it really eliminated all the fear and anxiety about the process.

I’m just amazed that there were no findings. I figured, with all the meat and drink I consume, there had to be something wrong in there. Now they’ve gone and encouraged my behavior.

After spending the day emptying out my colon, I can now spend the next ten years filling it up again!
Posted by bluzdude at 7:21 PM