Remember how there used to be a Tea Party who got howling mad about any increase to the deficit? I sure do. I wrote about it from way back in 2009 to clear up to this year that they were only concerned about the deficit because it wasn’t one of “their guys” in charge of the spending.

Trump’s new tax plan is destined to explode the deficit. Even without the details laid in, it’s going to be break-the-bank expensive.

Anyone see any Teabaggers out in the street demonstrating? Anyone hear any Tea Party senators making anti-deficit spending speeches on the Senate floor? Any Tea Party representatives railing against increasing the deficit into any microphone they can find? 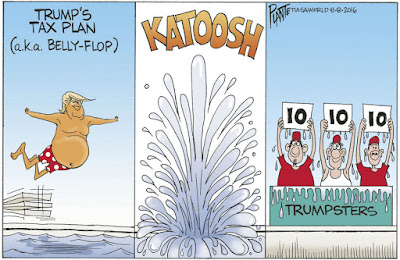 Of course not. Because it’s their guy doing the spending and for some unfathomable reason, spiking the deficit to give the country’s top earners a tax cut seems like a good idea to them. (Probably because they’ve been funded by the Koch Brothers all along, and the Kochs want tax cuts.) 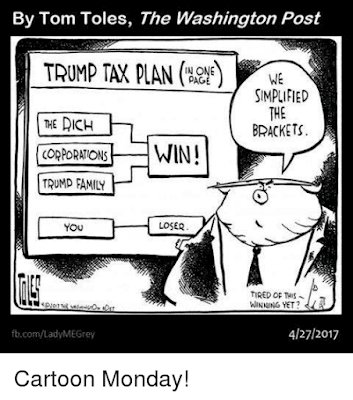 If there are going to be any offsets, look for them to come from programs used by the middle and lower classes.

Perhaps they actually believe it when the GOP says this tax cut is targeting the middle class. But all you have to do is look at the ideas they’re talking about and it’s as plain as day that the only people upon whom this will have a positive effect are the top 1%. 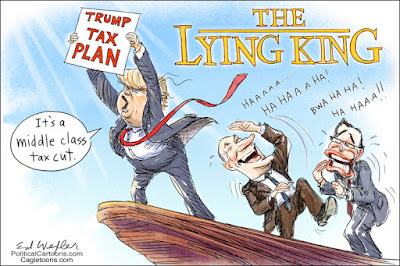 I mean, repealing the Estate Tax alone affects around 200 people in the entire country… the richest of the rich.

Or perhaps they believe it when they’re told that giving tax cuts to the rich will trickle down into more jobs and better pay, when everyone with at least a couple of brain cells left and who were alive in the 80s knows that when Reagan cut taxes for the upper crust, there was no glut of jobs or higher wages. There was a recession. 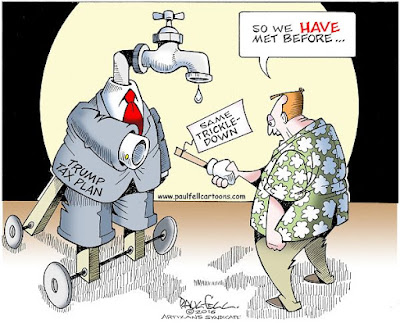 And when George W. Bush doled out a huge tax cut to the wealthy, they pocketed the dough and paid out higher bonuses to the executives. There was no job creation, only the Great Recession of 2008.

When Kansas and Wisconsin enacted the Republican Nirvana of slashing tax rates to business and the upper class, the states’ economies dove straight into the dumpster, where they remain.

Tax cuts for the rich DO. NOT. LEAD. TO. MORE. JOBS. It’s just the excuse they use to get you to continue to vote Republican. How many times must this play out before we catch on to the ruse? 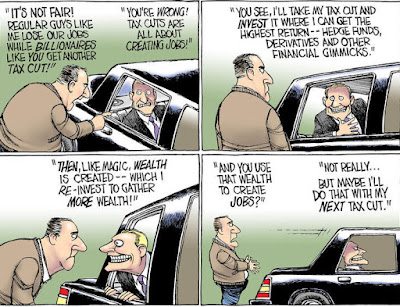 On the other hand, Minnesota raised taxes for the upper class and cut taxes for middle and lower classes. Know what happened? Booming economy. Schools are properly funded and performing to high standards. It’s pretty much the opposite of Kansas. 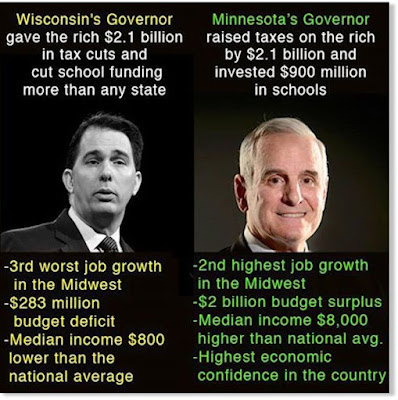 Republicans love to talk about how we have the largest corporate tax rate in the world. (We don’t, but why let facts get in the way?) But even if it were true that we did have the highest rate in the world, why would it matter if no one actually pays that rate? With all the loopholes and gimmicks corporations use to reduce their tax burden, the official rate is irrelevant. The biggest companies pay a lower percentage than you or I do.

I would have no issue with lowering the corporate tax rate if they could ensure that would be the amount the companies paid. But they’re not talking about closing the loopholes, are they? Not seriously.

However they stack it, there is no scenario where corporations are going to pay more than they do now. Such a proposal would be killed in an instant by big business lobbyists.

They can hype it as a boon to the middle class as long as they like. Just remember the ultimate truth… This tax cut isn’t for us. We’re just getting enough to wet our beaks.

The real meat goes to the richest people in America. It’s the Republican way.