Please Excuse my Lack of Optimism

My last couple posts have been of a personal nature, so let’s see what’s going on around town.

Manafort’s charges don’t have anything to do with the campaign just yet, but it’s not hard to project that he’ll be squeezed for information. Nonetheless, the Whitehouse is doing backflips to try to redirect blame as well as the public’s attention.

Trump is still flogging the Crooked Hillary Colluded with the Russians theory, which makes perfect Trump sense that she would seek to get cozy with the very people who were proven to have bought millions of dollars’ worth of ads to turn people against her.

Folks, this is going to be a three-ring shit show of the highest caliber, as the prosecutors slowly build their case and the Administration does everything in its power to discredit and distract. Look for the bombs to fly any minute, because only a no-good commie would try to prosecute the president during wartime, right? 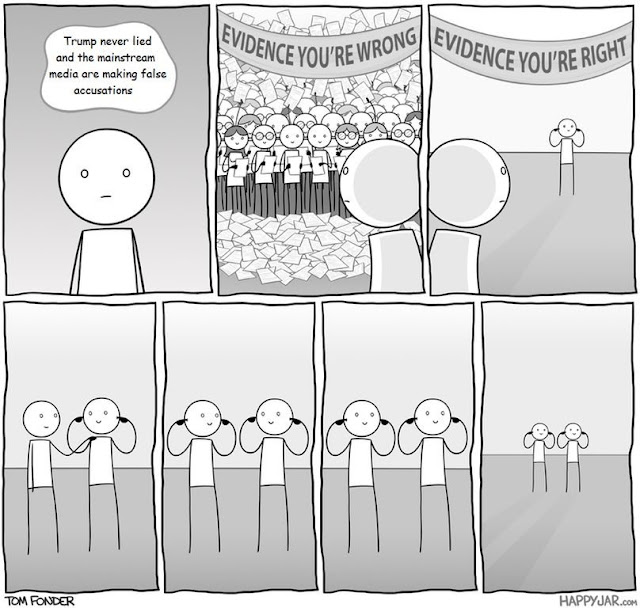 I don’t plan to follow this story molecule by molecule… I’ll wait for Mueller to finish his job. Anything we think we know at this stage is speculation. Let the man take the deal and play his hand before we start keeping score.

In the meantime, there are other things worth discussing, like:

Cuts to our 401k
One of the ways the Republican Congress is trying to pay for their tax cut is by limiting how much we can put in our 401k accounts, pre-tax. They’re talking about lowering the current limit of $18,000 per year to $2400.

That’s right. First, they came for our company pensions and replaced them with 401ks, so that companies could avoid paying for the retirement they’d promised its workers. The bigger companies offered a corporate match, up to 4-6%, and as a greater incentive, it was pre-tax. The theory was that we’d pony up more for our retirement if it could lower our taxes now.

Now they’re coming for the rest of it.

If there was ever a clearer picture of the Republican ideology, this is it. They want to gut the retirement plans of the middle class in order to fund giant tax cuts for the 1%. That is today’s Republican.

In return, they say the 1% will turn around and stimulate the economy by creating more jobs and paying higher salaries, despite this having never happened before in the last 60 years.

Trump has stated via Twitter and his post-campaign rallies that they are not going to cut 401ks. In response, Paul Ryan said that we shouldn’t listen to the president on budgetary matters, thus letting us all know that Congressional Republicans do not feel bound by the president’s statements or promises.

The only thing the Republicans feel bound by are the Koch brothers and they want their tax cut. And I’m sure they’d like not to have to contribute any more to employee 401ks than they have to.

Nor do they care to contribute to the:

ACA
Republicans are now intentionally sabotaging Obamacare in a deliberate effort to make it fail. They are injecting massive uncertainty into the insurance industry by withholding the subsidy payments that prop up the whole operation.

Trump calls them “bailouts,” but that’s a heavily slanted word. They are really contractually obligated payments to subsidize insurance for the poor. The insurance companies did their part; they offered policies at reduced rates on the promise of receiving these funds. The government is trying to renege.

Making these payments are not a bailout, they are upholding the government’s promise. But Trump knows that his base hates the idea of a “bailout” for anything… Banks, car companies, sinking ships, you name it. This is what they'd like to see in its place: 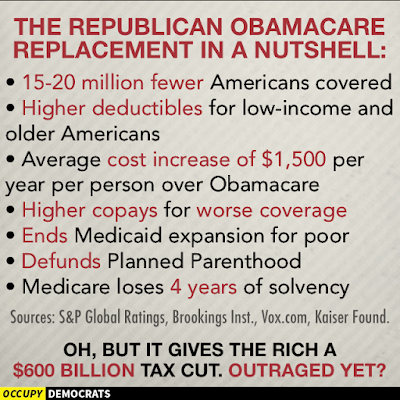 Beginning the Neutering of the CFPB
In another perfectly Republican congressional action, the GOP stripped the public of the right to file a class action suit against banks. Banks can now go back to when they could concoct fine-print clauses tying customers to in-house arbitration to address all wrongdoings. In other words, that’s like playing a ballgame where the other team provides the park, equipment, umpires, your teammates, AND writes the rulebook.

The class action allowance was a mainstay of the Consumer Financial Protection Bureau, which Republicans have been trying to shit-can ever since it was created.

Once again, congressional Republicans take bold action to protect banks from customers they have wronged. (In most cases, intentionally wronged, like opening millions of fraudulent accounts under customers’ names.)

You might ask, “Aren’t they afraid of being voted out by a pissed off public?”

Hell no. First of all, they have Fox “News” out there explaining to the base how all these actions are GOOD for us, appearances be damned. 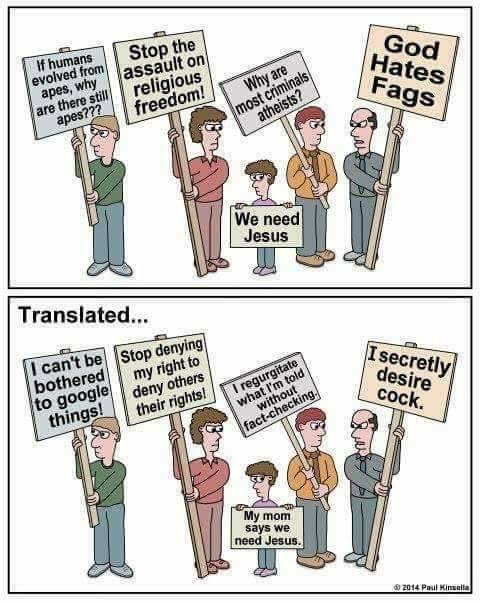 Second, congressional districts are gerrymandered beyond belief. It would take a massive revolt of the base to turn the House.

And third, in states where the GOP has governmental control, (and that’s most of them), they are busy stripping names from (likely Democratic) voter rolls for specious reasons. And as a second prong, they are instituting scores of hoops to jump through, like voter IDs, to register (or re-register) to vote.

“Well what’s wrong with IDs?” you may ask.  The deal is that they disallow any IDs they feel are tied to Democratic voters, like university IDs, library cards, or MENSA memberships. Gun licenses are valid though… They also raise the cost of obtaining the official IDs.

While we twiddle from one distraction after another, tawdry sideshow after salacious accusation, the Republicans are quietly stacking the deck. They get in, they change the rules of getting in and then spend their public “service” careers funneling money upward to those who have the most.

That’s why I’m not optimistic about regime change anytime soon. Even with a Trump impeachment or arrest, we’d still have Mike Pence or Paul Ryan. Both are minions of the Koch brothers, especially Pence. They’ll get the Republican middle and lower class-destroying agenda passed without stepping on their own dicks because they’re not trying to be popular and populist.

They don’t give a shit what We the People think; they answer only to their corporate masters.

Would that our voices matter as much as corporate dollars…

So "A Koch and a smile" is our destiny? Poo-Poo on that with apologies to Mean Joe Greene who would be a better leader. Instead of obstructing, he would just beat the shit out of errant law makers and breakers.

I don't understand how anyone still thinks we live in a democracy at this point.

We don't. Our country has been carved up and served to the rich and influential. Our function now is merely ceremonial.

Maybe the time is almost right for a massive revolt. If something turns the Trump base then a small revolution is assured. What are the odds since most of them don't pay attention to reality?

The Koch brothers have done more than anyone in the world to promote climate change denial and will bear responsibility for the chaos that lies ahead. History will look back on them the way we look back on feudal lords and Roman emperors.

That's what it will take... his base turning. Not sure what has to happen to cause it... they don't seem to care about losing their health insurance, jobs or tax cuts. (Obviously, I'm talking about his low to middle-class base, not the corporate elite. They're happy as pigs in shit right now.)

Oinkers have enemies too. BACON LOVERS, RISE UP!!!