Have you seen how conservatives and gun “enthusiasts” are bending over backward to assign blame for the Florida school shooting everywhere but with the easy availability of semi-automatic rifles?

The kids didn’t report their suspicions. The FBI dropped the ball because they were distracted by the Russia investigation. The Deputy waited outside too long. Unarmed teachers/Gun-Free Zones.

Each and every excuse there is bogus, except maybe for the Deputy waiting too long to go in. But I have doubts that he could have gotten into position in time to stop any of the killings. “Best” case, they shoot the kid inside rather than take him into custody outside, like they did. And who knows how many innocent kids get shot in the crossfire?

The one that’s getting the most traction is the most ludicrous; that we should be arming our teachers with guns so they can return fire. The Republicans are searching for their own gun-wielding Sister Mary Elephant.

I don’t know about you, but I’ve had teachers I wouldn’t trust with the TV remote, let alone a lethal weapon. But even allowing that you’d have to make it an optional thing, I can’t believe that there’s anyone that thinks having more guns in school is a good idea.

I call this the Die Hard Theory, wherein some average Joe Teacher can wield lethal firepower in a high-pressure, chaotic, life and death situation and not only shoot the bad guy(s) but not hit anyone else, like Bruce Willis does in the Die Hard movies.

I saw a blurb that said that in live-fire activities, the NYPD hits their intended targets with only 18% of their shots. Now I don’t know if that’s true, but even if it’s 50%, these guys have gone through rigorous training with realistic simulations.

And we’re to expect that we can train teachers to do better than professional law enforcement officers, in the most chaotic and emotionally fraught situation imaginable? This is not target shooting on a range or in the woods. This is children running and hiding and your pulse is pounding and a shooter with rapid-fire capability is roaming the hallways.
And that’s just the obvious stuff. Think about some of the other scenarios.

What happens when a teacher pulls a gun on a student who’s misbehaving?

What happens when a student gets ahold of the teacher’s gun?

What happens if the gun gets stolen?

Who is responsible if a teacher hits an innocent student while defending against an active shooter?

What happens if a first responder sees a teacher with a gun and shoots him? If I were a black, male teacher, I wouldn’t want to come near a gun, lest I get accidentally shot by the police.

Then there’s financial stuff… Who’s going to pay for these guns, (while teachers often have to buy their own school supplies to give to kids who don’t have them?)

Who’s going to pay for that training? (Again, this can’t be range training, it would have to be a high-level program.)

Who’s going to pay for substitute teach for teachers who are off getting gun training, (assuming the teacher doesn’t give up time in the summer?)

Who’s going to pay for these “little bonuses” President 45 mentioned?

Teachers already have enough to deal with, fixing all the damage done to kids by their parents. 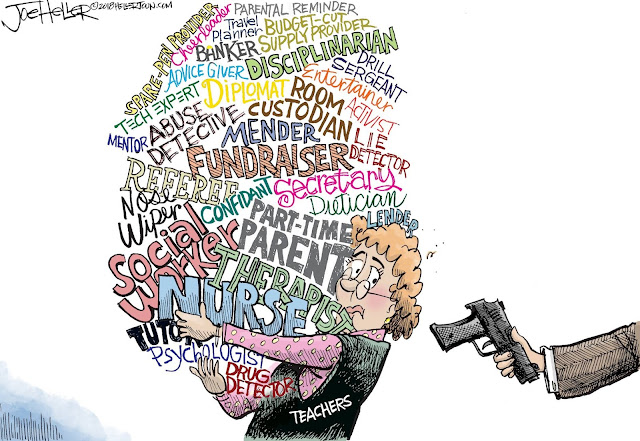 No, this is a bad idea and it just goes to show the lengths the gun nuts will go to keep any tinge of culpability away from the gun industry. Just look at the obvious flaws in the latest crop of Facebook gun memes. 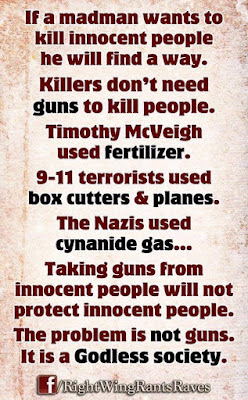 No, killers don’t need guns to kill. But when McVeigh blew up a building with fertilizer, we banned or restricted large-quantity sales of fertilizer and the Sudafed chemicals. We can no longer take knives or box cutters on planes. The Nazis were a governmental entity and totally don’t have any logical place on this list, but even so, we banned the use of nerve gas. And don't even get me started on the atrocities committed by dedicated "children of God."

Guns are the only lethal weapons we don’t rein in when they’re used to commit crimes. And that’s because the NRA, whose only constituency is the gun manufacturers, convinced people that any regulation on guns is an assault on the 2nd Amendment, which much remains sacrosanct. In other words, they don’t care how many bodies pile up as long a gun sales don’t drop.

Then there’s this piece of willful ignorance: 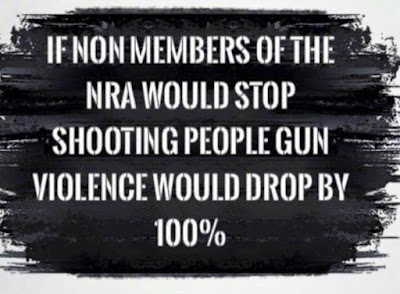 The NRA knows full well that the problem America has with them isn’t what their members do, it’s what the organization does. They aggressively fund candidates to the point that they own them on gun issues. And if anyone casts a hinky vote, not only do they start funding competing candidates, they fire up the smear machine by unleashing Fox “News” on TV and the bots and trolls onto social media. 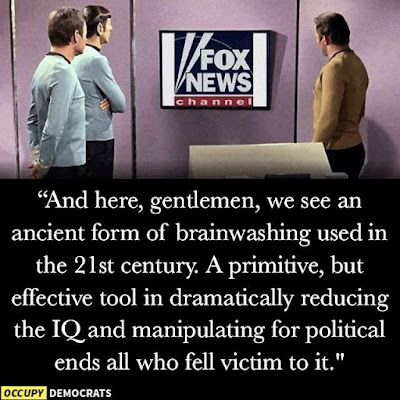 That is why you’re watching conservative politicians twisting themselves into knots to avoid casting aspersions onto the gun industry; they’re protecting their own jobs at the expense of schoolchildren and anyone else with a pulse and the will to live. But the blame has to go somewhere, doesn’t it?

And Trump? NRA or not, he will always come down on the side of appearing “Strong.”  That’s his favorite descriptor. He wants to be strong. His opponents are weak on this and weak on that, but he’s always stroooong. He wants more guns and more bombs and a stronger military with bigger planes and I have never seen a bigger example of “compensating!”

He even said that if he were at the school, he would have stopped the shooter with his bare hands.

This guy doesn’t even want to shake hands without hand sanitizer. Purell should have sponsored his campaign. 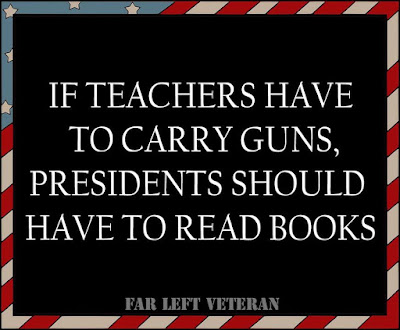 Notice how he and the rest of the Republican leadership) want other people and other places armed, but when it comes to places that Republicans gather? 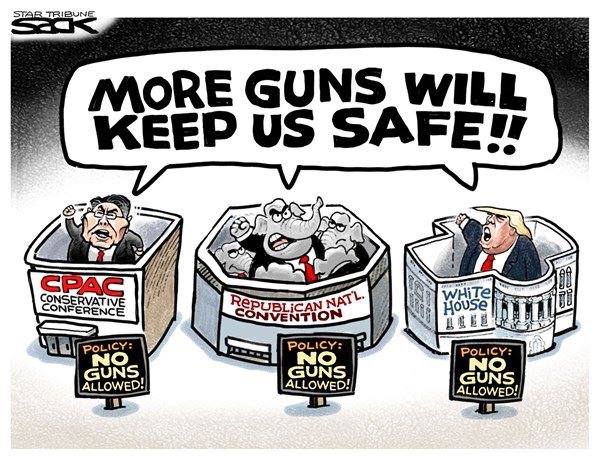 “Except where it could affect ME…”

How messed up do you have to be to attack high school-aged survivors of a mass shooting? Have you seen the attack dogs sharpening their fangs for these kids? One kid is getting death threats. Another is being ridiculed for her haircut. One minute they’re dodging bullets, the next they’re getting flamed online for having the nerve to want to do something about it.

The argument about keeping arms to go up against the government is ridiculous too. Ask the semi-automatic rifle-wielding Taliban how they fared against the US military. They were squashed like bugs. No band of local yokels is going to go to war against the US of A, even if we DO elect another black man. “Red Dawn” was another movie unpinned from reality.

I really hope the kids’ movement grows legs and they can transform speeches and demonstrations into voter registration and then VOTES. Because nothing will ever change with gun laws until politicians who are beholden to the NRA are voted out of office.

Voters have the power to do that. We all do. We can ignore the threats from the gun fondlers and ignore the smears against decent people and point out the nonsense spewing from the NRA about the sanctity of the 2nd Amendment and elect people who want to end the carnage. Because there’s one inescapable fact:

No civilian needs a semi-automatic rifle or high-capacity clip. Not for hunting, not for home defense, not for personal protection in the streets and not for the overthrow of a government who happens to represent the will of the country, if not their own.

And once you strip away all their bullshit, all that’s left is, “But I wanna gun that goes boom-boom-boom.”

No, a ban on semi-automatic weapons and high-capacity clips won’t eliminate killing or violence. But it will make it harder to kill so many people in so little time. Maybe not today, or next year, or within this generation. But the difference will come.

The lack of immediate gratification is no reason to delay a necessary action. Even the kids can see that.

Parkland science teacher, Sean Simpson, said, "If you need an AR-15 for hunting, you better get another hobby."

Between this stupid idea and Cadet Bone Spurs saying he would have run into the school unarmed had he been there, my eyes are spinning in my head. Teachers have to buy their own paper and pencils because of budget cuts, but someone is going to buy Glocks for all of them. It is just about the stupidest idea out of Washington in the past year and there have been some doozies. The stoopid, it burns.