Yesterday, 12 17 people were killed when yet another gunman went into a building and randomly shot a bunch of innocent people.

We Americans have already expressed the opinion that we don’t care.  I mean; we've been expressing it for the last 20 years and even more loudly in the last several.  Sure, a few people try to do something to change the gun-lust nature of our culture, but they are quickly and loudly beaten back into the margins.

***
I wrote those words on this site about four and a half years ago and obviously, not a damned thing has changed. We are in the same endless cycle. 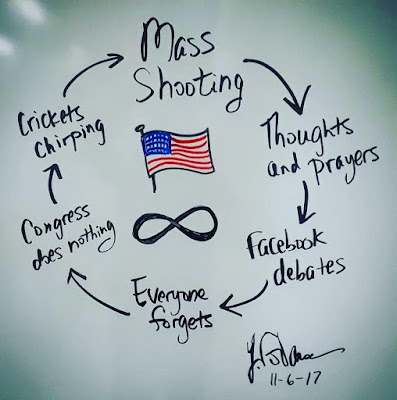 As soon as the tragedy hits, conservatives and gun nuts are out in force, saying “This is not the time to discuss the guns.” And that buys them time for the furor to blow over and the public to move on to the next outrage. And then the next mass killing happens and it’s “Not the time” again. At no time have I ever heard them say, “OK, it’s time,” which is by design.

And then they push the “good guys with guns” fallacy, which is good for the NRA’s business, but never takes into account this part: 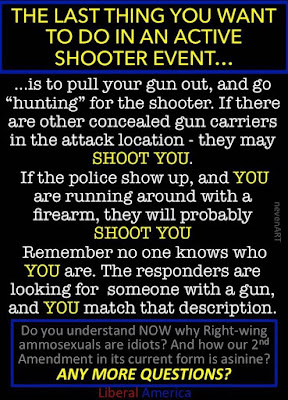 Republicans have no intention of addressing the slaughter committed with semi-automatic weapons for two reasons:
1)      The gun fetishism entrenched in their “base,”
2)      The absolute power to remove them from office wielded by the NRA. 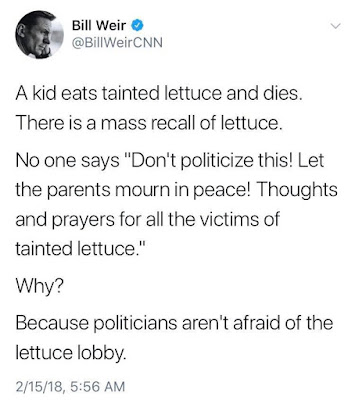 And thus do we find ourselves in the perpetual state of “Now is not the time,” and “Not enough guns.”

This is also the only time Republicans pay any attention to the issue of mental health. People with Mental Health Issues are much in demand by the right, as convenient scapegoats for the shootings, so to take the heat of the guns. They rail against how we have to do better in addressing mental health problems, but not so much that they won’t eliminate policies that actually address mental health like the one President 45 revoked last February. 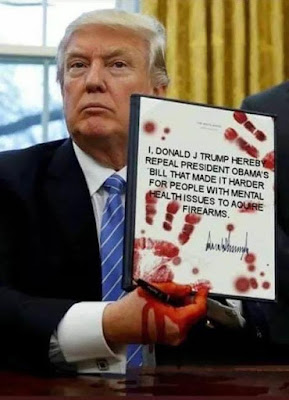 When a president tweets about how the violence problem comes from mental health issues but just personally eliminated a policy that restores the ability of mentally ill people to buy guns, he is basically saying “it’s my fault,” but isn’t smart enough to realize it.

Now, I don’t think it’s directly the president’s fault that some twitchy dipstick shot up his school. I blame all the Republicans who took money from the NRA and the Democrats who are too spineless to stand up to them. These are the people that overturned the assault weapons ban and made semi-automatic rifles easier to get than a six-pack.

That’s outrageous. A nineteen-year-old can go to the local gun shop or Wal-Mart or Target and walk out with a legally purchased semi-automatic rifle. But not a bottle of wine, because he’s too immature and that would be dangerous. That is the extent of the perversion that is our current gun legislation.

Of course, this was a white kid.

You want to get some gun laws changed? Let every black man in America line up to purchase a semi-automatic rifle. Laws will be changed within the hour. 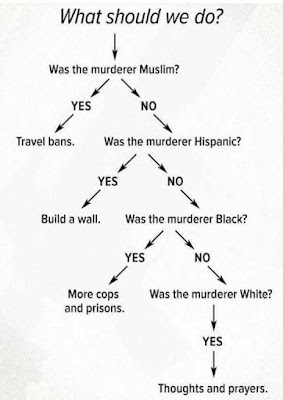 I’ve said it before but there is no rational purpose for any civilian to own a semi-automatic rifle or high-capacity magazine. None. The zombie apocalypse isn’t real. A civilian can hunt or defend his home with a handgun, shotgun or standard rifle. This is real life here, not the movies. But the carnage in our schools and public places is very real. 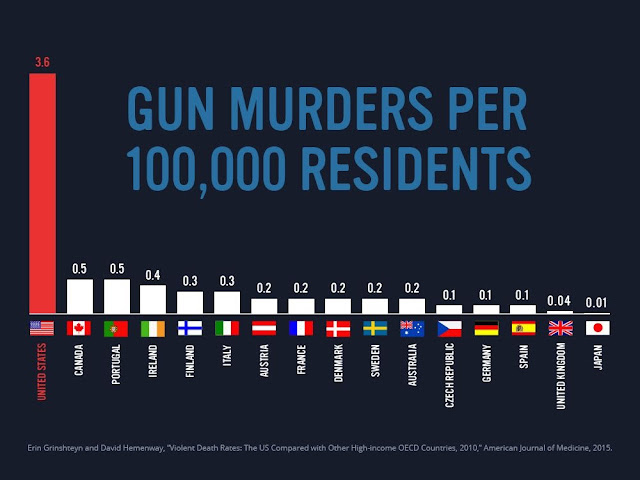 If we remain a culture that values the rights of a bunch of gun nuts to play with lethal weaponry over the rights of schoolkids not to get shot for sport, then we deserve what we get.

And I know the old tired “gun defenses.” Like this one: 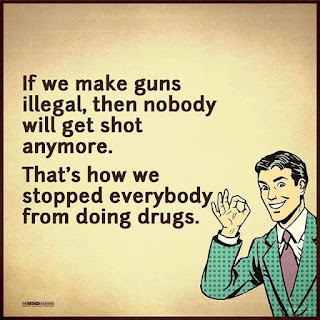 No one in their right mind ever said no one would get shot anymore. That’s a classic straw-man argument. Any changes in gun legislation would take years, if not generations, to show an effect, solely because of the resistance to giving up guns that are already in homes. We must have the patience to let new regulations work. This isn’t a problem to be solved over a long weekend; there is already far too much firepower in the country’s collective gun closet.

But do you notice how we still have drug laws? And you know why? That’s because they make it harder to get the goddamn drugs. You have to be covert. You have to take precautions. You have to have cash. You don’t just walk down to the fucking big-box store with a charge card and walk out with heroin.

There should be hoops and there should be rigorous background checks for any gun sale because at each stage, there’s an opportunity for a plot to be snuffed out.

I think the kids have it right. This time around, the kids who just went through hell witnessing the murder of their teachers and classmates are asking very hard questions of their representatives. And if they can’t now, these kids will be able to vote very soon. We’ll see if this outpouring of outrage has any legs. I hope so.

And I think the first order of business must be to neuter the power of the NRA.

The polls always say that people are generally in favor of common-sense gun regulation. It’s only the hard right and gun fetishists who demand the Second Amendment be tantamount and absolute.

So we should make a pledge… we won’t vote for any politician who receives funding from the NRA. (Which basically means, “Just vote Democratic.”) (I know, not always.)

This won’t be easy. I mean, I’m sure the NRA can find ways to funnel money, quietly and anonymously, to any politician they please, thanks to Citizens United. (Thanks, Koch Brothers!) But as constituents, we can ask for politicians’ stances on gun legislation, vote for those who pledge to pass meaningful gun regulation and then see that they follow through. This is especially true in the House of Representatives, where they have to run for re-election every two years. They are, by design, supposed to bend with a rapidly changing culture, as expressed by their constituents. If they renege on their word, we vote them the hell out and put in someone else.

The NRA can’t force us to vote for their guys; all they can do is run smear ads against their opponents.  (Well, and buy their own Russians to hack the election process.)  But it’s up to us to decide who is going to do something about the mass killings in this country. We already have enough martyrs; we need to do something to stop creating more of them. 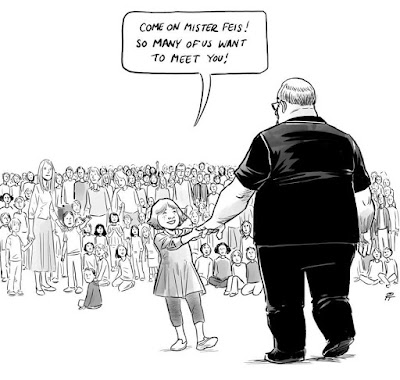 As for the current batch of gun-buggering politicians, they can shove their mealy-mouthed Thoughts and Prayers right up the same hole they keep their trigger fingers. 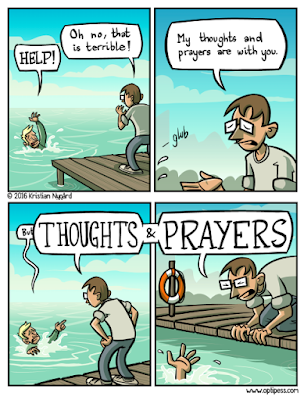 I have so many things to say. You’ve said nearly all of them. I’m sad and I’m angry. I truly hope these young people don’t give up the fight. We need then.

If I were teaching today I would cancel all my classes until new, effective gun restrictions apply. Ban the AR 15, ,repeal the second amendment. Were any of the school murderers "well regulated militia"?

This is a case where youthful idealism can be productive, because they don't know what they can't do. I'm hopeful they channel their outrage into something effective rather than just attention-grabbing stunts.

O GOODY we can still use our muskets.