I’m really amazed that the backlash against unmitigated gun violence is still going on. After most mass shootings, all the attention is gone from the subject before the funerals are even finished. “The Kids” have done an admirable job; so admirable, in fact, that there has actually been some change.

Dicks Sporting Goods stores have stopped carrying semi-automatic rifles and banned sales of high-capacity clips to minors. They were already part-way down that path. They stopped stocking these weapons in their Dick’s-branded stores but still sold them at their 35 Field and Stream locations.

Walmart raised the minimum age to buy a firearm to 21 and stopped stocking rifles that even look like a semi-automatic.

And somehow, the Republic still stands.

I’m not too excited by these developments though. I mean, there’s no reason they can’t just decide to reverse course, once the heat dies down.

Remember that these are giant, highly sophisticated retailers. The only thing that matters is the bottom line and these guys have the most advanced audience measurement techniques around. I’m sure they’ve taken the country’s temperature and concluded that for all the noise coming from the NRA, they don’t outnumber the rest of us. So, if they’re going to be boycotted, better to be shunned by 5 million NRA members than 240 million of everybody else.

It was telling, watching the reaction to Delta Airlines revoking the discount they gave to NRA members who were traveling to their convention. You’d have thought someone was lining up NRA members and shooting them, for all the hollering. (Delta was “Persecuting NRA members,” I believe the sentiment was.)

That’s the essence of the modern conservative… when they don’t get treated better than everyone else, they consider it persecution.

And the kicker? Delta said last year, they only had 13 people use the NRA discount on the way to the convention. All that fuss over 13 discounts.

Republicans: The Party that Cries Wolf!

You can tell the NRA is ratcheting up their press operations though. Last Wednesday, there were three stories on the top of my Yahoo home page, about people who defended themselves with guns. And from now on, I’d expect every such incident to be splashed across all the news feeds.

It won’t matter if there are hundreds of stories of people getting shot and killed, we’ll hear about those few who used a gun to save themselves.

We don’t even pay attention to the standard shootings anymore; they’re just too commonplace. There are only select incidents to which we’ll pay attention: shooting white kids, blonde women or a bunch of people all at once. But we’ll notice every time someone uses a gun to fend off a mugger or burglar, the NRA will see to that. And that’s how they convince people that we all should be armed. It’s a psychological ploy to make us think it happens every day. Doesn’t make it valid, though.

One of the talking points President 45 has been using, in making the case that teachers should be armed, is that an armed facility will make kids think twice about bringing in a gun and shooting up the school.

This is demonstrably false. Why? Show me one school shooting where the shooter got away.  Just one.

The prospective shooter knows his life is over once he fires that first shot in school. He will either be killed by cops, kill himself, or spend the rest of his life in jail.

The kids know who he is. The Administration knows who he is. There is usually videotape. There is no slipping back out of the school and carrying on with one’s life, unnoticed. The shooter knows this and goes in anyway because he doesn’t care.

The presence of armed teachers or coaches changes the equation, not a bit. Under the rosiest of circumstances, if everything goes perfectly, it’s possible the shooter could be stopped before he kills more people. But that’s not deterrence. Deterrence is when someone who wanted to shoot up the school due to consequences, decides not to go in.

What Trump is talking about is mitigation, not deterrence. Mitigation is making a bad situation less bad. And whether an armed school is a sufficient mitigation or not, once you factor in all the things that are likely to go wrong, (shooting of innocent students, or the armed teacher, and all the subsequent lawsuits), the mitigation shrinks considerably.

With all the talk of what to do to prevent more school shootings, I haven’t heard a single word about one thing that could really make a difference.

How about our nation’s schoolkids stop being such little pricks to each other, huh? Stop incessantly picking on the freaks, geeks, and loners and just be nice.

Have there been any school shooters who weren’t already bullied, threatened or ostracized? They all seem to have that one thing in common. They hate the other students, and by extension, the school administration that allows the steady drip-drip-drip of torment to continue unabated.

It must be a part of the human condition… grownups do it so why not the children? Everybody seems to need someone to shit on.

Kids, from grade school on up, can be brutal to each other. Anyone who breaks the favored mold is ridiculed and harassed. I saw it every day when I was in school and now with social media, the harassment goes on 24/7, not just during class hours on school grounds. A little kindness, or even just the absence of malice, can go a long way to defusing some of these walking time bombs.

Granted, there are some legit sociopaths running around the hallways, regardless of what others do. This Parkville kid sounded like he might have been one of them. And the kids repeatedly brought him to the attention of the school and the police, yet no one acted.

So yeah, going all Kumbaya isn’t going to solve every incident; no one thing will. But it could make a difference in there being fewer shootings, couldn’t it? Any action that causes a reduction in the number of mass shootings should be embraced, even if it didn’t stop all of them.

So, to sum up the position of this blog, to reduce the number of mass shootings in general, (school shootings in particular):
·        Ban semi-automatic weapons, which no civilian needs for any legitimate reason.
·        Ban high-capacity clips, which no civilian needs for any legitimate reason.
o   In the face of the slaughter that these weapons enable, having fun on a shooting range or in the woods does not constitute a legitimate reason. Nor does taking on the US Army or National Guard because another black guy got elected president.
·        Offer buy-backs or trade-ins for these items.
·        Listen to kids when they identify a potential shooter or someone who’s “gonna blow,” and act accordingly.
·        Kids, don’t be such dicks to each other. The geek of today can become your killer of tomorrow.
·        None of this will work immediately because there are too many of these weapons in circulation already. But the longer the regulations stay in place, the more effective they will become. We saw what happened with the semi-automatic weapon ban that was sunsetted after 10 years. 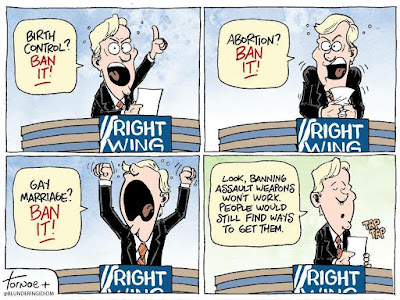 from your Brit uncle, "People with guns tend to get shot."
and from Otis Redding, "Try a little tenderness."