Everyone knows that this president lies about everything. Whether it’s trivial or a matter of life and death, this guy does not appear to care about the truth.

The Washington Post’s fact checker blog marks the tally so high, he has averaged 6.5 lies per day during his time in office. (And that average would surely be higher if you counted the campaign.)

This point was forcefully driven home last week by the ongoing Stormy Daniels controversy, in which Rudy Giuliani has now enmeshed himself.

In a nutshell, Rudy said Trump knew about the hush money payoff and repaid his attorney, Michael Cohen. That caused an uproar because it contradicted what Trump and his spokes-parrots have been saying since the story first broke.

Then Trump backpedaled and said Rudy is new and didn’t have all the facts, and went back to the original story.

In other words, it’s been chaos. They don’t know which lies are official and which are merely the smokescreen.

It’s apparent that any relationship between what this president says and the truth is purely coincidental. He says stuff, it blows up, then he says other stuff, and that blows up, so he says some more stuff.

It’s like they (the president and his in-house enablers) say things that they think will make everything better. When it doesn’t, they try again to seek the Magic Words that will solve their problems. It’s like the White House is run by a team of 4-year-olds who have stolen cookies. They will say anything they think will make the criticism stop. Unfortunately, none of their statements ever seem to be the truth.

I’m sure the psychology behind this pathological lying is fascinating. Why would any rational man lie about so many things that are so easily refutable? 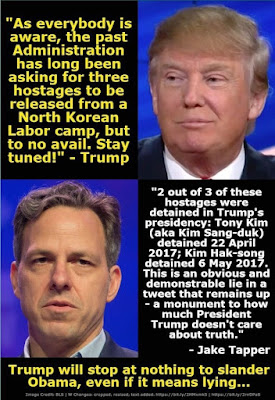 My guess would be that as a wealthy man, he’s surrounded himself with yes-men and sycophants all his life, who does his bidding unquestioningly. Heaven forbid anyone in his orbit correct one of his misstatements; that would rate an economy-class ticket on the rocket ship leaving said orbit.

You could tell that from his Apprentice show alone. Everyone was all “Yes Mr. Trump, No Mr. Trump, You’re right, Mr. Trump,” as he sat in the big boardroom chair and lapped it up.

What’s even more disturbing is how his fan base believe every word he says, or at best, doesn’t care that he’s lying. I figure it’s either tribalism run amok or, the inability or unwillingness to accept anything that runs counter to their favored narrative.

It certainly helps that Republicans have been raging about “the Liberal Media” at every turn. When conservatives spend decades blasting the reputation of the one group dedicated to uncovering the truth, you can’t be surprised when the tribe doesn’t believe anything they hear from said media.

I think that’s where the lack of education comes in. It’s no surprise that Trump’s base is strongest in those states that routinely pull up last in the country in education levels and test scores.

That’s what’s so funny/terrifying about this Facebook status I saw today from the ultra-conservative group, The Federalist. 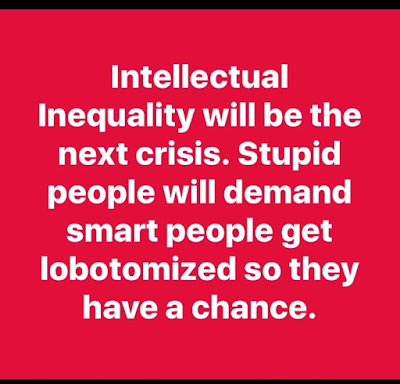 I don’t think this blurb is really about education. It’s more of a dog whistle to the Trump racist base. The inference ignores any shortcomings of their own demographic and plays on the perception that the Democratic left is made up of black and brown people. And [nudge-nudge] “you know how stupid and lazy “those people” are…”

It’s a way to take a swipe at welfare, food stamps, Affirmative Action and any other aid that doesn’t go overwhelmingly to white males.

(Yes, I know that states like Kentucky have large populations of white people using all those programs. But that’s not recognized as a part of conservative reality.)

Ignorance is the only way Trumpism succeeds. There aren’t enough millionaires in the country to outvote everyone else voting in their own economic interest. So the more they can harp on emotional “wedge” issues, the more they can keep people’s attention “over there” while they raid the treasury and toxify the environment for profit “over here.”  They’re like magicians, who make the middle class disappear.

Even the lobotomized should understand that.
Posted by bluzdude at 6:42 PM