My apologies for not posting yesterday; I was celebrating Memorial Day with my babeh, and keeping a day of remembrance of those who served and died protecting our right to be batshit crazy.

This morning I saw possibly the dumbest op/ed I’ve ever seen. Granted, it was in the hard-right newspaper/website, The Washington Times, so the bar was pretty low. But still…

Apparently, the reason no one will compromise on gun laws is that the Second Amendment is a God-given right, (along with the First Amendment).

Who knew Thomas Jefferson was the 13th apostle?

After that lead-in, I directly concluded that the rest of the argument could be disregarded out of hand. 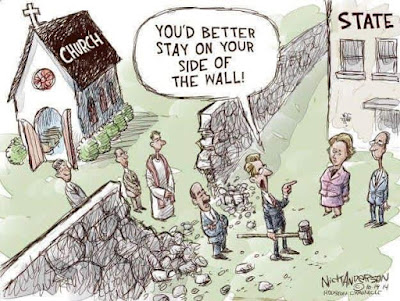 But curiosity got the best of me.

According to their opinionator, “Citizens of America have Second Amendment rights because they live and breathe — not because government officials have chosen to bestow them with such, as some sort of privilege.”

You mean like the government officials who wrote the original document?

They go on: “We know this because our country was founded on the principle that our rights come from God…”

I know what they’re getting at though. The Declaration of Independence includes a reference to an Almighty: “all men are created equal, that they are endowed by their Creator with certain unalienable Rights, that among these are Life, Liberty and the pursuit of Happiness.”

But the Constitution, the rulebook, if you will, contains no reference to religion other than the big one, right out of the gate, in the First Amendment: “Congress shall make no law respecting an establishment of religion, or prohibiting the free exercise thereof.” 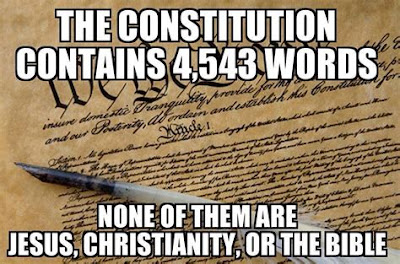 So we’re supposed to believe that because in a document asserting our right to independence, our founding fathers included God-given rights to life, liberty, and the pursuit of Happiness, that another document which never refers to religion (other than staying out of it), bestows a God-given right to semi-automatic weaponry.

That is indeed a reach of Biblical proportions.

Later, the author makes an attempt at logic to try to refute the common argument that, if there are limits to the First Amendment, so why can’t there be any on the Second? She brings up the “Fire in a crowded movie theater” cliché:

“First off, screaming “fire” isn’t speech. It’s screaming “fire.” (OMG, Seriously?) Founding Fathers, when they penned that particular portion of the First Amendment, weren’t trying to protect nuts who falsely scream “fire” for the fun of it. They were protecting primarily those who speak critically of their government.”

I wonder if they ever heard about libel or slander laws. Those are limits on the First Amendment and have nothing to do with nutty public behavior.

Also, were the Founding Fathers trying to protect the right of rich people who claim it’s “free speech” to anonymously funnel unlimited millions to political representatives to buy influence? The NRA relies mightily on that government-given right, which was granted by the conservatives on the Supreme Court when they ruled on Citizens United.

Obviously, this crowd is fine with “government-given rights” when those rights align with their politics.

The writer goes on to criticize a New York Democratic candidate for Congress, Pat Ryan, (which was the point of the whole column), over his plan to ban semi-automatic weapons. Ryan’s quote:

“The line to me is, the weapons I carried in combat [in the military] for 27 months should not be on our streets.”

“Well, the line to law-abiding Americans is the Second Amendment. And with all due respect to politicians who want to talk and politick and trade and barter for gain at the ballot box, fact is: God-given trumps government granted.”

Seriously, we have a God-given right to military weaponry? God, through the Founding Fathers, gave us the unalienable right to killing machines that wouldn’t be invented for more than another hundred years?

This is what happens when you mix religion and politics… you get a hazy stew of half-truths, misinformation, faulty logic, and self-interest. 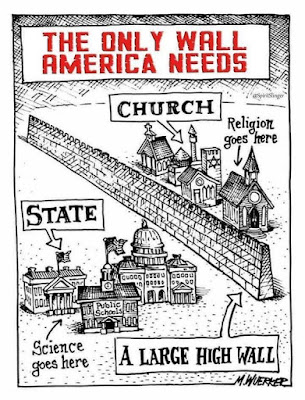 Basically, it’s “God gave me Liberty, and my liberty is to own guns that go ‘Budda-budda-budda’ and destroy anything it hits.”

I can never get over how the same people who extol this country’s freedoms and greatness are also trying to turn us into a pseudo-Christian version of Iran.
Posted by bluzdude at 6:19 PM