Lottsa stuff going on since I last wrote about politics and what do you know? It’s the same damn stuff! So let’s look at some things I’ve pulled off Facebook over the last three weeks and see if it floats. 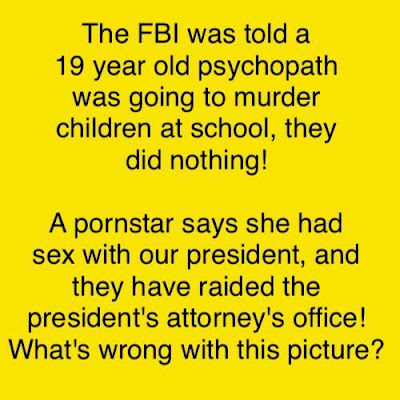 OK, this is from back in May so it’s a little stale, especially since former Trump fix-it lawyer, Michael Cohen, is now singing like a bird to the Mueller team.

This graphic contains a common problem with Republican memes… they try to compare two things that don’t warrant comparison. These situations are not remotely alike.

With the school shooting, there were some random notifications to the FBI about the guy who turned out to be the shooter. Yes, someone probably should have checked it out in a little more depth. But remember, there were no real actionable items. People said the guy gave them the creeps and was weird.

Well, that defines a significant percentage of the American population. You can’t just snatch up every oddball and social misfit. I know conservatives would desperately wish that to be true; just look how they’ve been trying to rid their communities of black boys cutting the grass or black girls selling lemonade, or black families at the neighborhood pool.

But what if the FBI started investigating every case where someone gets a weird vibe from a neighbor, maybe hearing shots fired in the yard, or yelling coming from inside the house. What happens if they start confiscating guns and locking guys up based on nothing but someone else’s heebie-jeebies? We’d have to let all the drug dealers and murders out of prison just to make room for the incoming.

On the other hand, the FBI had enough actionable evidence to secure a subpoena allowing them to conduct the raid on the lawyer’s office. And that mere act sent the Administration into a panic. Think they’d be panicking if there was nothing shady going on?

Also, it didn’t seem like “the porn-star” business had much to do with that raid. The Feds had plenty of other areas of inquiry. Subpoenas in a case like this aren’t given out willy-nilly. There has to be serious evidence of wrongdoing.

This theme is designed to do one thing: smear the FBI in the court of public opinion, so that when they start issuing charges against this president and his crew, their faithful sheep will bleat about bias and unfairness, rather than consider the gross misconduct and lawlessness of this administration.

Still with the Obama Stuff 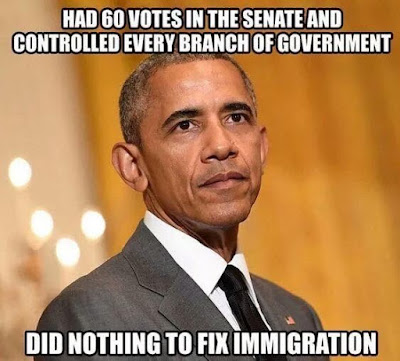 First of all, the Democrats only had a filibuster-proof majority in the Senate for a short time. Remember how the Republicans kept appealing the recounts of Al Franken’s election to the Senate, so to eat up the time the Dems had? Then once the full 60 was sworn in, one of the first orders of business was the Affordable Care Act. And as opposed to what the common Republican talking points say, it was not rammed through; it took months to be debated and eventually passed.

There was also the Bush Recession to address, so the economic legislation sucked up a lot of time and energy. And that worked. Every economic chart you look at (other than those from Fox “News,”) show an almost immediate turnaround at the beginning of Obama’s presidency.

Immigration wasn’t exactly a front-burner issue. Sure, it wasn’t a perfect situation, but it wasn’t a crisis either. The whole subject is only a crisis to scared white Americans who think their influence is waning, and who don’t like pressing “2” for Spanish.

Then once the Democrats lost their super-majority with the 2010 elections, (and control of the House), the Republicans could and did filibuster everything else the president wanted to do for the rest of his administration. So there was a very short window for the Democrats to act unilaterally, and the product of those actions was universal health care and economic recovery from recession.

So excuse them for not deporting enough brown people.

Alibis for Caging Kids
Since the religious angle didn’t catch on, Republicans are trying out other rationales, to show support for their leader’s draconian border policy. 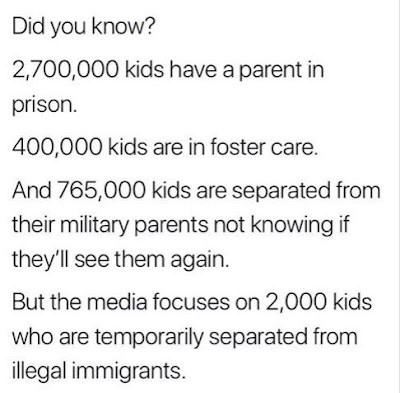 More false equivocation. This one is a slam dunk to debunk.

2.7 million kids who have a parent in jail, aren’t in jail themselves.

400k foster kids are not held in captivity either, surrounded by people with whom they don’t know and cannot communicate. While the foster program has issues, most foster parents are decent people trying to help kids in bad situations.

And 765k kids have parents who nobly chose to go into the military knowing the situation that comes with that service. And again, the kids are not locked up in mass barracks, cut off from everything they know.

So OBVIOUSLY, the media focuses on the current tragedy going on at our borders. That’s their job, to tell the public when there’s an atrocity taking place.

This, from the self-proclaimed party of Family Values. It's clear to me that the only families they value are white, American ones.

This one tries to break down the dumbness even finer, with an attempt at logic. 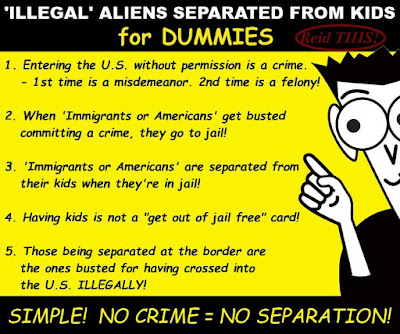 Yes, they lay out the illegalness step by step. But again, they miss the main point… when people go to prison, the kids do not, because you just don’t put innocent children in a fucking jail! 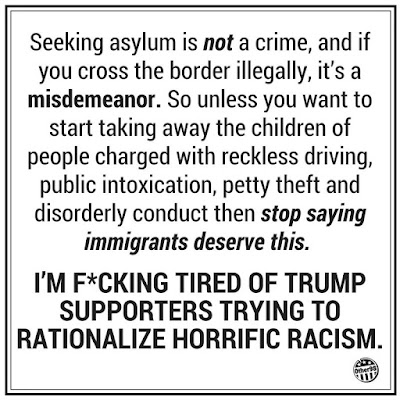 It’s funny how conservatives revere the law when it’s someone else breaking it. But when their administration officials commit felony after felony for things like lying on their financial disclosure forms, that reverence for The Law comes up missing.

Civil Discourse
I’ve had mixed feelings about the new tactic the left has taken up, of confronting influential people they encounter out in public. I think we should be better than that. We should wage war with ideas and leave the in-your-face bullying out of it. 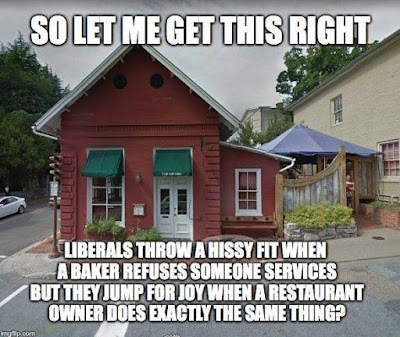 It's funny how whenever you see a meme that starts out, "So let me get this right," they so rarely do.  Talk about missing the point, or at least willfully distorting it.

Yes, we had a hissy fit because everyone should be served at a place of business, not just those with whom you share a belief system. Conservatives started this very thing with their embargo on selling cakes or flowers for gay weddings, pursued it clear up to the Supreme Court, and won (with a hand-picked right-leaning court).

Plus, they’ve spent the last 10 or so years publicly coarsening the quality of debate. 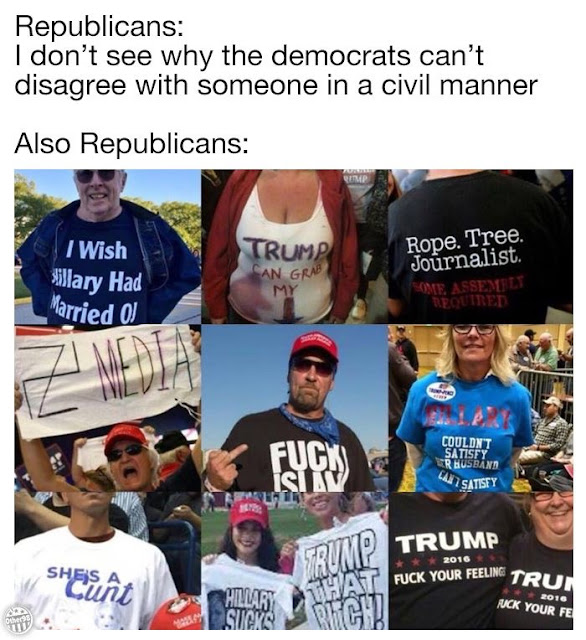 But the first time it comes back on them, they want to whine about it. And they call liberals “snowflakes.” Maybe someone should design a “Karma for Dummies” meme because this is karma coming back to smite them right between the eyes.

If the right doesn’t start up the non-service movement, then they don’t get non-serviced themselves. A simple concept for simple-tons. 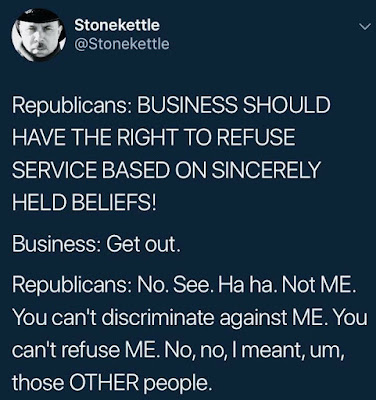 So after further consideration, my opinion has evolved closer to this: 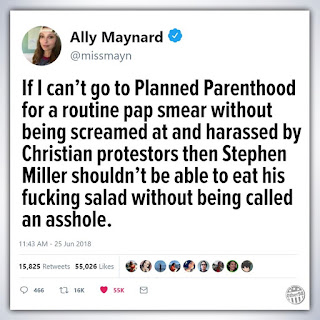 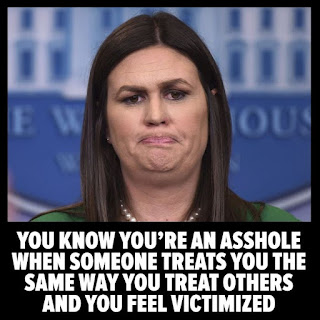 It’s a classic case of bullying, where once the bully gets hit in the mouth, they want to cry foul and play the victim.

Final Thought
One last note on the resignation of Scott Pruitt, as EPA chief.

I don’t think it makes a damned bit of difference. Even before I knew who the replacement was, I knew it would be more of the same. An oilman leaves, then we get a flak from the coal industry.

Best case scenario: the next guy spends a little less taxpayer money on himself while he disassembles the EPA. Either way, regulations get rolled back so polluters can go back to polluting the way they used to, while the atmosphere becomes visible again and the earth floods and bakes.

Nothing changes until this crew gets voted out. We start this November with a chance to retake Congress. If successful, that may help hold 45 in check until we can toss him out on his ass in 2020.