Let’s look at some more conservative misinformation, harvested in the wild from my Facebook timeline. 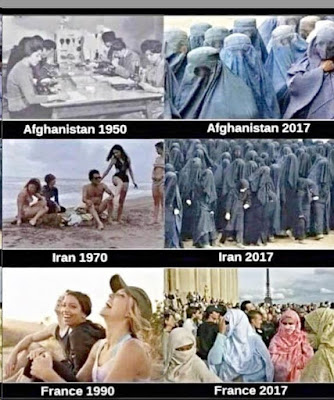 This came with the caption: "Don’t think this can’t happen in the USA."

This can absolutely happen in the USA, but not for the reason the poster is inferring. (I presume the author thinks it’s a Muslim or immigration issue, but I could be wrong.)

In the top two segments, the real cause is religious extremism coming into power. It just so happens that these were both predominantly Muslim countries, so the result was Muslim extremism.

Here at home, this is already beginning with Christian extremism. Look no further than the draconian abortion laws passed in Ohio, Mississippi and Georgia, which translate into banning abortions before many women even know they’re pregnant. (Obviously, these laws were created for the express purpose of being tried before the Supreme Court, in an all-out attempt to overturn Roe v Wade, while there is a quorum of conservative justices on the bench.)

When laws are passed to restrict abortions AND birth control, it can only mean that the subjugation of women is the primary goal. If this path continues, it won’t be long until our “USA 2017” picture will look like this: 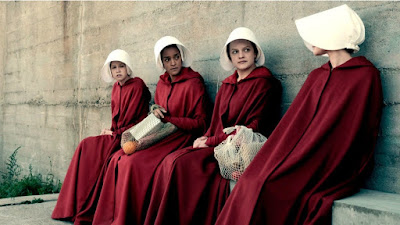 As for the part of the meme about France, I put forth that it’s not a compelling picture at all. it’s just 4 women in Muslim garb, in a crowd of other people. That could be from anywhere at any time. They could be tourists, for all anyone knows. 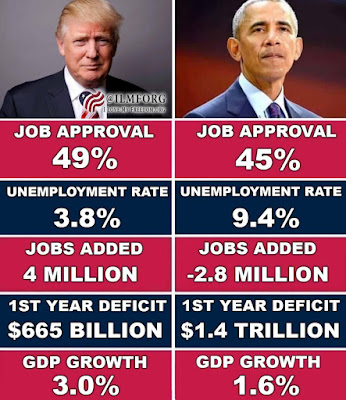 This is just willful ignorance.

I’m not even going to address the job approval percentages, because they vary greatly in time and by who conducts the poll. And I’m not vouching for the accuracy of the economic numbers, although I suspect the $665 billion deficit is a little light, especially after the Trump Tax Package passed. I’m really looking at the ratio between the two presidents and it’s clear that whoever created this graphic has produced a laughable case of ignoring context.

Because the creator is comparing each president’s first year in office, that means President Obama was just getting a grip on the recession left for him after the previous Republican’s eight years in office. All the numbers were way down and about to make a U-turn.

When Obama handed off the economy to the next occupant after his own eight years, he was handing off seven straight years of economic growth and falling unemployment. Trump is basically standing on Obama’s shoulders and bragging about how much taller he is. 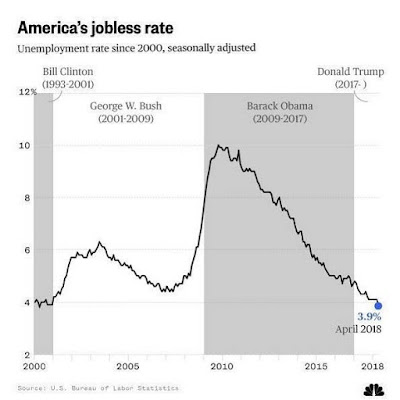 (This is evidence, not a new meme to debunk.)

The best that can be said for Trump at this point is that he didn’t screw things up (yet). Numbers improved each month and that continued. But it does mean that he doesn’t get credit for the gross number. He should get credit for any gains of more than the economy was already gaining. (And that ain’t much.) 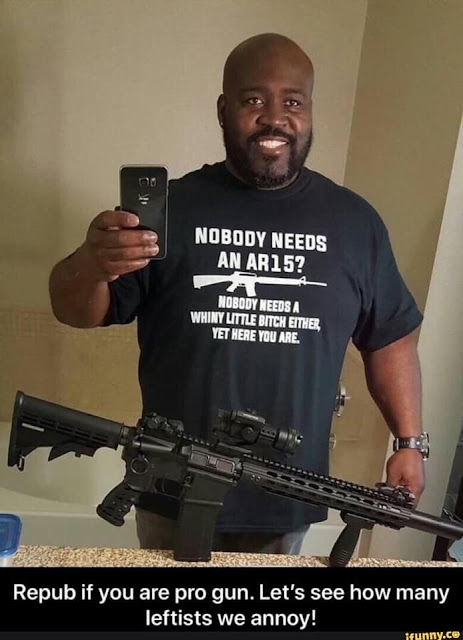 Because annoying liberals is worth thousands of innocent lives…

Dear Gun Nuts,
If you want to talk about whining, how about the whining that comes from protecting your fetish from those who don’t want to be killed by it?

Everyone says, “But I take care of MY gun… I know how to use MY gun… No one can get to MY gun… I’ll teach MY kids how to respect it… The mother of the Sandy Hook shooter did everything “right” too. It’s all perfectly safe, right up until it isn’t and by then, it’s too late.

It’s not whiners you should be concerned about… it’s the mourners, like the of thousands of widowed men and women and children who have to grow up without a parent.

Please find another way to create stirrings in your big boy parts and put the military death machines away. I’m sure you can still feel like a real man with a pistol or standard rifle.

Or maybe just go buy a big truck instead.
Posted by bluzdude at 6:31 PM

It's virtually impossible to find a kernal of truth, honor, nobility or humanity in right-wing memes, threads, etc. There's a perverse, Orwellian quality to pretty much everything coming out of their tiny minds, and that's been true for most of my adult life.

I hope that by pointing out things like these, it shows people that you can't trust anything these people say, without independent verification. Especially Facebook memes.

If its on the internet it must be true. Right?

Exactly, and especially if it seems to confirm your biases.

re: The changes in Afghanistan and Iran - both were the result of one or both of the "great Powers" interfering in these nations' affairs. Had the US nad USSR left these countries to their own devices, it's likely that neither the Taliban nor the Ayatollahs would ever have gotten into power.

I so wish I had the guts to shout these types of arguments from the rooftops. Instead, I let all of it get under my skin and wear down my hope. Thanks for getting this common sense stuff "on paper" to help those of us who can't express it feel validated.

Glad to help. (Boy, you were really reaching back for this one, huh?)