I feel like we need a diversion from the political abyss that has been our roster of current events, so let’s talk about something more frivolous, yet topical (for today, anyway). 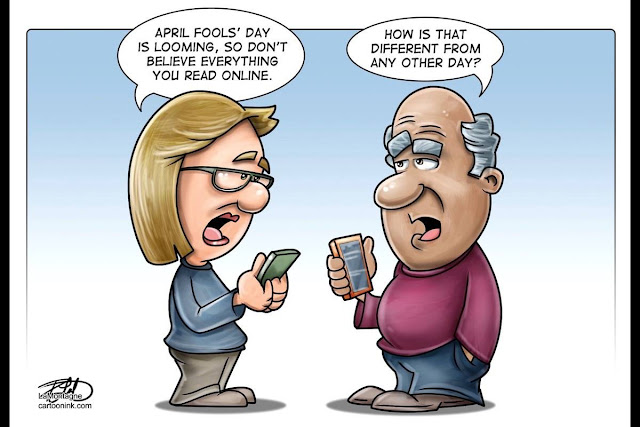 I love a good prank. I used to be notorious for playing pranks, whether in the office, for April Fools or just for the hell of it. I’ve posted about some of them before, like doing office pranks, including a prank on one of my best friends, more office pranks, and then one from my youth that took about a year to fully play out.

As I learned in my youth, the best pranks are played in the mind, where no one gets hurt and nothing is damaged.

I haven’t done any in ages, though. The closest was the time I was the last one sitting on one end of the floor. I was the only one there for about three weeks. It was a time of upheaval with our company, as we had just moved to a new office building and our company had just been sold.

Anyway, the new department to which I was reassigned was coming to move into my area at the same time I was about to go on a week’s vacation. I wanted to welcome them to my little neighborhood, so since I couldn’t be there, I posted a sign.

No, it wasn’t really a prank, just a bit of whimsey, but it was something that isn’t usually done around the conservative hallways of financial services companies.

The funny thing is, when I came back from vacation, the sign was still there. I took it down, wondering how it went over. No one had said a word. Finally, about a month later, I asked someone I’d become friends with, and she confirmed that it was indeed well received. I supposed they wondered what kind of a weirdo they would be working with.

Today I was able to pull one off that I conceived of about six months ago. But to tell the story, I have to start with a little background.

It’s funny how the older you get, the less you give a shit about what people think, and the more likely you are to speak your mind.

In my job, I manage a fleet of vehicles and to do so, I work with a couple of outside vendors. I am their customer and they provide services. And sometimes, they can really bungle things up, sometimes to the point of costing my company money in wasted time and inconvenience.

For example, they may promise to deliver a car to a new driver, but come the day of supposed delivery, they hadn’t even contacted the driver yet. Our guy is waiting at home, dead in the water, and they’re sitting on their thumbs.

In such circumstances, I get on the phone with the vendor and, well, give them hell. I want to rattle the cage a little bit, to let them know in pointed terms that they are disappointing their customer and costing us money in lost time and productivity. Fix the problem, don’t let it happen again.

And because my office is a low-walled “open-floorplan” cube farm, I am known by my group as the guy who goes off on people. In fact, when I get going, I can hear all the typing and clicking stop, like crickets that silence in the presence of a jungle predator. Occasionally I will hear a gasp, or a giggle, which lets me know the peanut gallery is open.

Also, in most cases, I’m speaking with my account rep, who wasn’t the one who screwed up, but she’s the one who relays my unhappiness to the department that did. I’m basically just venting and she knows I’m not directing it at HER. But that’s a nuance that doesn’t translate well to office eavesdroppers.

I always apologize for the sideshow, because it’s not my intention to infringe on their trains of thought. I don’t want to be mean, either. I don’t berate anyone or curse at them. But I do make it clear, in pointed terms, that I expect better out of my vendors and have no tolerance for excuses, especially for recurring, avoidable problems.

Often, during these “post-mortems,” when I’m telling my group what the story was, the memories will start.

“Remember that time when he said…”

It was during one of these sessions that I decided that on April Fool’s day, I should really give them something to listen to. The only question was whether I’d follow through on it or not.

I was really on the fence. In this day and age, you never know who’s going to get upset about something or tell a damaging story to someone in charge.

Then this morning I saw the box of donuts in our common area. Score! Nothing like a nice donut to brighten your day. I opened the box only to find a big tray of carrots, celery, and dip. Gah! I’d even seen that trick shown on Facebook but fell for it anyway. (Although there was an actual box of donuts under the one that had the veggie tray, so I still got my donut.)

So, this afternoon, when everything was quiet, my desk phone rang and proceeded to have a “call” with my vendor.

Me: Oh, hi, (vendor rep name) thanks for calling. So did you get that car delivered on Friday? What? Oh, you’re kidding…  You’ve got to be kidding me. We talked about this! I made this request three weeks ago! You mean you’re just getting on it now? This is unbelievable.

I can hear the crickets stop, so I know they’re dialed in. (I was told later that one lady tapped another on the shoulder to get her to take her headphones off and listen.)

I hear a giggle.

Me: Look, you’re not the only vendor out there. Other vendors are ringing the phone off the hook trying to get our business. Maybe it’s about time I started answering the calls.

Time for the kill.

Me: This was supposed to be delivered on March 29th. What day is it today? What day is it TODAY? That’s right, April first. APRIL FIRST… otherwise known as… April Fool’s Day.

“He totally got her!”

I stood up and said, “Yeah, and there wasn’t even anyone on the phone. April Fools!”

I had dialed my desk phone from my cell phone. Much laughter ensued.

The old double-whammy. Works every time.
Posted by bluzdude at 6:25 PM

They were still talking about it on Wednesday. People who were there where telling those who missed it all about it.

Cool beans...I never knew you were that funny...Gruntys can be complicated. Your getting brash. Good for you. Good one!!!